Round 11: Nicolai Herzog vs. Olle Råde 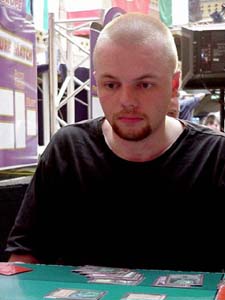 In the eleventh round of the 2002 European Championship, former European Champion Nicolai Herzog faced a Swedish Magic legend, Olle Råde. With 6-4 records, both were out of contention for the Top 8. The two players know each other well, and so the atmosphere of the match was really friendly throughout the match.

Olle won the coin flip. "I do not want to start. Nah, I want to start," he smiled, and drew his hand. It consisted of four lands and three spells, including a Nantuko Shade and an Engineered Plague. After thinking for a good while, he decided to keep the hand, in spite of it being quite slow.

Herzog kept his hand as well, and Råde dropped a turn two Nantuko Shade. The Shade hit for five during the following turn, but Herzog used a Chainer's Edict to get rid of it. Then, Herzog cast a Phyrexian Arena. On his next turn, he played his first creature. "Spiritmonger?" Olle wondered. "Nah, quality creature," Herzog replied, and placed the Spellbane Centaur on the table: "Take that!"

Råde played an Addle on his turn, calling green. Nicolai revealed his hand, it contained an Armadillo Cloak, another Phyrexian Arena, a Spellbane Centaur, a Pernicious Deed and a Llanowar Wastes. "What to take?" the Swede wondered, then he decided to go for the Cloak. A Mutilate took care of the Spellbane Centaur.

Then it was Nicolai's turn to see Olle's hand. He played a Duress, which revealed a Haunting Echoes, a Corrupt and the Engineered Plague. The Norwegian chose to remove the Corrupt, then he played the other Spellbane Centaur. Olle Duressed him during the next turn, and took the Deed. Then he cast his Haunted Echoes, and got to remove all Chainer's Edicts, Armadillo Cloaks, Spellbane Centaurs, Duresses and Pernicious Deeds from Nicolai's library. "Tainted Pact? What is this deck?" Olle wondered.

Herzog decided that it was time for another Phyrexian Arena. Råde, however, had total control of the game. He Chainer's Edicted the Centaur in play and cleared the table. And when Nicolai cast and flashbacked a Call of the Herd, a Diabolic Tutor gave him the Mutilate he needed to kill the Elephants. Finally, he finished Nicolai off with a Corrupt.

After losing the first duel, Herzog wanted Råde to play first in the second match. The Swede played a swamp, then Herzog dropped a turn one Birds of Paradise. Unfortunately, Råde had a Chainer's Edict that prevented the Norwegian from getting a quick start.

Råde cast an Addle, naming black. Herzog revealed his hand, it consisted of three lands, two Spiritmongers and a Phyrexian Arena—and the latter soon found itself in the graveyard. The two players dropped lands only for a few turns, and then Nicolai slapped Braids, Cabal Minion on the table. "Damn!" Olle said, he had three lands only on the table, and had to sacrifice one of them. 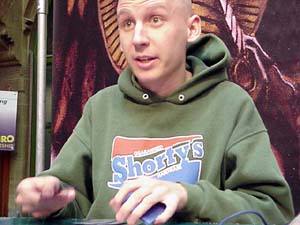 Herzog had the initiative in the game, but Råde somehow dealt with the threats. An Innocent Blood took care of Braids. A Slay killed a Spiritmonger. Another Innocent Blood killed the other Spiritmonger. Two Elephant tokens died to a Mutilate. A Jade Leech was able to attack twice, but once it was joined by an Elephant token, both creatures died to a Mutilate.

Finally, Herzog tapped out to play his last two cards in hand, a Jade Leech and another Braids, Cabal Minion. "How can I win this?" Olle wondered. "Mutilate and a land?" Herzog replied. Unfortunately, Råde didn't have a Mutilate. He Slayed the Jade Leech, but Braids kept his land total down. A Duress showed that he had three Corrupts in his hand, and they stayed there until he ran out of life a few turns later.

Råde chose to play first in the third and deciding game. He kept his hand while Herzog had to mulligan. "It was like one swamp and a lot of Spiritmongers," the Norwegian commented, and kept his second hand.

Nicolai played a turn one Duress. Råde's hand consisted of an Addle, a Chainer's Edict, two swamps and two Cabal Coffers, and Herzog chose to take the Edict. Råde then played Addle naming green, and Herzog showed his hand—a Wild Mongrel, a Duress and two Phyrexian Arenas, but no third land.

Drawing a fourth land, Herzog played his first creature of the duel, an Elephant token. The token was promptly Chainer's Edicted away. Herzog played a Jade Leech, looking disheartened, and he had reason to be. The Swede used his Planar Portal, and a Corrupt that knocked Herzog down to eleven life. A Chainer's Edict took care of the Leech, and facing a very active Planar Portal, Herzog decided that it was time to concede.