Round 11: Noah Boeken vs. Eugene Harvey 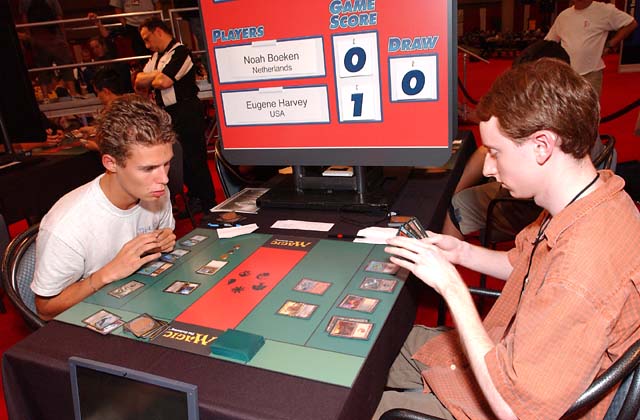 Team USA was the talk of the tournament yesterday - but not for the usual reason. National Champion Trevor Blackwell was in dead last, 295th of 295 active players thanks to his 0-6 mark in Standard. Eugene Harvey and Brian Hegstad both put up a 3-3 mark and the 6-12 squad found itself in 43rd place overnight ahead of just four countries. Team USA has the room buzzing again today because they have yet to drop a single match. Each of the three went 4-0 in rounds 7-10 and they had clawed their way up to 7th. 2000 Euros Champion Noah Boeken, who made the Top 8 at Dutch Nationals, but failed to make the team, was looking to put an end to Team USA's streak when he took on Team CMU's Harvey (playing in his first Pro Tour) in a round 11 Feature Match.

Both players drafted three allied colors during the draft and both included black and blue as two of their colors. Harvey had a lot of red, though, while Boeken had plenty of white. Game 1 was all Harvey. He went first and played turn 2 Shivan Zombie, turn 3 Phyrexian Rager, turn 4 Urborg Skeleton with the kicker, and then on turn 5 he removed both of Boeken's creatures (a Helionaut and a Razorfoot Griffin) with a Reckless Spite. Boeken found himself at 9 with no non-land permanents as he started his 5th turn and he could manage nothing better than an Ordered Migration for 2. Harvey added Mire Kavu to his team and Boeken quickly scooped up his cards so he could start shuffling them. 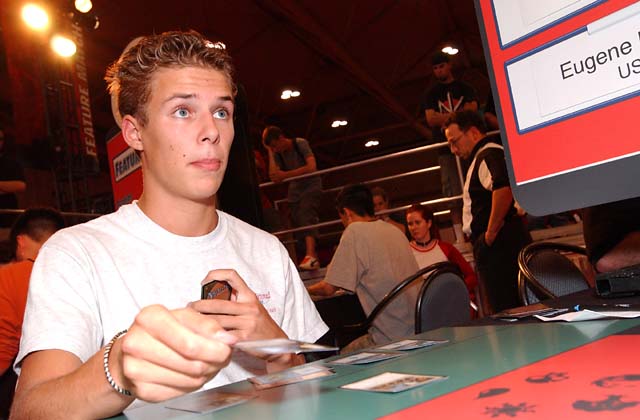 Game 2 was a lot more even. Harvey didn't have a creature until his turn 4 Mire Kavu, meanwhile Boeken played out Coalition Honor Guard and Meddling Mage. With Chris Pikula standing in the Feature Match area, watching, Boeken named "Reckless Spite." Pikula noted that his card is a lot better in Rochester Draft than Booster Draft. Harvey added Vicious Kavu to his team and sent both his Kavus into the Red Zone. Boeken used two bird tokens to double-block the Vicious Kavu and Harvey then played Rushing River targeting the Coalition Honor Guard and one of the tokens. With his Vicious Kavu still alive, two tokens dead, and Boeken forced to waste a turn replaying his Honor Guard, the tempo seemed to have swung in Harvey's favor. Boeken was forced to trade a summoning sick Stormscape Apprentice plus the last bird token for the Vicious Kavu so h could preserve his last 8 points of life. Then he had to watch as Harvey just Recovered it and played it again. After Boeken got Kangee and Stormscape Familiar into play, he was even more horrified when Harvey kicked up a Bog Down and cleared out the rest of his hand (Voice of All, Absorb, and Honorable Scout). Playing off the top of his deck now, Boeken did get Sea Snidd, followed by Tower Drake. 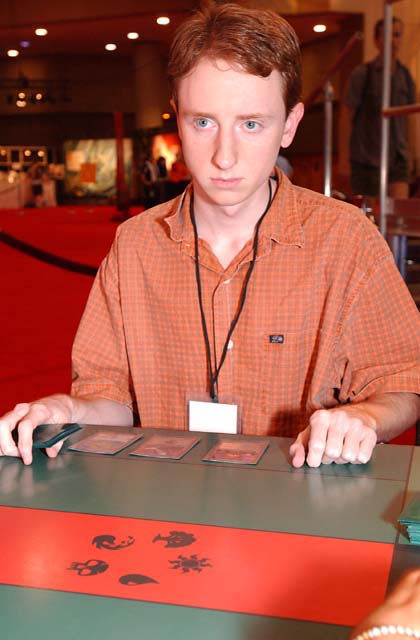 Knowing that Boeken's hand was empty and his own hand included a Vicious Kavu, Harvey then tried to sweet the board with Planar Despair. He first pointed Singe at Coalition Honor Guard, then played Despair for 3. Boeken responded by turning his only Island into a Swamp and suddenly 4 creatures survived. Luckily for Harvey, two of them were his (Mire Kavu and Lava Zombie). Harvey sent them into the Red Zone and Boeken tapped the Lava Zombie with his (now 0/2) Honor Guard. Boeken tried to take this back, but the table judge ruled that Boeken's actions clearly indicated a block. The head judge (upon hearing from all parties) backed up his table judge and the Honor Guard died in the combat. Boeken traded Sea Snidd for the Lava Zombie on his next turn, but he had no answers for the Mire Kavu or the Vicious Kavu that came down on Harvey's next turn.

Team USA's Thursday run at this point stood at 13-0!