Round 11: Noah Boeken vs. Wolfgang Eder 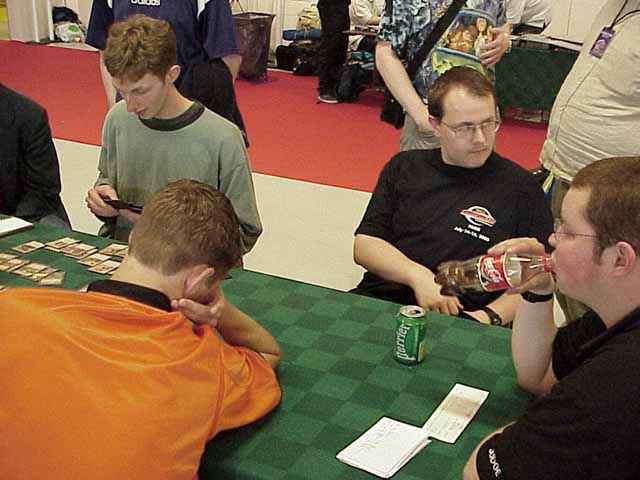 Boeken had been the talk of the tournament. His perfect 9-0 record after nine rounds had everyone reeling. It seemed more a matter of how far in the top eight he would go then would he make the Top 8. Now, he's got to feel nervous. After a close loss in the tenth round, Boeken lost handily in the eleventh.

Game one Boeken had a very good draw. Eder played first and at the end of Eder's turn, Boeken played a Vine Dryad losing a Wild Might. Boeken untapped and played a Gaea's Cradle and put out a Wild Dog. Eder's Steadfast Guard looked ok but Boeken followed with a Rancor and River Boa. Eder traded the Guard for the Wild Dog and then put out another Steadfast Guard. Still seemed like advantage Boeken. Fourth turn Cho-Manno from Eder looked like it would slow the game down a little, but Boeken still had a good attack with the Dryad and Rancor. Until turn five. The game nearly ended immediately when Eder played a forgotten card from Urza's Saga, Pariah on the Cho-Manno. Dirk Baberowski howled with laughter as did many of the spectators. With no Lyrist, Boeken had no way to do damage, and Eder's Rebel engine took over, winning a few turns later.

Game two saw Boeken take an aggressive mulligan. He had 5 land and his two spells weren't the better ones, so he took the redraw. His next 6 looked ok. He played Wild Dog first, then Rancored it second turn.

Unfortunately he didn't have a second land, and that would plague his efforts to win throughout.' Eder's Mother of Runes on the first turn didn't help matters. Neither did his explosive third and fourth turns which included a Nightwind Glider, Gaea's Cradle and Sergeant. A Rishadan Port left Boeken with no mana, and the Cradle assisted the Rebel Engine heavily. Eder won with the board filled with Rebels, including 3 Steadfast Guards, a Nightwind Glider, Sergeant, and Cho-Manno.