Round 11: Northern Lights #5 vs. Ubermenschen

This is probably the most popular match in the entire tournament, with a huge spectator turnout. And why not? This epic matchup of good guy vs. bad guy has been brewing all day. 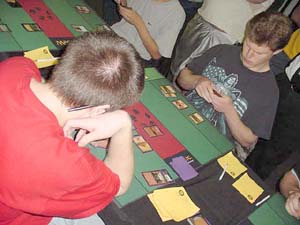 Nothing more needs to be said about the Ubermenschen, but the Northern Lights are enjoying their first tournament with the recently-reinstated Justin Schneider. He and Mike Long were once members of the infamous team Tongo Nation. It will be fascinating to see if the Ubermenschen can stand up to Long, Schneider, and Krzywicki.

I'll note before I get started that there was a slight argument over the use of the Red Zone playmats – apparently, all the players in this match hate them a lot. Regardless, the judge says that they have to stay.

"Can I start with ten cards, since your deck's that much better?" Justin Schneider asks Brian Kibler. Brian laughs and shakes his head. He takes an early lead with a bunch of green creatures, and Justin's left to catch up. Brian's Nefashu attacked and made short work of Justin's Wirewood Herald and Patron of the Wild. Next, Brian enchanted his Twisted Abomination with Alpha Status after Justin killed his Nefashu in combat, and sent the Abomination in.

Brian attacked with the Abomination again as Justin shook his head. "Just seven damage?" Brian asks – it's not Rith, the Awakener, but it will win you a game. One turn
later, Brian is victorious.

Mike Krzywicki requested that his opponent (Ben Rubin) have his deck counted by the judge before he cuts it. They're getting started a little later than the other competitors. The first creature is played on Mike's side – a Lavaborn Muse. Ben remained unfazed and played Daru Stinger, amplifying it for two.

When Mike enchanted his Lavaborn Muse with a Pemmin's Aura, Ben asked to read the Muse and then kept taking some damage, despite his having a couple of creatures in play. Ben frowned at his cards, then looked completely puzzled at Mike's attack. He ended up preventing most of the damage and only going to fourteen, still a comfortable cushion against future attacks. Ben dealt with the Muse and was left with a board full of white creatures. A few combat phases later, Mike concedes.

Ken Ho led with a couple of islands and a Raven Guild Initiate, and Mike Long answered with Goblin Turncoat. Ken threw a Lavamancer's Skill on the Initiate, and Long removes it quickly.

Long and Ken traded creatures in combat a few times, but Long always seemed to end up on top. Ken activated his Information Dealer at the end of Long's turn and spent a few minutes perusing his options.

"Whoa, whoa, whoa," Long says. "You're casting Pemmin's Aura on Warped Researcher? I'll play Cruel Revival. Bummer." Ken flipped up a Willbender to make things less horrible for him, but Mike argues with the judge that Cruel Revival has two targets and can't be redirected. Their game stays paused so that the judge can look up the ruling, and Ken looks angry. At least, as angry as Ken Ho ever gets.

When a judge shows up to see what's going on, Long says, "He's playing slowly!" and gets a laugh from the crowd.

The judge returns and rules in Ken's favor, allowing him to redirect the effect with Willbender. "It has only one target upon announcement," the judge rules. So, what was going to be an insane trade for Long turned out instead in Ken's favor, leaving him with six creatures to Long's three.

Mike topdecked Decree of Pain and cast it. "I might pull this one off," he said. And after said Decree, Long had eight brand-new cards in his hand. Things look very grim for Ken, but he managed to hold on for at least a few more turns. Ken then attacked with a Quicksilver Dragon, bringing Mike down to 13. Mike sent all his creatures back over to bring Ken down to five – Ken has only Quicksilver Dragon to defend against the Onslaught, and it's just not enough.

Justin got an incredible early start this game, with Wirewood Savage, Carrion Feeder, and Stonewood Invoker. But Brian did his best to recover, by playing Alpha Status on his Elvish Warrior. Brian tried his best to keep up, but he falls further and further behind. He cast Twisted Abomination to keep his other guys company, but Justin played Lingering Death to kill the enormous Elvish Warrior. A few turns later, Justin is the only one left with creatures in play as Brian's slow start won't allow him to catch up. 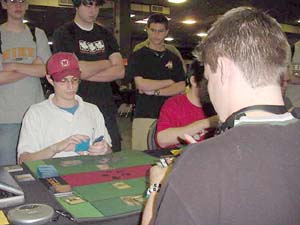 Game 2 in the B seat went incredibly quickly. After a few trades back and forth, Ben is left with a creature in play, but Mike Solar Blasts it out of existence. Mike then cycled a card with islandcycling, got an island, and threw it up and out of play – but said, "Hey, I didn't get an island!" He asked the judge to check his hand to verify that there wasn't one already in there, and gets another island.

However, a few turns later, an alert spectator noticed that extra island, and Mike concedes the game.

Ken and Long have very little time left for this game, but Ken is as calm as ever. Long is agitated, wanting to rush through the game, constantly asking how much time is left. I'd expect no less from him in such a pivotal game.

When Ken activated his Information Dealer at Long's end step, he couldn't control his joy. Ken attacked with his morph, then played Rush of Knowledge. With four new cards, he's calm and collected. Long's only option was to play Gluttonous Zombie and pass the turn, and he's so agitated he's bouncing in his chair.

Ken provoked the Zombie into blocking, then played Warped Researcher. Ken activated his Information Dealer and with three Wizards in play, caught a glimpse of the fourth card from the top. While the head judge is consulted for the second time this match, both Long and Ken studied the game state and plotted out their next moves. Ken receives a warning for looking at extra cards, but the extra card stays face-down on top of Ken's library.

Ken enchanted his Researcher with Lavamancer's Skill, then played Pemmin's Aura on the same creature. "Oh. Good," Long says sarcastically. Ken sent the Researcher out, and Mike blocked it with his remaining Shepherd of Rot. When Ken attacked with the Researcher and the morph creature, it brought Mike down to 12. He unmorphed Quicksilver Dragon, and Mike cast Cruel Revival to kill it and get back a Skinthinner. Even though Mike might have a chance to win, he concedes to get to a pivotal Game 3.

Brian mulligans down to five cards, left with few options at this point. He led with Wirewood Savage, but it died quickly from a Lingering Death. When Justin tried to enchant Brian's morph creature with Clutch of Undeath, Brian flipped over Zombie Cutthroat and let out a Zvi-like cackle of glee. This wins the race against Carrion Feeder with no problem. Justin's almost incredulous at this point, amazed that Brian can get so lucky after mulliganing down to five, and played out a morph creature of his own.

After Brian played an Alpha Status on his enormous Cutthroat, Justin played a Hunting Pack and weaseled his way around, saying that Brian committed to attacking when Justin led him to believe that he was simply declaring his attack step. Justin has enough to attack back and extends the hand to Brian shortly after.

Ken and Long have fifteen extra minutes in which to finish their match. Ken took about thirty extra seconds to play his first land; he's eager to win, but not as obviously as Long, who's fidgety and extremely restless. Ken enchants his Information Dealer with Pemmin's Aura. 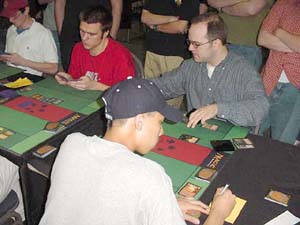 When Mike attacked, he pitched a Shepherd of Rot to unmorph his Putrid Raptor, surprising both Ken and all the spectators watching. Ken stayed thoroughly cool, and when Mike attacked again, he used Pemmin's Aura to pump the Dealer's toughness and take less damage from Long's attack.

Ken thought...and thought...and thought again. His calm collectedness is a direct contrast to Long's fidgeting, checking the clock, asking Ken to play back and not take so much time making decisions. Pardon me, but if I were in Ken's situation, I think I might take a while to make a decision, too! Long finally appealed to the judge to nudge Ken along, but this match has been a perfect demonstration of two vastly different and completely opposite play styles.

Long is now content to be ahead in the race. He has a horde of creatures in play, and Ken has that lone Information Dealer. Ken played Crested Craghorn and provoked the Raptor into blocking, but it's not enough to keep up with Long's attacks. He has to do something to win, and quickly.

Long's next attack takes Ken to two. Ken drew and played another island and a morph creature, and there's nothing that can save him now. When Long attacks for the victory, he does a violent dance in his chair that reminds me of a football player gloating about a touchdown.