Round 11: Not Just Good, but Great

match pits grizzled Pro Tour veteran Jelger Wiegersma against relative newcomer Julien Goron of France. With both players coming into the round at 8-2, this matchup features Jelger's black-white-green control deck (a.k.a. "The Roxodon Hierarchy") against Julien's white-green-black Greater Good deck sporting beefy creatures, green acceleration, and Congregation at Dawn. The crucial question: Can the slow resource-denial deck strip enough gas from the Greater Good deck to keep it from going off, and then put it away before it gets back into the game? 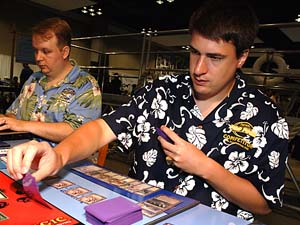 Wiegersma had to stay one step ahead of Goron

Goron began this one with a double mulligan, then had his hand stripped by two Castigates. The first revealed Congregation, Hierarch, Goryo's Vengeance, and Shizo. Congregation was removed from the game, followed by Vengeance next turn off the back of a new signet and Castigate No. 2. Goron looked to be out of gas as Jelger began running a City-Tree, but a Loxodon Hierarch followed by Greater Good looked like he might be able to get something rolling.

The Good was hit by Faith's Fetters and Goron chose to sac his elephant in response to find some more action. At this point Jelger had a Loxodon Hierarch of his own plus four tokens, but Julien summoned Yosei to even up the board with plenty of life on each side of the table. Jelger decided to continue with offense, sending in his team and losing the elephant to the dragon. Goron played a second Greater Good, sacced his dragon to lock down his opponent after swinging in, drew a fist of cards, and just like that looked to be in very good shape.

With just a wrath in hand, Jelger was looking much more uncomfortable. A Sensei's Divining Top joined the French player's side and all Jelger could draw was a useless second copy of Wrath. From here Goron's deck did what that deck does given the chance, playing huge creatures, gaining life, manipulating the deck, and drawing fists of cards off of Greater Good.

Jelger did what he could, but at this point his turns looked more like a good draft deck while Goron's turns had the card drawing muscle of a Type 1 deck. Various copies of Yosei and Kokusho showed up, Goron's hand continued to swell, and Jelger's turns began to consist of skipping badly needed untap steps. As the game wound down Julien showed his opponent two more copies of Yosei in hand and that was more than enough for Jelger to throw in the towel and head for his sideboard.

For this one it was Sensei's Diving Top plus Farseek versus a promising Nezumi Shortfang. Jelger began sending cards from Julien's hand, but he was stuck on two land and unable to develop his board for a follow-up. Fortunately for him his opponent was stuck on three land despite his spinning Top, so for now things were manageable as both players struggled to find more mana.

A Castigate from Jelger revealed Cranial Extraction, Bottled Cloister, Yosei, Wear Away, and Greater Good. Cranial Extraction left the game and the Rat Rogue sent in for one damage for a change. Goron at last found his land, using it to drop a Sakura-Tribe Elder in play, and Jelger found his next land as well. The game was on as Goron tried to get his gross engine online before the rat had stripped too much gas from his hand.

Greater Good came out and Jelger opted for Castigate rather than a Mortify on the Greater Good. Castigate hit Yosei, leaving Cranial Extraction and Bottled Cloister in his opponent's hand. At five mana, Goron simply said go rather than cast any of his spells. In response to the rat on Jelger's turn however, Goron roared into the lead with a Goryo's Vengeance on Kokusho, setting up a 10-point swing in life and a new set of cards for his hand off of Greater Good. 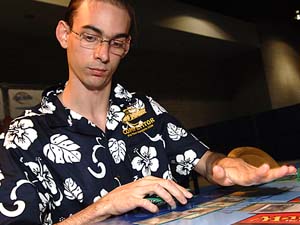 Jelger gave an audible sigh seeing the card, knowing it had come off the top since he'd just used Castigate to make sure the coast was clear. It's a scenario anyone who has ever played discard knows well; that painful moment where you've discarded your opponent down to something manageable but then they pull away with help from their deck at that crucial moment.

Kodama of the North Tree came out briefly, getting sacced in response when Mortify hit the Greater Good. Jelger went for Extraction on Yosei, but Greater Good No. 2 was followed by Kodama's Reach with Goryo's Vengeance for Kokusho spliced on, plus a sac to the Greater Good, for a completely ridiculous batch of card-advantage. Jelger did what he could, casting another Extraction, this time removing Kokusho from the equation, but that remaining Goryo's Vengeance meant that Kodama of the North Tree would be able to come in for lethal damage.

Considering his mana trouble and the number of cards his opponent had drawn it was an admirable effort, but for this match at least Goron's card-drawing engine had been simply too powerful and too robust to overcome.