Round 11: Oliver Schneider vs. Pierre Malherbaud 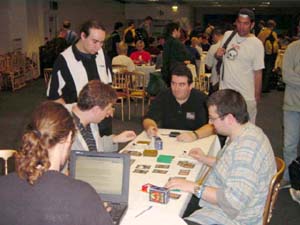 Last time these two National Champions met was in the European Championships where, after a very drawn out match, Pierre eventually emerged the victor 2-1.

For this Grand Prix Ollie was sporting the aggro-red/blue/white bear deck that a number of the Hampton Court crowd chose to adopt. Pierre, as always, had an unusual creation in the form of a Land Destruction Domain deck with fat creatures for the kill.

Ollie elected to play first and kept his hand whereas the bearded one had to mulligan down to six. A turn 2 Meddling Mage naming 'Collective Restraint' smashed onto the board in what was probably the best possible start for the Englishman. Pierre laid a Fertile Ground, which was subsequently 'Iced' in his next upkeep, giving Ollie the chance to play a Lightning Angel to continue his aggressive start. All Malherbaud could do was cast his first land destruction spell before Ollie then threw a second mage on the table - this time naming 'Void', and the beats continued. The first Mage was obviously a crippling blow, but 'Void' was not in his opponent's deck - but such is the gamble with Meddling Mages.

Pierre then cast 'Lay of the Land' to search for the right land to Vindicate the Meddling Mage naming 'Collective Restraint', but it proved too little too late as Ollie then swung for 5 more points of damage with his Angel and Mage, then showed his opponent an Urza's Rage.

"I defeat the evil Frenchman!"

Pierre just asked me not to say that he played Llanowar Elite at Worlds. A lot of friendly banter happened while they were shuffling up for the next game. 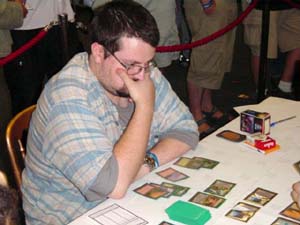 Pierre led with a first turn Chromatic Sphere, then Ollie once again managed to make a second turn Meddling Mage naming 'Collective Restraint'. In reply the Frenchman made a Destructive Flow, which Ollie managed to Aura Blast at the cost of only one land, but a second was subsequently laid and Ollie then found himself up against the wall with only one plains and a Mage to show for it.

Deciding it was time to go on the offensive Malherbaud to with the Sabertooth, then made a 'white-kickered' Rakavolver (Spirit Link 4/4). Throwing the Mages at the Rakavolver (which blocked the one naming 'Restraint') Ollie then finished it off with a Ghitu Fire, but there was no answer for the Nishoba as it sailed over repeatedly for the win. 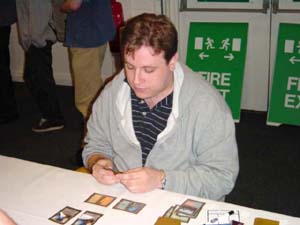 Surprise! Choosing to go first, Ollie once again made the Mage on turn two naming 'Collective Restraint' followed by a turn three Galina's Knight, whilst Pierre accelerated with a Fertile Ground into a 3/4 Emblazoned Golem. Ollie just sighed and could do nothing passing the turn back to his opponent, hoping to be able to disrupt a spell, but instead cycled the Disrupt on a Vindicate (targeting one of his land) to try to draw answers. Attacking the Galina's Knight into the Golem enabled him to finish it off with an Urza's Rage, but a Flametongue Kavu then devoured the Meddling Mage.

Ollie rallied with a Lightning Angel, but the loss of the Meddling Mage allowed the Restraint to come into play. With six land in play Ollie could both attack with his Angel and make a second Meddling Mage (naming 'Restraint' again), but a Global Ruin on the next turn effectively finished off the game. Ollie had to trade his 2/2 for the Flametongue, then watch as a Nishoba swathed a path to victory.

2 Chromatic Sphere 2 Lay of the Land