Round 11: Olivier Ruel vs. Kai Budde 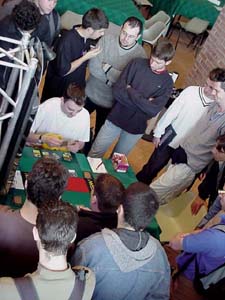 Kai Budde is unbeaten and three points clear of the rest of the field. Unfortunately this means he can't get the one point he needs for Top 8 by simply drawing in, as no one else can afford to yet. He was hoping to be drawn against Patrick Mello so he could concede against his team-mate and then ID in the next round, probably with Olivier Ruel. Unfortunately this round paired him against Ruel. The Frenchman will be a tough prospect as his blue-green deck contains three Wild Mongrel and three Basking Rootwalla. Budde's black-blue deck is pretty solid also and has Jon Finkel himself to help out.

Olivier Ruel used a typically eccentric method of determining who went first as he held up a card and asked:

So Olivier Ruel got to go first and somehow failed to manage to make a monster on the first and second turns with three Rootwalla and three Mongrel in the deck.

Ruel finally summoned a monster on turn 3 when a Puppeteer came into play. A Werebear thought about joining it but never made it because of Syncopate. Then Llawan, Cephalid Empress bounced the Puppeteer and left him high and dry in Ruel's hand.

Ruel tried to get some offense going with Ghostly Wings on a Rootwalla and backing it up with Bearscape.

Budde was looking solid though - both Cephalid Scout and a rampant Shadowmage Infiltrator started drawing cards for him. Ghastly Demise nipped the Wings off the Rootwalla and then an Afflict took care of the Nantuko Mentor the Rootwalla brought back with it.

Ruel bounced Finkel with Churning Eddy and then started Churning Bears out of Bearscape. Budde was drawing too many cards though and was able to draw enough removal to keep the bears under control while Finkel and the Scout nibbled away.

When Budde brought back the Aquamoeba he'd used to kill the Rootwalla with a Gravedigger Ruel knew he'd never be able to battle through and scooped.

After the game Budde asked Ruel if he wanted to draw. Budde admitted he thought Ruel's deck was slightly better but that his deck was also easily good enough to take another game and now Ruel needed to win two games while he only needed one. Ruel thought hard about it. If he lost this match he'd still be left needing a win and then hoping to be able to ID with someone. If he drew he'd only need to win one out of the next two games, a feat his deck looked strong enough to do easily. He decided to accept the draw that would guarantee Budde Top 8.