The game started off with a deck check, giving both players twelve minutes to kill. Osyp, whose name is pronounced "OH-sip," is a member of Team TOGIT and a frequent partner of CMU members in New Jersey. Two-time Masters Champion Ben Rubin needs no introduction.

"How'd you do in Jersey?" Osyp ventured, asking about the Team Grand Prix a few weeks back.

"Twelfth or eleventh," Rubin replied. "How'd you do?"

"Eugene had to leave," said Osyp, who was on the team with Mike Turian.

Ben chuckled. "Oh, right," he said, forgetting how Turian's team, which had been doing well that day, suddenly dissipated during the third or fourth round because Eugene had to leave in mid-day. "What did he leave to do?"

"He left for a piano recital," Osyp said. "He was getting paid for it and couldn't find an alternate. We thought he'd go later in the day, but the tourney ran late."

Rubin laughed. "He needs to get his priorities in order!"

They were still getting deck checked. Ben leaned over, a glint in his eye. "Armwrestle to see who goes first?"

Osyp thought it over, sizing Ben up. "Sure," he said. The two clasped hands and there was a brief struggle; Osyp's fist dipped and touched table, giving Rubin the first go. Osyp protested; "I'm definitely not that weak," he said... And he wasn't. By way of an answer, Ben Rubin rolled up his sleeve to reveal an arm trimmed with muscles to make Schwarzenegger jealous. "My God, you're a mutant!" cried Josh Bennett.

The judge came back. Rubin had three sleeves on three different cards that were a little scuffed up, getting him a "Marked Cards: Minor" caution; he had to resleeve. Osyp had to remove a German misprint from his deck - a forest that had been printed with Plains artwork, which the judges felt was confusing.

"You too," said Rubin, then added, "I suppose." He was smiling when he said it, though.

Osyp mulliganed, going down to six. Rubin signaled his strength by starting with a first-turn swamp; as was the case with so many of the top players today, he was playing Mirari Black. It wasn't clear what Osyp was playing from his first-turn island - Mirari's Wake? Infestation? Blue/Green? - but his second-turn forest cemented his selection; Osyp was playing a blue/green madness deck, featuring the usual assortment of Rootwalla, Mongrel, and so forth. He dropped a Rootwalla and passed the turn; Rubin Pacted at the end of Osyp's second turn to snag a Shade, then used his main phase to Innocent Blood the Walla before laying the Nantuko. 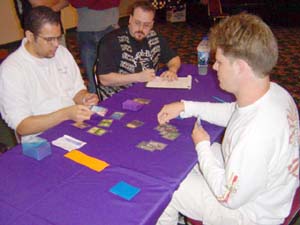 Osyp laid another land and created a second Rootwalla as a replacement for his lizard, but Rubin had an answer for that one, too - this time an Edict to remove the potentially-blocking lizard, which allowed his Shade to survive and swing for four.

Osyp was in trouble; as sometimes happens to madness players, he had a handful of Arrogant Wurms that were far too expensive without a handy cast-reducing Mongrel or Aquamoeba in play. He laid Tarnished Citadel, knowing that time was growing short. Rubin swung with everything and pumped it to eight, dropping Osyp to six.

Again Ben swung with Shade, saying "Six pumps." He could have pumped it to eight, but why bother? Six was enough to kill and replay the Shade in case of an Aether Burst - and sure enough, the Burst it came right on schedule, too, returning the Nantuko to his hand right after he'd pumped six mana into it. By leaving two mana up, he was able to replay it and passed the turn.

Osyp got his fifth land, considered, and played the Arrogant Wurm at full cost; with sickening predictability, it was Edicted and the Nantuko Shade swung for the game.

During sideboarding, Rubin discussed his drafts at Worlds, then asked how Osyp did.

"A thirty-two woman Hooters beauty pageant, my friend?" retorted Osyp loftily. "With me as the judge? I think not."

They shuffled, with no mulligans taken on either side.

Osyp led with the so-classic-that-Ted-Turner-has-Colorized-it play of Island, Careful Study, discard Rootwalla with madness and drop an island. What was unusual, however, is that Rubin didn't have the industry-standard first-turn Innocent Blood for the Walla... To which Osyp said "Whew!" in relief when Ben played a swamp and passed the turn.

Osyp continued the pressure by attacking with the Rootwalla and laying a Mongrel, hoping to overwhelm Rubin before he could set up. On his turn, Rubin blunted the assault by Edicting Osyp; the Basking Rootwalla, that eternal right-hand sacrifice to Mongrels everywhere, took Chainer's bullet. Osyp created another piece of Edict soakage in the form of a Sylvan Safekeeper and attacked with Mongrel, reducing Rubin to 17.

Rubin used his third turn to Rancid Earth Osyp's sole forest, then cried "No!" when Osyp laid a replacement the next turn, then attacked with Mongrel and Olle, dropping Rubin to 14. It looked like he had some hope...

Then Rubin cast Tainted Pact during his first main phase, zipping merrily past a swamp to scoop up an Innocent Blood. He laid another swamp... And then double-Blooded away both Rootwalla and Safekeeper.

In desperation, Osyp laid his last card on the table: A Phantom Centaur. Rubin, the polar opposite of Osyp cardwise, Scryed a fresh four cards into his hand, dropping to ten. 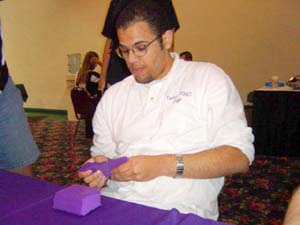 It looked grim. Osyp had one card in his hand - a Careful Study, which he exchanged for a second Phantom Centaur. Knowing that this is mono-black, chances are that an Edict or another Blood would take the Centaur that was currently on the board; he had only four lands, and he'd just used one of them to Careful Study. He passed the turn.

He Mutilated. Then laid a Nantuko Shade.

Osyp drew and got no land, but did find a helpful Aquamoeba. He laid it immediately, choosing the Moeba over the Centaur... But it got Butchered with two floating, the remainder of the mana going into a Mirari. Ben swung with Shade.

Osyp looked at the board and counted the Coffers and swamps; he had one turn to live at this rate, but that's assuming that Rubin would commit to a full-out attack in the face of a potential Aether Burst. He opted to Careful Study, instead no doubt hoping to draw a madness creature of some sort to soak damage until he could cast his Centaur with Edict fodder... But he drew two lands, and had to choose whether to keep a land or drop the Centaur into the yard.

He kept the land. It was a painful decision that turned out to be the wrong one, as his deck coughed up a land for his next draw, leaving him with nothing. Studiously avoiding an Aether Burst that wasn't there, Rubin swung twice for the win.

Afterwards, Rubin asked Osyp: "Did you put in Envelops?" Osyp said no; the Mirari Black builds can just double all of their spells in the late-game and overload the blue/green player's counters. Instead, he chose to go for a quicker build to try to overwhelm Rubin - and unfortunately, the cards just weren't there to make that gambit pay off.

4 Careful Study 3 Roar of the Wurm