Round 11: Patrick Mello vs. Johan Sadeghpour 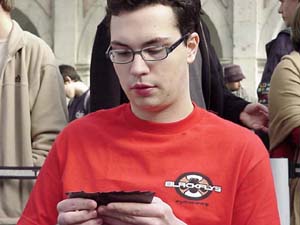 These two established Pros get less of a spotlight than they deserve. Patrick hasn't had a feature match since World Championships in Toronto last year, while Johan hasn't had a feature match since his Masters Top 8 in New Orleans. Both players are Pro Tour Regulars, but because Masters doesn't give any Pro Tour Points, at the time they entered this match, Johan wasn't qualified for Pro Tour Osaka.

Johan won the dice roll and decided to start.

Both players seemed happy with their opening hands and play started slowly with some dual lands involving blue and some Wastelands. Johan Tithed, and then tried Blessing his Wasteland, Impulse and Tithe back in. Patrick Impulsed in response and allowed it to resolve. This was a slow start for the Walamies deck Johan was playing, and he ended his next turn without playing a land. He attempted to Tithe at the end of Patrick's turn, but having missed a land drop Patrick had to think long and hard before deciding to let it resolve. Johan also Impulsed at end of turn, tapping out despite being aware Patrick was running a main deck Disrupt.

Looking for an elephant, or some sort of pressure, he Brainstormed, then tried to re-examine the cards he had put back on top of his library. Patrick was having none of it though, and stopped him from looking.

Patrick cast Gaea's Blessing to shuffle his counters and impulse back into the deck before playing a Wasteland and passing the turn. Johan resolved a Seal of Cleansing on his next turn, meaning he could get rid of the Oath and make a bunch of Elephants on the next turn. But Patrick had a backup Oath, which resolved without a fight.

The game once again stalled out as the players played lands and drew cards, doing very little else. Johan had a major advantage though, being four lands ahead when it came to the counter war. Johan resolved a Fact or Fiction at the end of turn, revealing Seal, Swords, Impulse, Force of Will and Brainstorm.... five spells, proving that Tithe is important in this matchup. Johan took Impulse and Seal, and the Seal resolved uncontested.

At the end of Johan's turn Patrick tried for a Fact or Fiction of his own, and Brainstormed in response to Johan's Force of Will, but the Force of will Resolved, and all Patrick could do was shuffle up his deck with a Flood Plains.

Johan revealed two Wasteland, one Wrath, one Seal, one Counterspell.

Johan took the pile containing Seal and Counter before attempting to Swords the Spike Weaver. Instead Patrick Fogged three times, and the Weaver went to the graveyard.

In his turn Johan tried for his Morphling, Patrick Forced, and Johan Forced back. Patrick then tried for his own Morphling with the Counterspell backup he drew off the top of his deck. He Wasted Johan's only two untapped mana, Johan floated blue, and sacked his Flood Plains to go for a backup blue. Patrick was clearly looking to Swords the opposing Morphling by goading him into a counter war over his own.

Johan tried to counter Patrick's Morphling, but Patrick countered back, and used Swords to remove Johan's Morphling. However, this left Patrick cardless and when Johan untapped and cast Wrath of God, Patrick conceded to move onto game 2 with 20 minutes remaining in the round.

Both players kept their hands this game, which promised to be much more aggressive than the first. Again blue duals and Wastelands defined the first few turns, with the odd bit of Brainstorming and Impulsing going on.

Eventually Patrick tried for a Fact or Fiction in Johan's end step, but Johan had Pyroblast at the ready. He should have probably responded to him sacrificing the Flood Plains that fetched the Volcanic Island. 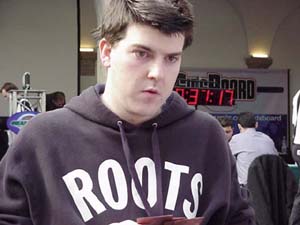 Johan used Blessing to shuffle back Pyro Impulse and Wasteland.

Patrick tried for a Call of the Herd in his turn, and it resolved. Johan did nothing in his turn, and Patrick was free to start beating with the Elephant. Johan tried to Fact or Fiction at end of turn, and this time it was Patrick's turn to have the Pyroblast.

Johan tried again for Fact or Fiction in his turn, to which Patrick responded with his own Fact or Fiction. Patrick played Force of Will, removing Disrupt from the game, and Johan had little choice to Force back removing a Counterspell on his side.

Patrick, frustrated by the consistently good Fact or Fictions commented "It's like I'm giving you ten cards or something."

Johan took Fore of Will, Call of the Herd and Tropical, so he could Trigger the Blessing. Unfortunately that meant that the Swords was also shuffled in.

Johan tried for his own Call on the next turn, and Patrick Force of Willed Johan, then Flashed back his Call of the Herd, and used it to Block Patrick's Treetop Village on the next attack. Johan of course then drew Wasteland off the top of his deck, making his decision look a little foolish.

Patrick tried for a second Call, but this time Johan hard cast his Force of Will. With Patrick having no cards in hand, Johan untapped and made a Morphling. Patrick made a Keg on his turn, but five counters seemed so far away with only twenty seconds on the clock, and nineteen life to play with.

As they entered extra turns Johan was at seven, and had a Morphling in play, while Patrick had two elephants. He flashed back a Call of the Herd, before attacking Johan down to four at the expense of an elephant token.

Needing to draw a third Call of the Herd and have it resolve, he used his Flood Plains in upkeep to thin his deck out, before drawing. It didn't work however as he drew a Wasteland and had nothing to do but pass the turn.

Johan 'Wrath of God'ed on his last turn, leaving Patrick creature-less and spell-less, so the last turn was irrelevant. Otherwise Patrick could've found a Spike creature and transferred a token onto his unblocked elephant for the win.