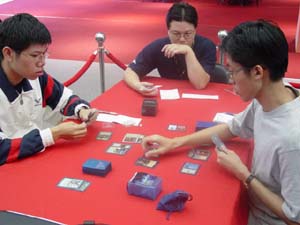 Albertus Law is part of a strong cadre of Singaporean players in attendance this weekend. All are playing the same deck, Psychatog with Red. Not just any red, though. In addition to Flametongue Kavu and Fire/Ice there is the ultimate technology of Burning Wish, tutoring from the board. A single copy of Obliterate has already caught a couple players off-guard.

This round he faces Ping Long Lee of Taiwan. Lee is running Quiet Speculation, but with a twist. Red mana gives him access to Flametongue, Fire/Ice and Jilt. He is also playing Sylvan Safekeeper to stop any shenanigans.

Law started with an Urborg Volcano and was quickly under the gun from Wild Mongrel. His Nightscape Familiar offered a long-term solution. Lee was also thinking ahead, making a Merfolk Looter. Law started pondering. He swung with his Familiar and Fired the Looter and Lee.

Lee untapped and played Living Wish. Law allowed it. It fetched Wonder, over Genesis and Flametongue Kavu. Unfortunately, Lee had no island to bring the jedi online. He was also short on action. Law was busy with two Familiars and a Looter on table. He stopped a treacherous kicked Jilt with Memory Lapse, and was firmly in business. 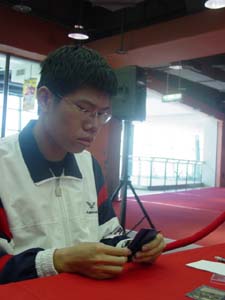 Next turn brought Fact or Fiction, and he scored Flametongue and land over two Looters and a land. The Flametongue took care of the Mongrel. Lee surprised no-one by bringing out the Jilt. He offed the Kavu and bounced a Familiar. Law meantime resolved another Fact or Fiction, topping up on lands. Lee made another Mongrel, but he was way behind.

Burning Wish got Law Chainer's Edict to clear a path for the Psychatog that soon followed. It would kill Lee in one stroke. He tapped four for Deep Analysis and had enough left over for Ice to stop the killing blow. Law beat him to it, Icing his blue at end of turn. Lee Fired the Familiars for spite and started setting up for Game 2.

Lee led with Sylvan Safekeeper and then Merfolk Looter. Law put him in a difficult Position with Fire. An island and the Safekeeper went to the graveyard. Chainer's Edict took care of the Looter. While Law played lands, Lee stopped making plays altogether. His hand was packed with Gainsays and Logics. He drew Roar of the Wurm but had no way of getting it in the graveyard besides waiting.

Law kept him off green mana with Ice, and when the Roar finally did hit the graveyard, he was ready with Cremate. Eventually, Law was able to play Psychatog with enough mana to pay for Circular Logic. Lee shrugged and played Gainsay. Law's hand was three Flametongues and Chainer's Edict. 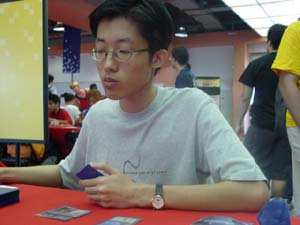 Lee made another Safekeeper. He had a Logic for the flashed-back Edict, but that tapped him out, and Law simply cast another. Next Lee tried Wild Mongrel. Law made a Flametonge, and stopped Jilt with Memory Lapse. Now he had Lee on a clock. Nightscape Familiar improved his situation. Jilt undid it. Lee tried Merfolk Looter. Logic stopped a Flametongue. Law went to his sideboard with Burning Wish, getting rid of Lee's graveyard, as well as his Looters, the outstanding Logic and Mongrels. It also revealed that Lee had no more Roar of the Wurms in his deck.

Unfortunately, the shuffle put Deep Analysis on top of his deck, and he cast it twice. Flametongue took out the Looter. Lee played another Analysis. He got busy with Looter and Rootwalla. He rescued the Looter from Flametongue's clutches with Repulse. All the while Law had a hand of land.

He finally found a Psychatog and played it, then a Familiar. Chainer's Edict took out a Rootwalla, leaving the Familiar vulnerable to fire. The echoes had done its work, however, leaving Lee's draws relatively harmless. Even Quiet Speculation could only get a single Deep Analysis. Law kept the pressure up, and soon emerged victor.