Round 11: Race to the Bottom

"Wow, last time I saw you was Top 8 of Nationals."

The battle here in Round 11 began with a little posturing as each player tried to position his deck as being the worst at the table.

"Let's see who can play the most embarrassing creatures!"

Shaheen won the roll and chose to draw, starting with Steel Overseer, and following up with Brittle Effigy, looking on as Jacob missed a land drop, and only hit his third land (and first Mountain) on turn four. 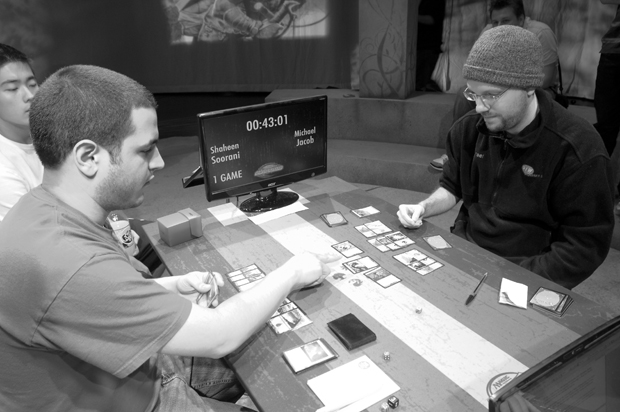 Americans Shaheen Soorani and Michael Jacob aren't happy with their draft decks, but only one of them can be the worst.

Steel Overseer died to a Lightning Bolt, but Shaheen had a second plan. Serra Ascendant came out and swiftly gained the power of Armored Ascension.

Only one thing got killed in the rest of the game, and he shares his initials with the king of pop.

Game 2 saw Shaheen leading with Brittle Effigy and following up with Ajani's Pridemate. He had a Roc Egg by turn three, but could not get up to enough mana to use his Brittle Effigy before Manic Vandal could destroy it.

Shaheen triumphantly cast Crystal Ball, drawing a wry "It was a just a bait? I see now." from Jacob.

MJ cast a Nether Horror, while Soorani had another Ajani's Pridemate. Soorani blocked the Horror at the first opportunity with Roc Egg, but Jacob had Lightning Bolt for the bird token that hatched out.

Tireless Missionaries meant that both copies of Ajani's Pridemate grew to 3/3. Jacob used a Bloodthrone Vampire and Manic Vandal to trade with one of them. It soon became clear why, as he cast Gravedigger to get back his Vandal and off Crystal Ball. 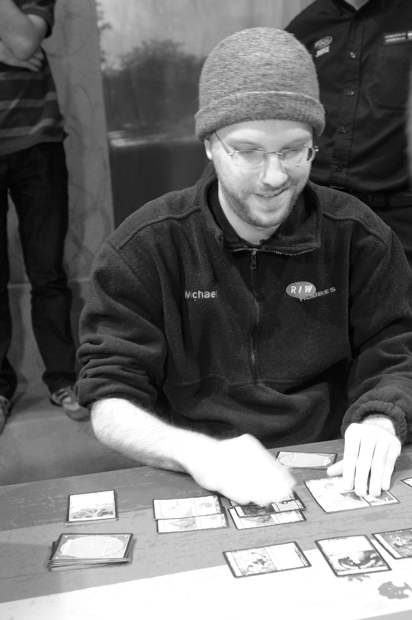 The true King of Pop.

Shaheen had a Wall of Frost to blunt MJ's attacks, and merrily went into the red zone with his team. He had a Safe Passage to power down Jacob's double blocks, and it wasn't until Assassinate came to play that Jacob was able to finally deal with Ajani's Pridemate.

A Siege Mastodon from Shaheen was quickly offed by Deathmark, and while it seemed that Jacob had achieved nominal control with Soorani living off the top of his deck, he was at just 4 life.

Jacob cast a pair of Lightning Bolts to clear out Soorani's team. All he had left to do was beat down. Shaheen was on 11, and with Nightwing Shade, he presented a one-turn clock.

Shaheen sat with cards in hand, hoping to scare MJ off going in for the kill. Jacob sensed blood in the water though, and killed off Soorani.

"Wow, you haven't even seen all my rares yet!"

"You have seen no rares from me, and I've seen Serra Ascendant and Steel Overseer ...."

Shaheen did a quick count and got up to six.

"I would trade half of these rares for one Stormfront Pegasus though."

Soorani led with a turn-one Serra Ascendant, and let out a low curse when he saw Prodigal Pyromancer from Jacob.

When Crystal Ball was offed by Jacob, the crowd felt Soorani's pain.

"I don't want to play anymore," he said as he cast Brittle Effigy. 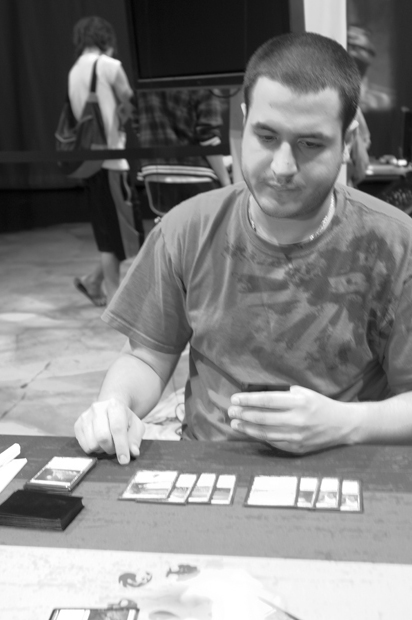 Soorani worked his way through playing creatures and having them hit by Lightning Bolt until finally he landed an Angelic Arbiter. The angel got one hit in before Assassinate sent it to the grumper, and from there Jacob had a clear path to victory. He started swinging, and had an Act of Treason for Soorani's last blocker to finish things.

Soorani looked to the top of his deck. There was the Stormtide Leviathan that might have put him back in things. Sword of Vengeance was just a little further down, but he never had the time to draw either.