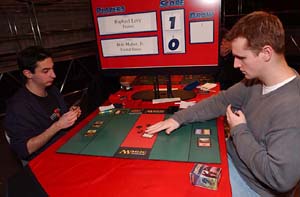 France's Raphael Levy was all smiles as he sat down to do battle with Bob Maher, Jr., though his forty-seventh place standing gave him little reason to be sunny. By contrast, Maher was near the top of things and came to the table looking grim. Maher's deck was a medium-range red-white special that boasted two Liquid Fires, Shower of Coals, and an Anarchist. Levy was with black-green fatties and removal.

Levy had to paris, and started off with Zombie Infestation. Not great. Lucky for him Maher's three land failed to be joined by a fourth. He pitched Acceptable Losses and Liquid Fire while Levy got in the game with Krosan Archer.

Maher Emboldened early rather than risk another discard. Levy pitched Rabid Elephant and Crypt Creeper to make a token, recovering the Elephant with Gravedigger. Patrol Hound showed up just in time for Maher, but after he blocked the 'Digger in an all-out attack and pitched, Levy cast Afflict. 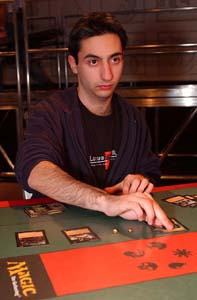 Finally Maher got his fourth land and cast Mystic Zealot. Levy pitched two for a token, getting enough cards in the graveyard to Demise it. Seton's Desire was just icing on cake. His army marched to victory.

Maher's start was quite the opposite in Game 2. Patrol Hound, Mystic Visionary and Firebolt to clear the way. Levy Afflicted to spare himself some pain, but Pardic Firecat kept the hits coming.

Levy had no fourth land, and so stripped Maher's hand of Cease-Fire and Acceptable Losses with Last Rites, pitching Zombie Infestation and Gravedigger. He had to trade a Dusk Imp for a Patrol Hound pitch. Then Levy pulled a fourth land and passed it back without acting. "Hmmm," said Maher, "somebody has an Elephant Ambush." He drew his card and swung with both men. Levy made his tokens and agonized over which to take down.

When the decision took more than a minute, Maher pushed his one-card hand forward, saying "It doesn't matter, this card will kill you this turn." He flipped over Shower of Coals. Levy agreed with that assessment, and they were on to Game 3. 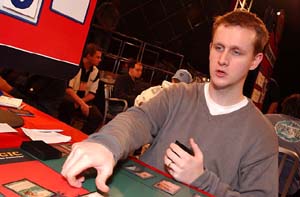 Levy chose to draw, while Maher wondered aloud "Still kept the Infestation in after boarding, eh?" Maher kicked off with Mystic Enforcer, quickly outdone by Wild Mongrel. When the dog got Seton's Desire, it looked downright unstoppable.

Maher took four. His next play was a boarded-in Earth Rift, a countermeasure for Levy's Caustic Tar. He blunted the next Mongrel hit with Embolden. Krosan Archer kept him under fire. He untapped, and with his six land cast Liquid Fire. That put Levy in a dilemma. He pitched two to make the save, and so took five to the face.

He hit back for six, putting Maher at six. Gravedigger got back something barely relevant. Anarchist from Maher got back Liquid Fire, but he needed a miracle draw to escape. Levy swarmed him, and the Anarchist jumped in the path of the Mongrel. Levy pitched two cards to make sure Maher couldn't save with Embolden. Of course, he didn't want to. He needed to save himself the damage and hope for Firebolt to go with his Liquid Fire. It didn't come. Next turn Levy smashed.

2 Innocent Blood 1 Chatter of the Squirrel