Round 11: Rare Drafting with the Gab

Around this time last year in Paris, Gabriel Nassif and Makihito Mihara squared off in the Top 8 of the World Championships in Paris. Back then, it was Snow White vs. Dragonstorm, and Mihara won out when Nassif tapped down low enough that Dragonstorm could go off in spite of Nassif's defences. This time around, each of them is at 8-2, playing to get to top eight once more, in Lorwyn draft, prior to the Legacy rounds. 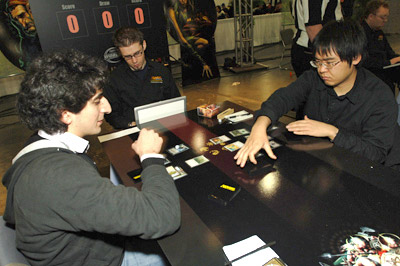 Nassif was looking for revenge from last year's Worlds.

Mihara led out with Spiderwig Boggart, off a Forest, Plains and Swamp.

"Almost Doran," joked Nassif, who played Jace Beleren, and immediately used the planeswalker to let each player draw a card.

Mihara attacked Jace back down to 3 loyalty counters and added Avian Changeling to the team—creating a force that seemed likely to take him down quickly. Nassif again let each player draw a card, and played Veteran of the Depths, who did not enter play large enough to be an exciting blocker, but had the potential to get there.

A Kithkin Harbinger from Mihara added to his swelling attack force, and set up his draws, with a Nameless Inversion on top. This Nameless Inversion helped him win a clash on his attacks, and Fistful of Force ensured that in spite of the Frenchman's blocks, Jace was going down along with the Veteran.

Gab had a strong reply to Mihara's strong turn, in Silvergill Adept and Silvergill Douser. He followed up with Aquitect's Will to draw a card and passed. Between blocks and removal, Mihara looked in good shape to keep Nassif's board clear, but each and every time, Gabriel had more merfolk, with the second wave being Fallowsage and Judge of Currents.

The tempo of the game was with Mihara when a second Nameless Inversion took down Fallowsage, and attacks knocked Nassif to 14. Harpoon Sniper made attacking back look unattractive. However, Gabriel had an upgrade for his Judge of Currents with Changeling Hero, who was soon followed by Wellgabber Apothecary. One swing from the Changeling took the life totals to 16-18 in the Frenchman's favour, and Mihara let out a sigh before dropping Doran, the Siege Tower. Nassif liked the look of a legendary tribal monster, and showed off his own—Sygg, River Guide. 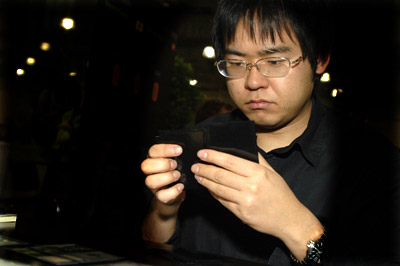 The defending World Champ had no answers to multiple Planeswalkers.As good as Doran is, Sygg looked a lot better with Nassif's board of Wellgabber Apothecary, Changeling Hero, Deeptread Merrow and Avian Changeling. When Ajani Goldmane joined the team, things got thoroughly out of hand.

It was only a couple of attacks later that Mihara scooped it up.

Mihara again had the more powerful-looking start, with Kithkin Greatheart followed by Avian Changeling to power up his 2 drop. Nassif went for Deeptread Merrow and Drowner of Secrets, but was in an awkward race as Mihara's team was joined by Squeaking Pie Sneak, with the reveal of Nameless Inversion. Crib Swap hit the Greatheart, but by this point Nassif was at eight, and even the Changeling Hero he played looked uncertain to be enough. It couldn't block any of Mihara's team, and after using Ponder, Nassif scooped them up in a quick second game.

Gabriel started off the third game with a Ponder, and followed it up swiftly with Silvergill Douser. The Douser came online just in time to hold of a Kinsbaile Skirmisher from Mihara, and was joined by first Silvergill Adept, then Streambed Aquitects on subsequent turns. Meanwhile, Mihara's draw seemed unspectacular, with Spiderwig Boggart and Kinsbaile Balloonist not posing a huge threat to Nassif's board.

The Frenchman played Drowner of Secrets, and sat back, happy to take things slowly. He stopped 2 points of flying damage from Kinsbaile Balloonist, and at the end of turn, milled Mihara for 3 with his Drowner, hitting amongst other things a Nameless Inversion. Sygg, River Guide joined in the fun, but still Nassif wasn't worried about attacking so much as milling his opponent. Dreamspoiler Witches and Cloudgoat Ranger came out from Mihara, and suddenly things looked a little tougher for Nassif. He again milled Mihara, this time getting the potentially crippling Final Revels out of the way, before casting Summon the School the following turn.

Attacks took Nassif to 8, and at the end of turn he chose to mill Mihara for 6 rather than fetching back Summon the School. Aquitect's Will drew Nassif a card, and he counted 13 cards left in Mihara's deck. Another Merfolk came out from him, and Mihara started calculating if he could kill his opponent before losing to decking.

Nassif's an old hat when it comes to playing under the spotlights. At the end of Nassif's turn, Mihara cast Nameless Inversion targeting Sygg, using Dreamspoiler Witches' triggered ability targeting Silvergill Douser. This put Nassif to a decision. He used Sygg's ability to protect itself, and then thought long and hard before using Streambed Aquitects to save the Douser.

On Mihara's turn, he simply attacked with his team. Nassif was on eight, and had a lot of blocks to consider, as well as the issue of nine points of flying power to deal with. Nassif blocked and milled with those creatures that would ultimately die, going to just 4 life, Mihara though, was down to 6 cards. When on his turn Nassif had the sixth merfolk, he was able to mill for exactly enough.

After the match Nassif laid out his rares, including Ajani, Jace and Garruk Wildspeaker, all of whom he'd picked up in the second pack, and none of which was a first pick!