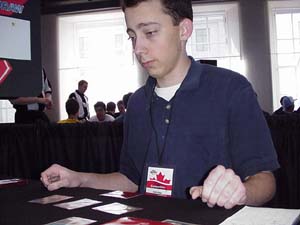 Josh Rider will tell you straight up he's no good when he's distracted. He was in a position to draw into the Top 8, but was paired down. With so much on the line, it's a good thing he's playing against Sam Lau, the picture of a meticulous, no-nonsense player. Lau's no stranger to Nationals Greatness. He made the team in 2000, and the Top 8 last year. Now he's a win and a draw away from another shot. Lau is playing Psychatog, which is nothing unusual for him. Rider is playing the black-green Oversold Cemetery deck that had a brief moment of hype.

Rider led with Birds of Paradise and then a Cabal Therapy for Counterspell on the second turn. He saw instead Upheaval, Smother, Force Spike, Concentrate, Polluted Delta and two Circular Logics. He immediately flashed it back, sacrificing his Birds to snag the two Logics. He made a Llanowar Elf and was done.

Lau played Polluted Delta and Smothered the Llanowar Elf. Rider replaced it with a Birds of Paradise. Lau played his third land and had nothing to do. Rider Living Wished for Genesis. Still Lau was inactive, missing his fourth land drop. Rider made a Wirewood Herald to pick up the "beats". Finally Lau hit his fourth land and Concentrated.

Rider hit for one and brought out Oversold Cemetery, only to see Lau Concentrate again. He mentally crossed his fingers and watched as Lau dropped two spells into his graveyard, still missing his fifth land. Rider drew another Therapy, and fired at Counterspell. He hit once, and saw two Force Spikes, Smother, Edict, Upheaval, and Psychatog. He flashed it back right away, serving up a Caller of the Claw thanks to the Herald. Lau tried a Spike, and Rider paid. He stripped Lau of his 'Tog. It was only then that he realized he hadn't attacked yet. He did his best not to look embarrassed.

Lau took the beats, drawing a land and then Psychatog. Rider was ready with Smother. Lau drew land number six and passed it back. Rider hit for four and was done. Lau Smothered his birds at end of turn, then played the Big Ups. Rider floated three and let it resolve, then played Caller of the Claw after Lau had put his island into play. Lau did not Spike.

Rider played a forest and hit Lau down to five. Lau played a second island. Rider played a swamp and dropped him to three. Lau cycled Lonely Sandbar into Psychatog and put it into play. Rider topdecked Smother, and straightened an imaginary tie before waxing the 'Tog.

"A possibility. You didn't see the crowd react?" – Josh Rider

Lau drew his next card, and scooped. 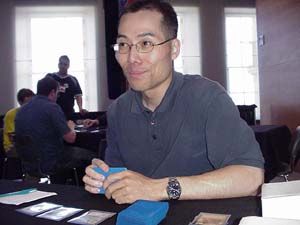 Lau was in a much better position going first for Game 2. He Spiked a Llanowar Elves then Counterspelled Rider's attempt at a Wirewood Herald. A second Herald resolved, and then both players stared at each other for two turns, playing out lands. Lau broke the silence with Psychatog with two blue open. Rider Smothered it at end of turn, and Lau let it happen. Rider hit for one and was done.

Lau dropped Zombie Infestation, and chided Rider when he reached over to read it. Rider untapped and tried Braids. Lau funneled a Circular Logic and Underground River through his Infestation, countering the spell and making a zombie. He untapped and dropped Engineered Plague to off the Herald while Rider couldn't play the Caller of the Claw he'd get. Rider topdecked another Braids and it resolved. Lau sacrificed a land and tried to swing, only to see his token Smothered. Rider started swinging, and the two kept up playing lands and sacrificing them.

Finally Lau turned the tide, playing his land for the turn and playing Persuasion on Braids. Now he was the one dealing damage, while the two played draw-go. Two turns later, Lau was behind on lands, and he let the Braids go. Rider brought out the Caller with a friend and started hitting for three. Lau seemed powerless.

Instead he ripped City of Brass to enable his Ray of Revelation. Of course, he did this after combat, costing himself a point.

"I'm really on top of my game today!" – Josh Rider

Lau drew, and congratulated his opponent on making Top 8.