Round 11: Shawn Regnier vs. Gab Tsang

It’s a clash of the Old School Titans! The original Juggernaut, Gab Tsang, has been tearing up limited tournaments since way back, and now makes his home on Magic Online while showing up at occasional tournaments to post strong finishes. Shawn Regnier is less habitual about his top-level competition, having all but retired ages ago. Still, he likes to come back and shoot spells with the best of them, and never fails to draw a crowd of spectators when he does. 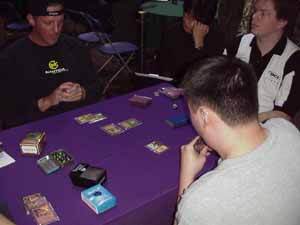 Tsang came out, guns blazing with a Goblin Sledder. Regnier matched with Birchlore Rangers. Already, it was obvious that draft is a much, much faster format than Sealed Deck. Regnier continued his mana curve when Tsang missed his, tapping out on his second turn for a Wirewood Harvester. Tsang made a creature with everybody’s favourite turn three play, which Regnier’s Elvish Warrior simply laughed at. The Insect that the Harvester made was just gravy.

Embalmed Brawler came out for Tsang, showing Gempalm Polluter. Regnier used his Birchlore Rangers to accelerate up to a fourth turn Spitting Gourna, ending the Brawler’s reign too. Embermage Goblin from Tsang promised to make things interesting, but Regnier’s grip was good- Screeching Buzzard, Infest and a Patron of the Wild. Tsang just held the Polluter and a Swat. Going for the Infest kill, Regnier served with the Warrior, the Gourna and his Insect. Tsang blocked the Warrior with the Brawler, and blocked the Insect with his morph. That played right into Regnier’s plans, and he Infested the board away, sans-Gourna. The combat damage on Tsang’s creatures meant that the Goblin Sledder could only save one creature, his morph. Morph from Regnier began the rebuilding process.

The morph (Patron of the Wild) was Swatted away, but Screeching Buzzard hit the table. Gluttonous Zombie brightened things up for Tsang, who then played a Forgotten Cave as his sixth land, bringing out criticisms from Regnier.

“You played that as a sixth? I would’ve saved that for cycling.” – Shawn Regnier
“Oh, really?” – Gab Tsang 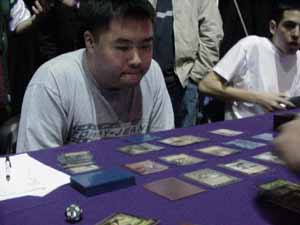 The sixth land allowed Tsang to play his Polluter, while the Buzzard served through the air. The ground was locked- a replacement Elvish Warrior and Gourna for Regnier; a Gempalm Polluter, morph and Gluttonous Zombie for Tsang. A second morph joined the first on Tsang’s side. Buzzard and Gluttonous Zombie traded blows. Then Tsang tapped seven. Kilnmouth Dragon hit the table.

Regnier made two morphs, but his options were dwindling at the end of an opposing dragon. He only hoped that his hidden Patron of the Wild would enable the Screeching Buzzard to take down the dragon. With one card in Tsang’s hand, Regnier went for it. The dragon attacked. The Buzzard blocked. Patron of the Wild was turned face up, and Tsang turned over Pinpoint Avalanche. Tsang’s next draw wasn’t too bad either. The Dragon hit for eight, then he revealed Searing Flesh.

Once again, Birchlore Rangers came out, but this time, no Sledder was to be seen. Wirewood Herald joined in, but nothing came out on turn three. 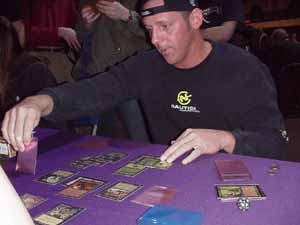 Unlike Regnier, Tsang did have a morph, which, when twice as large as one of Regnier’s creatures, forced him to now consider alternate routes. Regnier played a Plains, bringing out “Hmmm…” from Tsang, but it was only used to bring out a Screeching Buzzard. Embermage Goblin came out to try and pick off Regnier’s army, but Regnier tapped six and played Brontotherium on turn five (Rangers). It was a question of “Avalanche or no?”, and Tsang’s expression evidently said “No.”

The morph went in to try and coax the Brontotherium into blocking, but Regnier didn’t bite. One might’ve thought that a little bit odd, since the Goblin in combination with the morph could take down the Brontotherium, so something was definitely afoot. The army served. Tsang flipped over Skinthinner. Symbiotic Elf came into make up for the lost beast, but the Embermage Goblin made it seem like just a minor nuisance. Secret Agent #2 joined Tsang’s cause, and, lacking options, Regnier served. He lost his Herald and Symbiotic Elf, picking off a Skinthinner for his efforts. The Herald gave Regnier an Elvish Warrior, but that would only hold the ground for so long before the Kilnmouth Dragon would return.

In an attempt to steal the show back for himself, Regnier brought out Brontotherium #2. Tsang attacked with his morph, and Regnier bit. He didn’t block, and lived to regret it. Tsang revealed Cabal Executioner, and Regnier was forced to sacrifice his Brontotherium. Too far behind, Regnier conceded the game and match.