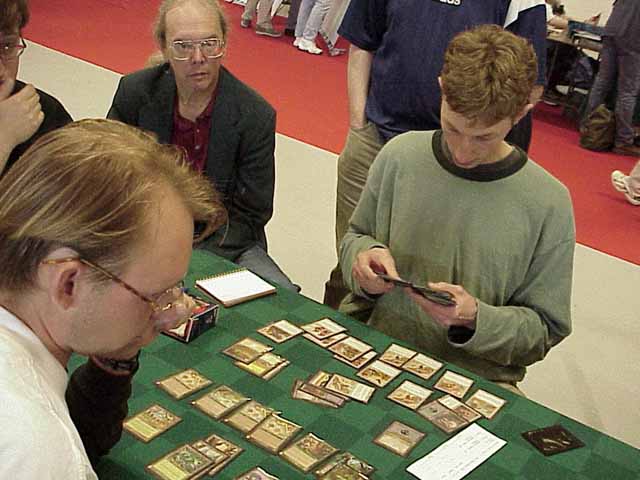 The winner of this match is likely to make top 8, so both players are trying their hardest. Nyegaard is playing a Tangled Stompy deck with Wild Mights. Shinkins deck is very interesting. It is a white weenie rebel strategy - with Swamps. Being able to sideboard in black cards takes care of many of the deck's problems - especially its notorious weakness against Angry Hermit or Trinity.

Shinkins took a few points of damage from Nyegaard's creatures early, but was quickly able to shut down the offense with Mother of Runes and a couple of 2/2 rebels.

Things went downhill for Timme from that point on. He was able to do nothing other than lay a few creatures. Shinkins cast a Defiant Falcon and started summoning rebels directly out of his deck. He was reluctant to attack with his ground creatures, weary of any tricks Timme might have up his sleeve. Instead, he was sending in a Thermal Glider for two points of damage every turn. 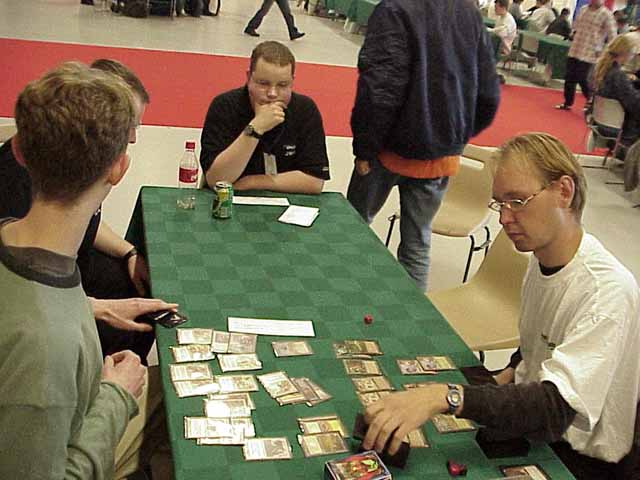 Stewart was playing a bit slowly, and searching through his deck with Rebels several times per turn did not help matters. Eventually Nyegaard, who was not going to be winning this game, conceded in order to have some time to play the rest of the match.

In the second game Shinkins kept a City of Brass and a Swamp draw as his only lands. His hand was good otherwise, including a Ramosian Sergeant, Perish and Vampiric Tutor.

Unfortunately for Shinkins, he was forced to Tutor for a third land and cast Perish to remove a double-Rancored creature. This only delayed his ultimate fate, as Shinkins was unable to deal with the next onslaught of green creatures Nyegaard held in hand, in anticipation of Perish. 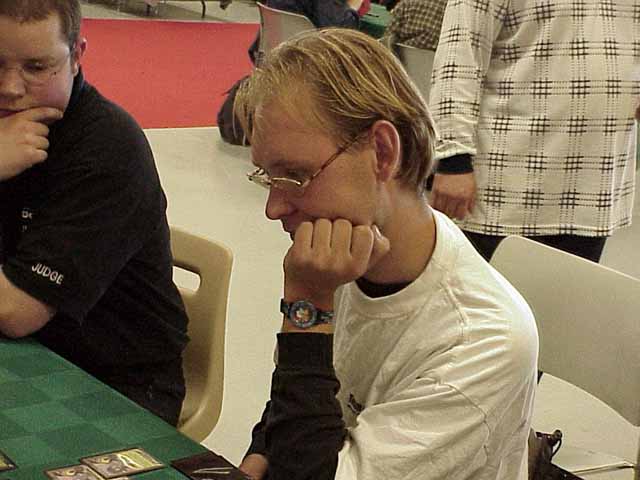 In the final game, Rebels were able to hold off the green creatures very easily, thanks to a Crusade. Shinkins played a pair of Parallax Waves, removing the River Boas that could block and regenerate, and won in several attack steps.