Round 11: Taking it to the Red Zone

Siron has burst onto the scene recently with a Top 8 at Pro Tour-Columbus and an appearance in the team finals at the World Championships as a member of the Belgian National Team. He's currently 9-1 and would be on top of the standings if it weren't for the undefeated status of his opponent, Arnost Zidek. Zidek is a relative newcomer who put in a lot of preparation for this event on Magic Online. Before the match, his wife leaned over from the railing and gave him a kiss for good luck.

There was some discussion of her coming down into the feature match area, which prompted the following conversation: 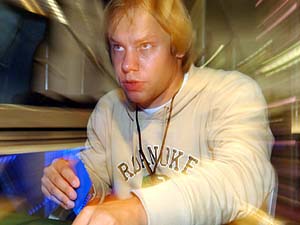 "Is she your friend?"

"No. Actually she takes photos for a Czech Magic site."

"Does she know cards?"

"No…do you have a problem with her watching?"

In the end she decided to stay in the stands and cheer from there anyway.

After a couple more words and a mulligan from Siron, they started the match.

So, I'm going to be trying a little experiment here. We're going to be watching this match from the perspective of the red zone. I have no idea if it'll be interesting or not, but I figure it's worth a try.

The missing details are a Honden of Night's Reach that emptied Zidek's hand early and kept it that way throughout the game, effectively nullifying the Secretkeeper. That is, until Zidek topdecked and played a Moonbow illusionist, which forced Siron to make the final alpha strike. He seemed frustrated with Zidek's choice of blocks, asking, "Why would you block like this?" 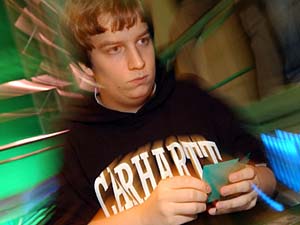 Siron was in a hole after Game 1.

Zidek paused and shrugged, "Because I win this way." After the attack he was left with Waxmane Baku, Moonwing Moth, and Moonbow Illusionist, which was enough to kill Siron, but only if he didn't have any blockers in his hand.

Pointing at Secretkeeper, Siron responded, "You could win with that guy."

Zidek may still have been rattled from the end of last game, because he made a couple of mistakes this game. He forgot a counter on his Waxmane Baku early, and then later neglected to use a counter before returning it to his hand for the Ninjutsu of Ninja of the Deep Hours. He could have forced through an extra three damage, although I doubt it would have ended up mattering. Kagemaro plus Death Denied gave Siron far more card advantage than he could handle. He conceded shortly thereafter.

Zidek had a turn-two Eye of Nowhere on Siron's land, but Siron threatened to come back with a turn-three Kiku, Night's Flower. When he also had Kagemaro, it went downhill quickly for the Czech player, although he managed to make it close. The final nail in the coffin was a Death Denied, recovering both Kagemaro and Kiku from Siron's graveyard. The second Kagemaro activation cleared the board again and Zidek couldn't stop the large green men that Siron had waiting in the wings.