Round 11: Tobey Tamber vs. Tadayoshi Komiya 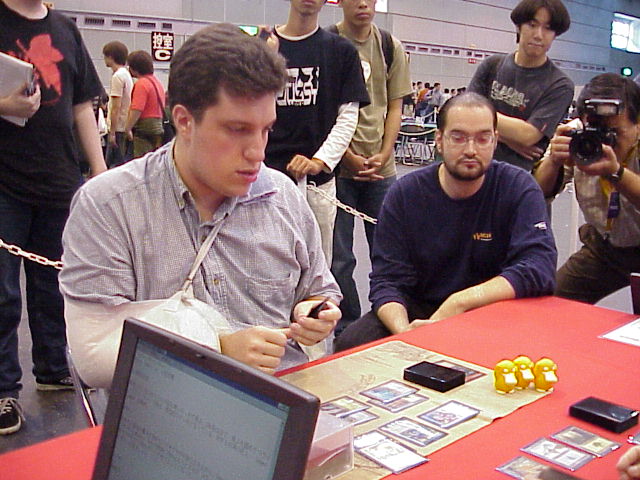 APAC regular Tobey Tamber is 2-0 in this first draft despite wearing his arm in a sling. Now he meets his greatest challenge since the motorcycle: Tadayoshi Komiya. Komiya has two constructed Grand Prix titles to his name, and is a former National Champion.

Komiya won the die roll and chose to go first. He was soon facing a Wild Mongrel from Tamber. He took two, then Vivified an Island to block. Tamber pitched Zoologist and Acceptable losses to take it down. He then put Thought Eater in play. Komiya stopped the bleeding with Springing Tiger.

Tamber continued to keep control of the game, playing out Dreamwinder. Kirtar's Desire kept it from wandering too far. Tamber continued the beats, sending Mongrel and Eater. Komiya blocked with his Tiger, and after Tamber pitched cards tried Repel. Tamber Syncopated.

Aven Fisher came out, and Tamber swung again. This time he couldn't stop Aether Burst. He replayed the Mongrel and added Squirrel Nest, emptying his hand. The game stalled, but that suited Tamber's Nest just fine. Tamber was kept from abusing his Cephalid Broker by a Repel from Komiya that physically flipped the Broker to the top of Tamber's library. It was clear that Komiya had no love of Tamber. 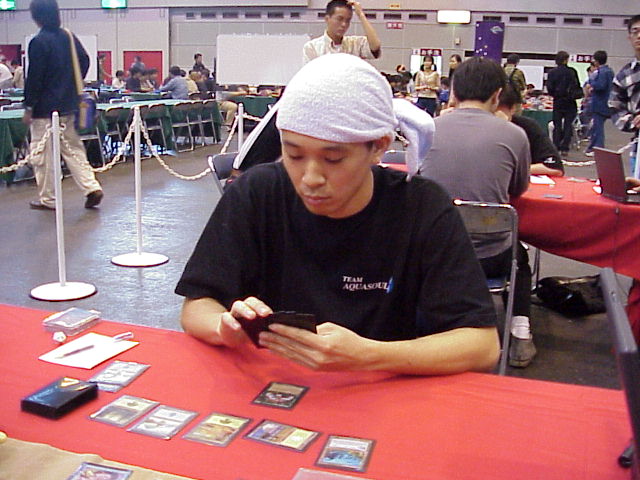 Eventaully Tamber found Nantuko Disciple and started attacking in the air with Thought Eater. Komiya found Second Thoughts before things got out of hand, but Tamber had Leaf Dancer in reserve, and his army of squirrels was now six strong. Rather than prolong the inevitable, Komiya conceded.

Tamber got things going in game two with Cephalid Scout. Komiya got a little insider information with Peek, and started working for the long game with Cephalid Looter. Tamber brought out Leaf Dancer, and after swinging into Komiya's Looter, saw Repel foil his Refresh.

Komiya hid behind a Springing Tiger off a Timberland Ruins, safe from the soon doubled-up Leaf Dancers. He baited Tamber with forest and Cephalid Scout, and Tamber walked into the on-board trick, losing a Dancer. Komiya continued to dominate with Fervent Denial on Cephalid Broker. 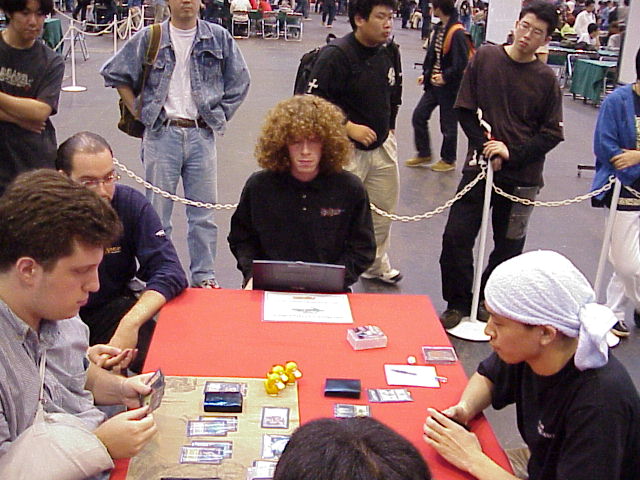 Soon after he hit threshold, and then his Tiger started swinging. Tamber searched for answers with Cephalid Scout, but couldn't find more offence than two Wild Mongrels. Komiya sat back on his Denial and swung for victory, stopping a Repel on the fatal attack.

In game three, Tamber tried to take control with a turn-three Squirrel Nest, but Komiya had the Syncopate. Tobey followed up with Wild Mongrel, but you could tell it wasn't the same. A Peek from Komiya revealed that Tamber held just land and Seton's Desire. Not strong. Tamber made a go of it, hitting for four past Komiya's Springing Tiger, but Komiya had Aether Burst.

While he beat down, Tamber worked to rebuild with Dreamwinder in addition to his dog. Komiya had a second Burst. Tamber was at eleven before he knew what hit him. In two turns he had taken lethal damage.

Afterward, Tamber lamented not waiting for his Nest, as it was a key card in the matchup, and he'd have plenty of time to play it safely.