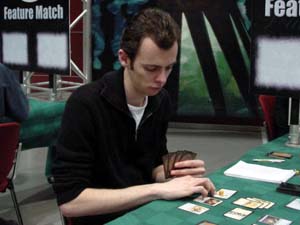 Dutch rampage at Grand Prix Bochum continues. Yesterday these two teams slugged it out in the last round to see who would go into day two as tournament leaders. Schietkoe were victorious that time and now it was time for a rematch. The winner would book a place in the top 4, the loser would have a second chance in the next round.

Walking over and looking at the decks during construction my first thought was "That's a typical Bram deck".

Mindslaver, Mind's Eye and Tower of Champions all sat in the to-play pile.

With such lunacy going on I felt the match to cover was again between Snepvangers and Tom van de Logt.

Van de Logt had a much more sensible RW deck although he did have a Luminous Angel.

Snepvangers' early attempt at mana acceleration, a Vedalkan Engineer, fell to a Pyrite Spellbomb. Snepvangers returned the favour by shooting a Pteron Ghost with a Granit Shard. Van de Logt immediately avenged it with an Echoing Ruin. Van de Logt summoned a Krark-Clan Grunt, but didn't have a lot to do as Snepvangers busted out an Arcbound Bruiser and then a Mindslaver.

Van de Logt had a useful rare of his own, a Luminous Angel, but Snepvangers sent it back to his hand with an Aether Spellbomb The Mindslaver was popped but Snepvangers couldn't really abuse it fully. The best he could do was force the Grunt to attack so he could block with a Myr Retriever and fetch a Granite Shard back and waste the Stir the Pride in van de Logt's hand.

After the fun Van de Logt finally got a go and brought the Angel back. The hapless creature didn't stay around long as Essence Drain combined with the Shard sent it to the graveyard. On the following turn a Looming Hoverguard appeared and van de Logt's fate was sealed.

In the other matches both of the Cornelissen brothers were 1-0 up.

Back to this matchup and van de Logt had started to whittle away at Snepvangers with a pair of fliers, an Arcbound Stinger and an Emissary of Hope, while a Yotian Soldier held off Snepvanger's Arcbound Bruiser on the ground.

A Neurok Prodigy popped up and a Razor Barrier from van de Logt and a discarded Dross Scorpion ensured both the Prodigy and Emissary survived their mid air collision.

Snepvangers dropped a Mindslaver onto the able and then popped it. Again it couldn't really do a great deal of damage as van de Logt, currently missing mountains, had only creatures in hand. Even a not so good Mindslaver is still useful as van de Logt's Emissary and Yotian Soldier went on suicide missions.

The lunacy hadn't ended there as Snepvangers summoned a Goblin Replica and dropped a Tower of Champions.

As I said earlier, a typical Bram deck.

Over on the other table Stijn Cornelissen won his match 2-0 to give Schietkoe a 1-0 lead. 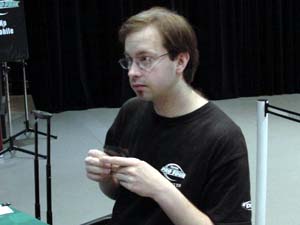 Van de Logt summoned a Loxodon Mystic and when Snepvangers killed it with an Essence Drain he packed up deciding enough insanity was enough.

This left only the Jesse Cornelissen - Didier Deurloo match, which Jesse won shortly afterwards 2-0. All of Snepvangers' crazy deck-building antics were for naught as the rest of his team fell to the combined might of the Cornelissen clan.

Schietkoe beat Toernooicentrum.nl/faal 2-1 and guarantee themselves a place in the top 4.