Round 11: Tom Guevin vs. Jason Opalka 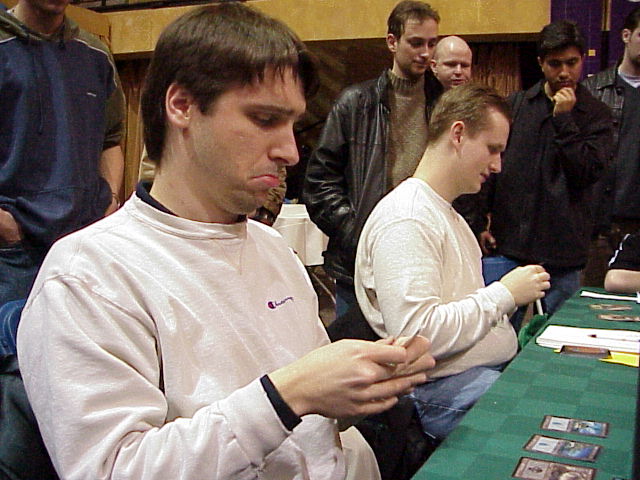 Tom Guevin and Jason Opalka are two of the funniest, most colorful characters on Tour. Guevin began their feature match by throwing a paper towel at him. "I'm not gonna stand for your tomfoolery, Tom." "I was just throwing the Kleenex into the trash." The crowd "oohed" and even Opalka admitted "that was savage beats." Everyone laughed and then Guevin flipped over backwards in his chair while rolling a die to see who goes first. The tone for the match was set and the crowd just kept growing for one of the "gassiest" matches of the day.

Guevin dropped Faerie Squadron without the kicker on turn 2 of game 1 so he could trade it for Rogue Kavu. Recover on the Squadron plus Shoreline Raider versus Opalka's Kavu Aggressor and Caldera Kavu left Tight Tommy in good position. Opalka's blue/black/red deck kept spitting out monsters and Recoil allowed him to do some attacking. Guevin took a little damage while he played out fliers to establish a clock and then Vodalian Serpent followed by the Shoreline Raider gummed up the ground. The key play came when Opalka played Backlash on Vodalian Serpent, dealing 6 straight to Tommy's dome and clearing a path for his own attackers. Tom was forced to lose Faerie Squadron and Phyrexian Bloodstock in the ensuing attack while accomplishing nothing but returning Cavern Harpy to Opalka's hand (and stopping 6 damage). Opalka's Slingshot Goblin made it really hard for Guevin to recover. Tommy did his best, attacking aggressively with the 6/6 Serpent while feeding small blue creatures to the Slingshot Goblin. He got Opalka down to 4 with only one blocker available to chump the Serpent, but he couldn't topdeck the removal or bounce he needed to win. Game 1 went to Opalka. 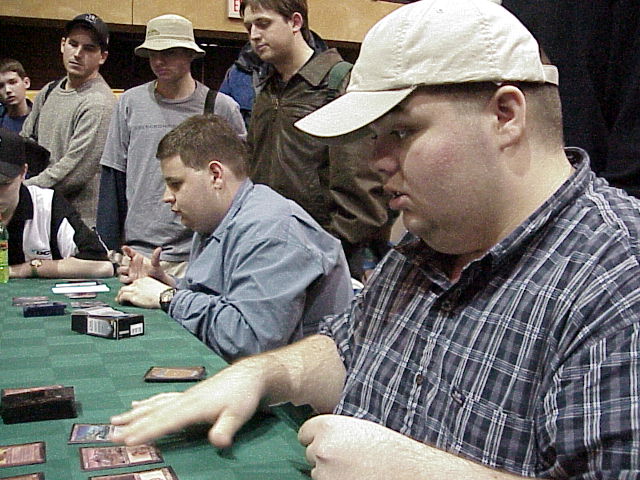 Guevin forced Opalka to go first in game 2 - a popular strategy in sealed, but an unusual one in draft. Opalka played his ultra-annoying Slingshot Goblin on turn 3 and Guevin Repulsed it, looking for his first Swamp. He didn't find it. He was then forced to either play small blue creatures or discard - not pretty. Once Guevin finally did draw a Swamp, Opalka destroyed it and his lone blocker with Plague Spores. With just 4 points of life to work with, Guevin drew a pair of Swamps and dropped his bomb - Yawgmoth's Agenda. Guevin played out Repulse and then Vodalian Serpent with kicker. He seemed to be stabilizing but Opalka broke through the wall of fish by playing Cursed Flesh on his own Caldera Kavu and serving for the last points of damage.