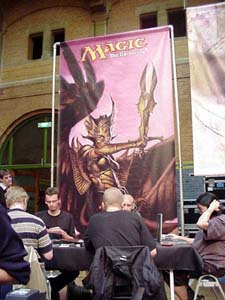 During the lunch break just before this round the two players had already played some games against each other, so it was a little anti-climatic that they would have to play each other for real this time. Tom played a blue-green madness deck with some late game through cards like Bearscape and Upheaval. This deck was originally built by a group of players for the Dutch Nationals, but it didn't really shine there because of a less than stellar match-up against decks like Psychatog and Kibler's red-blue-green. Frank played red-green like most of the Dutch players here. His only tech is two main deck Meteor Storm, otherwise it's a pretty standard version. Everybody knows Tom for his consistent finishes at Worlds and various other high level tournaments. Frank Karsten is a little less known even though he came ninth at Euros in 2000 and made several Grand Prix Top 8s.

Frank won the toss by letting Tom choose between two of his sideboard cards. Tom couldn't pick the Anurid Scavenger so Frank got to play first. These pros know how things get done at this level and they displayed it very professionally by counting out seven cards, looking at them and then declaring they wouldn't keep... because they had mixed-up their decks. Tom also noted that the top card of Frank's deck were marked and pretty soon a judge came to sort things out. About five minutes later after they both mulliganned the match could finally start.

Frank started really weak with a double Mountain, Lavamancer opening, then told Tom: "I hope you are sitting there with four Standstills."

After failing to draw a land for two turns he could only watch as Tom played an end of turn Fact or Fiction to improve his hand size and quality. Tom flashed me his hand afterwards and stated, after playing a Wild Mongrel, that he was in good shape to win.

Frank would have none of that and ripped the Forest he needed from the top of his deck so he could match Mongrels, but Tom had the Circular Logic. Tom then continued to humiliate Frank by adding an Arrogant Wurm and Looter to his team. Frank tried a Fiery Temper but met another Logic. This did enable Frank to take out the Looter with his Lavamancer before things went completely out of control.

Flametongue Kavu tried to shoot down the Arrogant Wurm, but Aether Burst saved it. Frank then Firebolted the Mongrel so Tom would tap out to replay his Wurm. This was all accounted for in Frank's masterplan as he could now use Violent Eruption to kill the Wurm for good and finish of the Mongrel with his Lavamancer. Tom had another Aether Burst to clean the house again. Tom emptied his hand with Merfolk Looter and Arrogant Wurm, then said he could really use a Bearscape. This clearly showed his ability to look forward in time, as Frank laid a pair of Barbarians for which Bearscape is a great solution.

The Bearscape came directly after that out of another Fact. Frank now also showed his professional abilities by topdecking a second Flametongue Kavu and killing the Looter with it, in fear of Tom's notorious Poker Face...

Tom ripped Aether Burst nr.3 to clear Frank's team but Frank Called two Elephants to match the Bears. The Bears came with more and more at a time and all Frank could do was being on the receiving end of Tom's damage for a while. However, he kept fighting with Violent Eruption (when he was attacked for lethal damage) and the ever-present Lavamancer.

Yet another Fact or Fiction gave Tom a Mongrel and some more Bearscape ammo, but Frank just kept drawing Violent Eruptions, and both players played draw-go fo while, with Tom making some more Bears in the process and Frank killing them with his arsenal of removal.

This state of staring armies could not go on forever as Tom had Upheaval in his ever-shrinking deck. After Frank played a second Lavamancer and Tom had formed an army of two Arrogant Wurms, a Wild Mongrel, Basking Rootwalla and a Bear token he send his whole team in against Franks two Call tokens, Mongrel and two Lavamancers. Frank had to discard his hand to save his Mongrel, so he could kill the two Wurms and a Bear token. Another Mongrel and Unsummon from Tom sealed the game after alnost 40 minutes.

Both players sideboarded as many "dikzakken" ("fatties" for those of you who don't speak Dutch) while boarding out slower cards. With less than 20 minutes on the clock, Frank rushed Tom a little to finish this match even though both players were already out of contention. 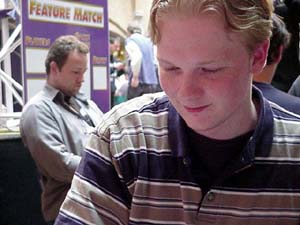 Frank had to mulligan again and kept a prety mediocre hand but did manage to play consecutive Mongrels and a Call of the Herd, but stalling on three lands. In the mean time Tom started pretty ideal with a turn 2 Mongrel and a turn 3 Arrogant Wurm which kept Franks forces at bay.

Tom cast a Fact or Fiction revealing Mongrel, Rootwalla, Unsummon and two lands. He got the Mongrel and two lands but being tapped out gave Frank the opportunity to kill the Arrogant Wurm. Then the first "dikzak" came to play on Tom's team: Gurzigost. Frank proceeded to Flametongue Kavu Tom's Mongrel but he would have none of it, discarding three cards to save it.

The next turn the Gurzigost got gangblocked by Mongrel, Flametongue Kavu and an Elephant token. Tom had the Aether Burst, which made Frank discard two times to his Mongrel in order to kill the 6/8.

After the next attack a second Gurzigost came to play and to town, together with a Jade Leech and then the real battle of "dikzakken" started; Frank could finally windmill-slam his own Jade Leech into play. After a single one-way trip into the red zone Frank had satisfied his little boy's spirit and could offer the current World Champ the handshake. The bigger fatty had prevailed.