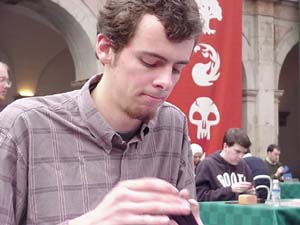 Finally we cover the World Champion. He was already due for a feature match by now and since he his playing good old Sligh he could do with a quick round. As we saw early Tiago was one of the players who won it all yesterday and is playing SuperGrow.

The original Grow supposedly has a lot of trouble against Sligh. Lets see how well SuperGrow can handle the deathly power of the Mountains.

A Fanatic pop up early on, followed by a Jackal Pup while Chan tried to build up his mana base. He had a strong hand with three Werebears and two Mystic Enforcers and all he needed to do was withstand the initial blitz until he reached threshold to drop the bombs.

A Swords sent the Pup away and Tom sent a Volcanic Hammer to Tiago's head. A Land Grant showed van de Logt the trouble he had ahead. The five threshold creatures, along with a Daze, were more than enough to turn the game around if he couldn't pack it away early.

A Ball Lightning was a perfect way to speed things up.

Tom (with one untapped land): "You want to Daze it?"

The fiery hit brought the Portuguese tumbling down to eight. He Gushed for answers and dropped a small Enforcer. The Dutch had a tough decision to make: should he Incinerate the monster or throw it at Chan in an effort to reach threshold to finish things up with his three Barbarian Rings.

In the end he decided to wait it out and passed the turn. Both decks were showing that Odyssey's new mechanic - threshold - has quickly become a part of the Extended strategy.

When Chan was about to reach threshold Tom finally threw the Incinerate to Chan's head. The now huge Enforcer came in setting the clock and a MegaBear was summoned to hold the fort.

The spidery Dutch reached for his deck and drew... Fireblast. He played his third Ring and drew mana from two Mountains before casting the spell.

Tiago: "Fireblast! Did you really draw a Fireblast?!"
Tom: "Yup. Third top deck in a row."
Tiago: "I had a Force of Will in my hand!"
Tom: "That was the only I card that could save me. Draw Fireblast or die."

Wastelands are really good against land-light, dual-filled decks. Tom tried to prove this with two Wastelands in the first two turns but Chan had a third one to try to muscle out of that situation.

Two blown Furnaces and a Brainstorm later he still hadn't found a second land. Tom's lone Fanatic was more than happy to be the only creature on the table, gleefully nibbling away at Tiago's life total.

The Portuguese played another Furnace and blew a third Furnace to finally find the coveted second land (not counting the two he lost early on). By then van de Logt had a Powder Keg on the table waiting to climb up to two and blow away any potential blockers.

The Fanatic did the best it could but he was working too slowly to bring Chan into range of the Fireblast and Incinerate on Tom's hands. The Portuguese found a third land and played a Quirion Dryad.

A Keg explosion took away the Dryad and the Fanatic was again ruler of the red zone. A MegaBear (with threshold) came in and Tom stopped to ponder. He had two Fireblasts, Incinerate and Barbarian Ring in his hand.

That totaled thirteen points of damage and together with the Fanatic on the table could finish the game, and match, if Chan couldn't find a counter for them. The Portuguese played a Gush and then a Land Grant. This showed Tom he had no counter. Only a Gush to find a Force of Will and a Swords to use on the Werebear.

That left Chan at three. The Portuguese agonized over the options without knowing all the Dutch needed to do was untap drop the Ring and sacrifice it along with the Fanatic to win the round, unless Chan played the Swords.

The Dutch drew Firebolt and play it and Chan sent the MegaBear farming. The Fanatic attacked dropping the backpedaling Portuguese down to four again. He Gushed looking for a way out and played a huge Enforcer.

He had a huge breath of relief when all van de Logt could draw the next turn was a simple Mountain. All the Dutch needed now was a measly point of damage to finish things up. Another Land Grant showed two Mongrels, Werebear, Mystic Enforcer and Sleight Of Hand. Again there was no counter to stop the World Champion, unless Chan could draw one with the Sleight (he got a Dryad).

Tiago: "Go and draw a Mountain."

It was a Pup. Chan sent his crew in and played the two Wild Mongrels to hold the forest. It was Tom's last chance to win the game since he was now at three. Ironically Chan's curse worked a turn too late giving Tom van de Logt a Mountain. He sent the Pup and Fanatic in and scooped when the Portuguese blocked.
Tom 1-0 Tiago

After such an intense, and tense, game they used the shuffling time to wind down a bit. The third game got underway with less than seven minutes on the clock. Tom's hand came out weak and he had no first turn creature.

A second turn Powder Keg was more than enough to match up against the incoming Quirion Dryad. In fact van de Logt decided to keep the Keg around a bit longer and Firebolted the Dryad away before dropping a Pup. 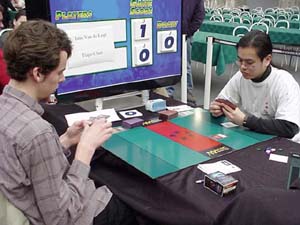 Chan played a Winter Orb a Quirion Dryad before showing his hand (Werebear, Winter Orb, Sleight of Hand, Phyrexian Furnace) to use a Land Grant. When he tried Sleight Tom burned away the Dryad.

With his opponent all tapped out the Dutch attacked with the Pup and pondered using his Price of Progress for eight damage. He did use and Tiago took the damage falling down to eight just as time was called.

The Keg blew up taking away the Orb and the Pup brought the Portuguese down to six.

He called it right and Tom was quick to follow: he Fireblasted the Portuguese down to two. Chan blew up a Flood Plains and two Furnaces to draw three extra cards reaching threshold and casting a Werebear.

Tom reached the top of his deck and flipped the top card: Incinerate. He cast it tapped his last land, the Ring, to pay the Daze and Tiago Chan conceded. A very close third game to go along with the other two very fought games.

Ben Ronaldson: "Tom, have you played any game today were you haven't top decked something?"