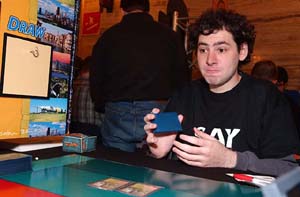 Both Finland's Tomi Walamies and Argentina's Diego Ostrovich had fantastic seasons last year, earning berths in the Magic Invitational. Since then, Ostrovich has been having a pretty good year, showing that he is here to stay. Walamies, on the other hand, has been ready to pack it up for the past few months; a string of poor finishes has had him ready to retire. After this event, he's going to have to reconsider.

Walamies Goblin deck did what it was supposed to, dropping out a Skirk Prospector and a Sparksmith early, and using the former to accelerate out a turn-3 Clickslither.

Ostrovich, through Walamies' bludgeoning attacks and his own fetchlands, found himself at five life before he put his first creature on the table. Walamies showed the South American who was boss when he dropped a Menacing Ogre, forcing the scoop. Quite the quick and bloody game. 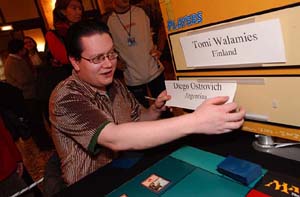 Walamies attacked with a Skirk Prospector turn 2 only to see it die at the hands of a Vitality Charm-spawned Insect. Diego played a Lightning Rift on his turn and passed.

Walamies played Thoughtbound Primoc on turn three, and it was quite evident why "the Littlest Serendib" is in favor this weekend: he doesn't die easily to Lightning Rift. That, and there are no Wizards to be found in the environment. Of course, Ostrovich showed why Chain of Plasma was in his deck, killing the flier with little effort.

Ostrovich had a little game, but in the end, how can you stop the big Dragon? Without Contested Cliffs, Ostrovich had no outs, and died in three hits.

He said as he left the table, "I would like to send greetings to the staff at my school, Mikkeli School of Economics."