Round 11: Trevor Blackwell vs. Dave Williams Trevor Blackwell got paired down against David Williams in round 11 of GP Denver. Blackwell was 7-2-1 and Williams was 7-3.

Trevor Blackwell has become one of the premier pros since he won PTLA last year. He followed it up by winning US Nationals this year. He played a blue-green-red beatdown deck with Emblazoned Golems.

David Williams is coming off a disappointing DQ in the top 8 of World Championships last weekend. Many feel his marked cards were not intentional making it perhaps the worst beat in PT history. Others aren't so sure. It is a credit to Williams that he is back to compete just one week later after what must have been a terrible experience. Williams went to the internet for his deck choice. He took the undefeated blue-white-red deck from the day before at GP Kobe and replaced the Excludes with Flametongue Kavus.

Game one went well for Blackwell at first. He beat down Williams with a Mongoose at first while he Repulsed his William's Galina's Knight two turns in a row. Williams played a Lightning Angel that got two Fires played on it. Williams played a Galina's Knight and a Goblin Legionnaire to stop the beats. Blackwell returned with a 4/5 Emblazoned Golem. Williams got back in the life race by playing Ice on Blackwell's Golem two turns in a row. Williams then drew a Lightning Angel, which sealed up the match for him. 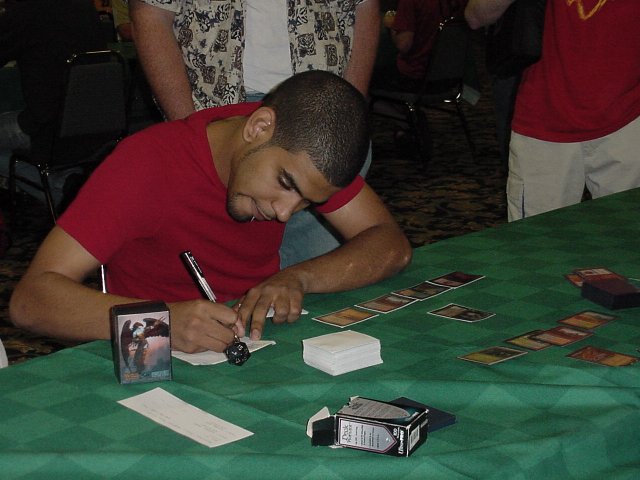 Game two, Williams played a Galina's Knight and a Goblin Legionnaire early. Blackwell Flametongued the Goblin, which made the world safe for the Lightning Angel that Williams played the next turn. Blackwell won a counter war to Repulse the Angel, but Williams just played it again and continued the beats. A pair of Rages finished off Blackwell.