Round 11: Tsuyoshi Fujita vs. Shu Komuro

The cavalcade of Red-White mirrors continues in this, the eleventh round of competition. This time it's relative unknown Shu Komuro against Tsuyoshi "Mr. Rolly" Fujita, best known as the guy from the finals of Pro Tour Tokyo, but now the head of a cadre of strong Japanese talent.

Fujita led with a pair of Silver Knights that got in for early beats. Komuro slowed them with an Astral Slide, and Fujita complicated matters with a morphed Angel. Komuro's fifth land was a Temple of the False God, letting him play his Angel face-up. Fujita swung in with his crew, and after Komuro blocked one of the Knights, Starstormed for three, clearing out both Angels. 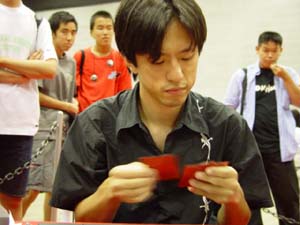 Komuro was getting low on life, and tapped out for Eternal Dragon. Fujita made a Lightning Rift. Komuro went for a backbreaking cycled Decree of Annihilation. Fujita could only shoot him and cycle an Eternal Dragon for a second shot, leaving him at four. Fujita was at fifteen. He drew a second land, but had no cyclers, and the Dragon was beating down overhead. His Silver Knight fell to Wing Shards, and then he had no outs.

Komuro opened with a strong sequence of Rift, morph, unmorph Angel and hit for four, while Fujita only smoothed his draw with Eternal Dragon. However, he had a Temple of the False God on turn five to enable Akroma's Vengeance and clear the board. Komuro made no play, and Fujita played a face-up Angel. Komuro still had no play. Fujita further bustigated things with an Astral Slide. Komuro took four. Fujita added a morph.

Komuro played his seventh land and an Eternal Dragon. Fujita got it out of the way for a turn, regrew his Dragon and hit for six. Komuro played a second Dragon. Fujita chose not to fight over them and just flipped up his other Angel. On his turn he played an amplified Kilnmouth Dragon. Komuro had nothing to say to that. Fujita played yet another morphed Angel.

That was Komuro's cue for action. He dropped Akroma's Vengeance. Of course, Fujita had a wealth of cyclers and saved three of his creatures. Komuro had no Wing Shards, and died on the next attack. 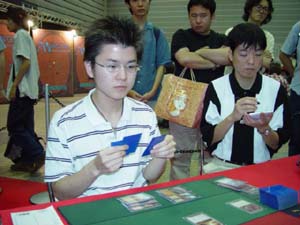 Komuro was first on the board with a Lightning Rift, and Fujita held back on his Astral Slide. They played land after land, and then matched amplified Kilnmouth Dragons. Komuro offered the trade and Fujita accepted. He played out a replacement Eternal Dragon. Komuro cycled Decree of Justice for four soldiers and two damage. He untapped and swung in, then passed it back. Fujita held his ground and played a face-down Angel.

Komuro Vengeanced it all away. Fujita brought back his Eternal Dragon and made an Astral Slide. Soon the Dragon was in play, and Fujita was just waiting for an opening to cycle his Decree of Annihilation. Komuro didn't give up easy. Akroma joined his side, and made the Decree a losing option.

Soon Komuro had an Astral Slide of his own. Fujita tapped out to cycle at the end of Komuro's turn, and Komuro dropped a cycled Decree on his head. Fujita was at high life, though, and was able to survive to find his third land for Oblation at just five life. From there, it was a long haul of trying to find land number five to recurse Eternal Dragon. Komuro hit it first, and soon found eight land. Coincidentally, Fujita was nearly tapped out, so Komuro's incoming Akroma was able to neatly steal victory.