When Jon Finkel makes it into a feature match, he always manages to pick the good ones. Yesterday we saw his Pyromancer Ascension / Pyromancer's Swath / Storm deck destroy Pat Chapin in two turns during the Modern rounds, and Finkel was back in the feature match arena in the final round of the Draft element of Pro Tour Philadelphia. In case you needed a highlight of Jon Finkel's resume, it included being a former World Champion, multiple Pro Tour and Grand Prix champion, and Player of the Year.

His opponent this time? The unstoppable Japanese juggernaut Yuuya Watanabe, who was fresh from winning back-to-back Grand Prix in Shanghai and Pittsburgh during the last two weeks, and had revived his chances of becoming the second two-time Player of the Year, having claimed that title in 2009.

Starting the day on 5-3, both these players needed to make a flawless run through Day Two to make it into the Top 8, but they had both made the perfect 2-0 start in their draft pod. One of those records had to end here, and the loser of this titanic struggle between former Players of the Year would almost certainly wave goodbye to his chances of playing in front of the cameras on Sunday.

Watanabe won the dice roll and began his offense with an Armored Warhorse from his white-blue deck, following that with a Roc Egg and Jace's Archivist. An Alabaster Mage followed, and then the Japanese pro cast a Pacifism onto Finkel's Goblin Arsonist. 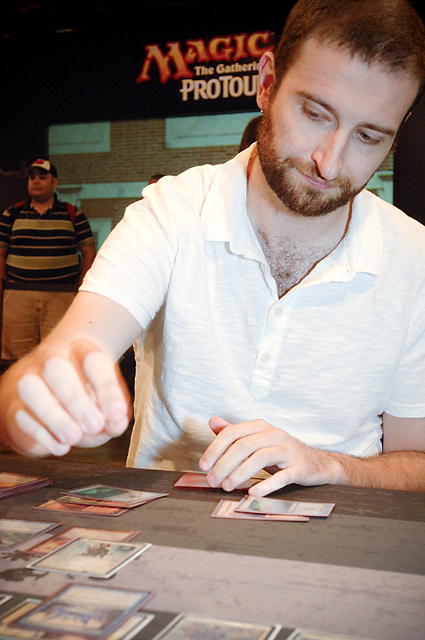 Former Player of the Year Jon Finkel is pretty good at Magic.

That Arsonist was the only thing that Jon Finkel had cast during the first four turns, as the American legend was stuck with three lonely Mountains in play, unable to cast any of his spells!

Yuuya Watanabe offered Finkel a possible route out of his mana problems by activating Jace's Archivist, meaning both players would discard their hands and draw new ones. For Finkel that meant he got to dump all the cards he couldn't play and finally got a supply of land. Using the Archivist seemed like an odd play from Watanabe, but he had obviously been rewarded with his own cards, and the Japanese pro unloaded as he untapped, adding a Gideon's Lawkeeper, Gideon's Avenger, and Stormfront Pegasus to his forces before attacking to put Finkel down to 10.

The table almost seemed to sag under the weight of cards that Watanabe had on the board, while Jon Finkel still had only his lonely Goblin Arsonist—and that had a Pacifism on it! Finkel fought back bravely, trapping the Alabaster Mage inside an Ice Cage and deploying a Sidewinder Drake to defend from Watanabe's air force, but it was ultimately futile. Watanabe simply tapped the Drake with his Lawkeeper and pressed the attack even further.

Jon Finkel was down to 3 life and facing a host of creatures. There was no way out, and he picked up his cards.

That bad luck continued for Jon Finkel at the start of the second game, and he had to mulligan away his first hand. After drawing six cards he seemed much happier, though, and Finkel began with a Ponder before casting an Æther Adept to stall Watanabe's threat of an early offense, putting Armored Warhorse back in the Japanese pro's hand.

Watanabe turned to an air force and cast Griffin Sentinel, although the Griffin was immediately cut down when it attempted to block the Æther Adept, with a Slaughter Cry making the blue Wizard a 5/2 first striker for the turn.

So much for the aerial route! Watanabe returned to the ground approach, throwing down a pair of Gideon's Lawkeepers and a pair of Armored Warhorses. That was Finkel's cue to take to the skies himself with a Skywinder Drake, adding a Goblin Arsonist to deter Watanabe from attacking on the ground. That early flurry of creatures ended with the Japanese pro casting Jace's Archivist, and the two players paused to take stock of the battlefield. 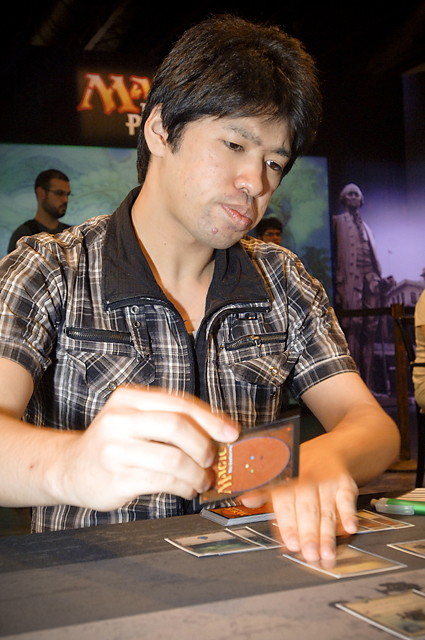 His opponent, former Player of the Year Yuuya Watanabe is, as it turns out, also quite good.

Returning from his brief dip in the tank, Yuuya Watanabe cast Levitation, giving Flying to all his creatures! The blue enchantment turned his Warhorses into Pegasuses, and Watanabe sent his creatures into the Red Zone right over the heads of Finkel's blockers to deal 7 damage. That attack had dropped Finkel to 8 life, and the American attempted to level the odds with a Mind Control, but the Jace's Archivist his received was helpess as Watanabe's men attacked through the air again, with Gideon's Lawkeeper keeping Finkel's Skywinder Drake pinned down.

Down to 2 life now, Finkel was on the ropes and all out of options. Holding his forces back for defense he passed the turn with a resigned shrug, and Watanabe was ready to deliver the final blow. The back-to-back Grand Prix champion took a big step towards another Top 8 by playing Pacifism onto Finkel's Skywinder Drake and freeing up his Gideon's Lawkeepers to join the attack. As Watanabe's troops marched into the Red Zone, Finkel conceded defeat.

Jon Finkel's Sunday dreams were over, while Yuuya Watanabe emerged unscathed from his second draft pod to stand on 8-3 overall, still in the hunt for yet another back-to-back title!