Round 11: A Two-Pronged Attack

Brozek mulliganed on the play, and his Myrsmith earned a Virulent Wound from Rietzl. Rietzl followed up with Necropede, and after Brozek played Glint Hawk Idol, added Rot Wolf to the mix. Brozek played a third land and Tempered Steel, accepting the incoming poison damage. 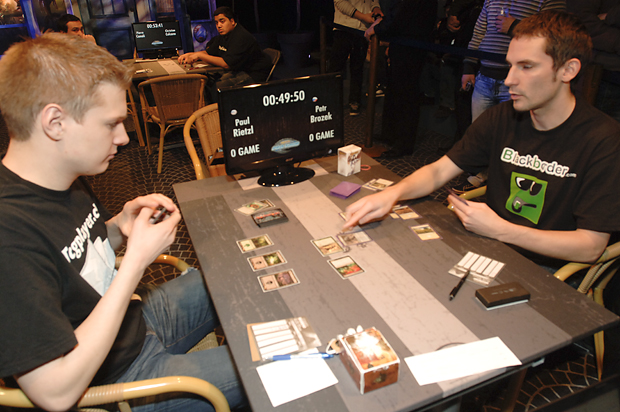 Paul Rietzl, left, fights it out with Petr Brozek.

Rietzl bolstered his team with Contagious Nim and put Brozek to five poison. Brozek had no fourth land, and simply passed the turn. Rietzl's monsters charged, but Brozek had Divine Offering for the Necropede and animated his Idol to devour the Wolf. He stood at seven poison counters. Rietzl was also short on land. He tapped out for Phyrexian Digester.

Brozek drew and shrugged his shoulders, then cast Gore Vassal. Rietzl turned his guys sideways. Brozek then sacrificed the Vassal to kill the Digester, but Rietzl had Untamed Might for a suddenly lethal strike.

Brozek had turn-two Myrsmith again this game, and it survived a turn unscathed. Rietzl dropped Plague Stinger, and Brozek swung in. Rietzl paused for a moment but accepted the trade.

Brozek passed the turn on three land with no play. Rietzl played a Forest and passed. At end of turn Brozek cast Master's Call. He untapped and hit for 2, then tapped four and sighed, thinking. eventually he played Hero of Bladehold, signaling a potential blowout. 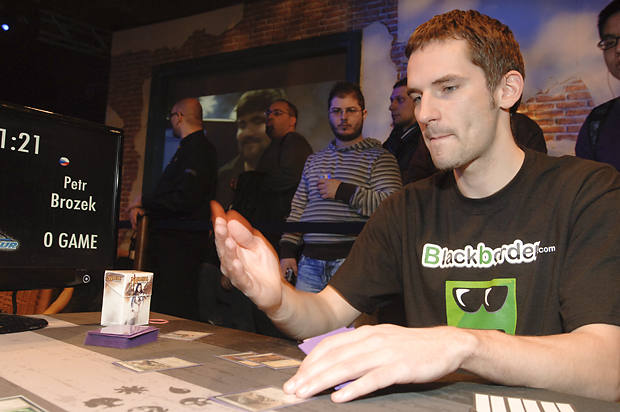 Fun fact: That screen in the background is showing Brad Nelson at actual size.

All Rietzl could do was play Corpse Cur and pick up his Plague Stinger. Unfortunately for him, it was even worse than he suspected. Brozek untapped and dropped Tempered Steel, supersizing his two Myr. Then he charged in with the team, and the Hero of Bladehold brought friends. He surveyed his attackers.

The Cur stood in front of one of the Myr, and Rietzl took 11 damage, down to 7. He untapped and quickly played his fifth land, eager to Spread the Sickness onto the Hero of Bladehold and finish off the infected Myr, but it was too late. Brozek added Myr Galvanizer and attacked for six more, leaving Rietzl at 1. Rietzl agreed that he was dead.

Rietzl started by giving Iron Myr a Virulent Wound, then followed up with Necropede. He gamely swung in to Brozek's three open mana. Divine Offering knocked it off the table. Rietzl replaced it with Tangle Mantis, and Brozek summoned Chrome Steed and passed.

Rietzl swung in for 3 and made a Trigon of Corruption, tapping out. Brozek hit back for 2 and played Myrsmith. Rietzl surveyed the situation and went into the tank for a minute. He tapped three for Viridian Corrupter, knocking out the Chrome Steed and hit again. Brozek made no play, and Rietzl charged with his creatures, a mix of infect and noninfect.

"Two-pronged attack, here," said Rietzl. "Coming at you from both angles. Also, you only have twenty-seven cards left in your library. So... you know."

Brozek let it through. Rietzl played Horizon Spellbomb and passed. Brozek drew, played his seventh plains, and passed it right back. The Trigon spat out an Insect. Rietzl untapped and cracked his Spellbomb for a second Swamp, then attacked. Myrsmith blocked the Corruptor and Seized the Initiative to kill it, and Brozek fell to 10 life and rose to four poison counters. 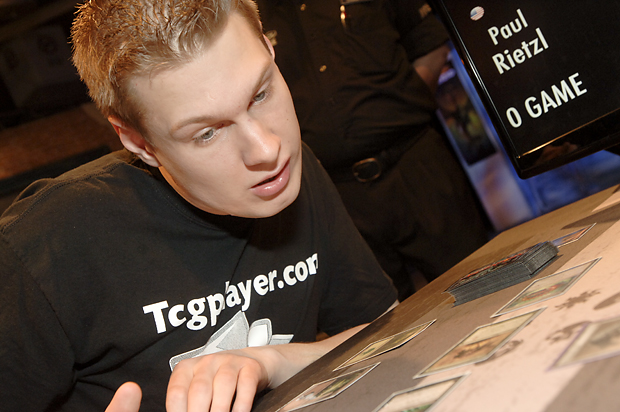 Rietzl looks high and low for a way to win a two-front war.

All Brozek could muster was a Gold Myr and a bonus token from the Myrsmith. Rietzl kept on making insect tokens and attacked again. The two tokens traded and Brozek's life dwindled. Next he made a Gore Vassal, but Rietzl went over the top with his Trigon and Carrion Call, swarming the board. They jammed into the red zone. Myrsmith and Vassal were forced to kill a pair of insects, and Brozek was down to 4 life and up to seven poison counters. Rietzl made Bladed Pinions and gave them to his Mantis. Still Brozek had nothing, just a wealth of Plains. He conceded the game at 1 life and nine poison.