Round 11: : The Unending Battle

This match is not for the faint of heart. On paper, it looks like a relatively simple match, but unless you thoroughly like back and forth swings multiple times in one game, and seemingly endless waves of creatures running into each other (and who doesn't), this match may make you go cross-eyed.

Eleven rounds in and Paulo Vitor Damo da Rosa and Gerry Thompson still knew how to throw haymakers back at one another, batting back from the brink multiple times. 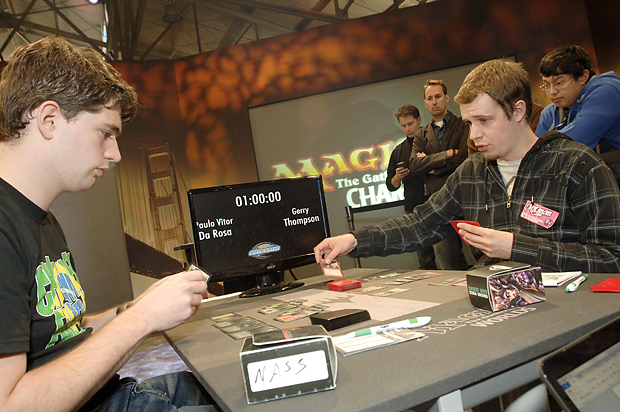 Gerry Thompson and Paulo Vitor Dama da Rosa clash heads in a question that plagues the minds of pop-culture enthusiasts everywhere: who would win in a fight? Vampires? Or Werewolves?

Without further introduction, because there's plenty of action ahead, we present to you the epic tale of Thompson versus Vitor Damo da Rosa, and vampires versus werewolves.

Da Rosa was on the board first with a Villagers of Estwald, which Tompson kept it from Transforming with a Nighbird's Clutches, curiously without any other early plays in his Red-Black deck.

Da Rosa's Transform deck kept the Werewolves coming with an imposing Daybreak Ranger, a card that could, um, break the game wide open for the Player of the Year hopeful.

But the rare Human Werewolf wasn't quite as frightening when its only target was Rotting Fensnake, which could tumble with a transformed Nightfall Predator and, if not live to tell the tale, at least take it down into the fen with him.

Da Rosa declined to play any spells on his turn and played a mountain to give his now Nightfall Predator the ability to fight while also turning some previously tame Villagers into a Howlpack of Estwald. However, the Vampire Interloper Thompson played gave da Rosa pause, as Thompson had up Brimstone Volley mana. Da Rosa decided it wasn't worth turning on Volley for 5 and passed without letting his Nightfall Predator fight the 2/1. 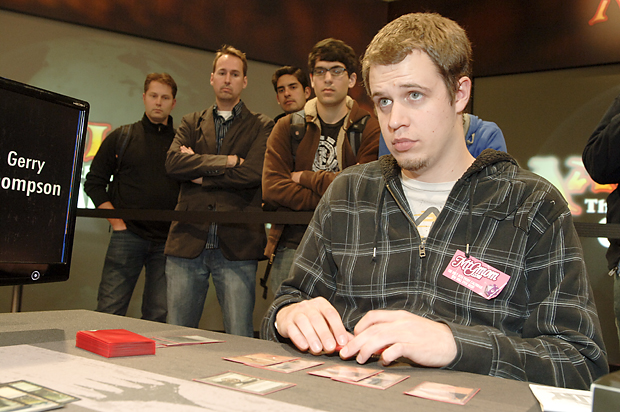 Thompson was down a game, but he wouldn't lose the match without a fight. One very long, painful, fight.

But Thompson wasn't without resources. He used Altar's Reap, sacrificing Vampire Interlopers in order to find and play Pitchburn Devils and lock up the board, except for the difficult to nail down Orchard Spirit. A flashed back Nightbird's Clutches allowed Thompson to sneak in some damage and force a trade with Nightfall Predator, but several turns of battling over transforming and re-transforming the Villagers of Estwald left Thompson's forces depleted and smaller than da Rosa's werewolves.

Eventually, Thraben Sentry threatened to get big as well, and after a few attacks, Thompson was overwhelmed by a Wolfpack of Estwald that had survived all of the carnage.

Thompson chose to play, but threw back his hand saying, "This is the worst four spell, three land hand I could have."

After drawing a much better six, Thompson made the first move with a Rakish Heir, and da Rosa played his own 2/2 with a Gatstaf Shepherd.

Vampiric Fury made sure the Rakish Heir came out on top in combat, and Thompson had a Walking Corpse to follow up, as well as a Crossway Vampire to keep da Rosa's freshly played Thraben Sentry at bay the next turn.

However, Thompson's fast start turned from what looked like a one-way blowout into a game that was most certainly not for the faint of heart. At least for those who find clogged boards and combat math difficult to process. Basically, this next section can be summed up as "a lot of stuff died and no one gained any lasting ground."

First, Fiend Hunter did what Fiend Hunters do and took care of the Heir, then da Rosa used Moment of Heroism to make his Thraben Sentry take down a Crossway Vampire and gain some life.

Then, just when it looked like da Rosa had seized back the initiative, Thompson played a Pitchburn Devils to give Thompson some presence on the battlefield, and da Rosa fired back with an Manor Gargoyle.

The Devils attacked through da Rosa's Blockers, and Thompson unloaded his hand with a Vampire Interloper and a Morkov Patrician.

Thompson paused to ask about the back side of Thraben Sentry, before ultimately attacking with just his two vampires. The Interloper traded with the Griffin, turning the Sentry into a 5/4 trampling Thraben Militia. Da Rosa then played Villagers of Estwald on his turn and passed without attacking into the Pitchburn Devils.

With no plays, Thompson helped transform the Villagers, but that Pitchburn Devils gave da Rosa pause. He eventually attacked and Thompson used the Devils to trade with the Villagers.

Then another Devil showed up to muck things up. Charmbreaker Devils returned Vampiric Fury, but with Markov Patrician on defense, that was enough to discourage any attack for a number of turns.

But while the attackers were all staring at one another, Da Rosa found his Daybreak Ranger, only to lose it to Into the Maw of Hell. Before the Charmbreaker Devils could start looping the overly destructive removal spell, de Rosa aimed a morbid Brimstone Volley at the troublesome creature.

After that sequence, the two pros passed back and forth for several turns, interspersed with a Moan of the Unhallowed here and an Ashenmouth Hound there.

Prey Upon killed the Morkov Patrician, and Villagers of Estwald came down to threaten to go big, which it did when da Rosa passed without playing a spell on his next turn.

Thompson played Hanweir Watchkeep, and da Rosa was stymied once again. The board had thoroughly stalled out. Again. 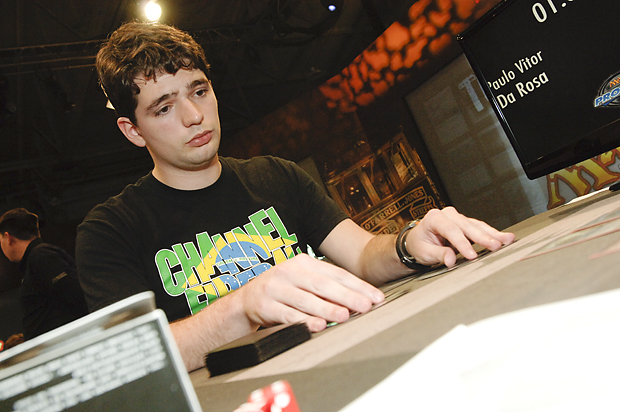 It took approximately eighty-seven turns and the cumulative deaths of thousands of Werewolves and Vampires, but, eventually, da Rosa was able to break through.

Spectral Rider, however, gave a glimmer of hope at last for da Rosa. Even if Thompson used his Blazing Torch to, well, torch it, then it would turn on a second Thraben Sentry. Instead, Thompson took the damage while da Rosa added to his board.

Bane of Hanweir was forced to attack, earning a double-block from the Bane of Estwald and a Somberweld Spider. Torch killed the Thraben Sentry before it could transform, and a Brimstone Volley killed a Thraben Malitia.

Meanwhile, the Rider kept riding in, and da Rosa found a Chapel Geist.

But da Rosa finally, finally, broke the game open with a Butcher's Cleaver. With no nope of racing the powerful equipment, Thompson worked to squeeze in some damage here and there, but a timely Bonds of Faith, a Villagers of Estwald and an unblockable Orchard Spirit were, after an epic battle, enough to put the game and the match away for da Rosa.