Round 11: William "Baby Huey" Jensen vs. Bob "The Great One" Maher 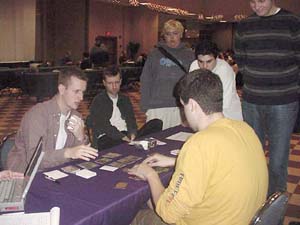 The sign on the table said "The Great One vs. Baby Huey," and that about sums it up; these are two well-respected players facing each other for the first time. Ever.

It's the mirror match, as both of them are packing R/G draft decks - and it was a literal mirror match at first, as both of them dropped the exact same lands, then used their second turn to call up a Wall of Mulch. Maher then broke the doppelganger play after stumbling on his third turn, missing the land drop; Huey encountered no trouble at all, dropping his third land and a Nosy Goblin.

Maher laid a land, causing Huey to smile and say, "I bet you drew that." In an astonishing display of Morphling-like mirror art, both of them cycled Krosan Tuskers - but while Maher did so at the end of Huey's turn, Huey did his mainphase and dropped his fourth land.

The two of them jockeyed for position, with Jensen turning up a Snapping Thragg and a Goblin Machinist, while Maher laid a Mauler and attacked into the Machinist, finishing it off by cycling one of his three Solar Blasts.

He attacked with the Mauler; Jensen blocked with his Wall of Mulch, then sacrificed it for a card. Maher laid a Symbiotic Beast.

Huey looked at his cards; he was rapidly becoming outgunned, even though he had six cards and three creatures in play. He laid a Goblin Sledder, then flicked through his cards, waiting to see what to do next; he chose to cast yet another morph, leaving two green free.

Maher leaned forward, staring at Jensen's cards as if he was trying to develop X-ray vision. He tapped two mana, muttering, "That's nasty," trying to decide where he should put the Crown of Fury down; he ultimately chose the Mauler, then sent the now-5/4 first striker in. Jensen Naturalized the Crown in mid-combat, leading The Great One to ask, "Is Snapping Thragg a beast or no?" It was. Maher wisely chose not to give Huey's Thragg a first strike as well, which would kill it. Instead, a Thragg and a Sledder bit the dust.

Jensen left his mana open, evidently hoping to morph into something good... And when Maher sent his Symbiotic Beast in, Huey waited until damage was on the stack and two had been distributed evenly to morph his Hystrodon out of fatal damage. Four 1/1 tokens still came into play on The Great One's side, though.

Huey passed his turn with two cards; Maher used his turn (and a couple of Birchlore Rangers) to cast Pinpoint Avalanche to bury the 'Don; Jensen summoned a lone 8/8 Stag Beetle, which was impressively large but facing a horde of 1/1s and other green beasties. Maher attacked with all four 1/1s... And then summoned another Symbiotic Beast.

"That's surprising, given how many tournaments we've been to," said Maher. "You think we would have played."

"And how much we travel," allowed Jensen. They shuffled up, and Hey opted to go first.

Huey kept his hand without a moment's hesitation, while Bob Maher also took no time... To mulligan. He kept a three-lander, shrugging, "I'll keep it."

Huey laid a mountain and a Goblin Sledder, which hit once before Maher summoned an Elvish Warrior to throw in front of it. Jensen then cycled a Mauler to get a third land to play his morph creature.

Maher countered with his own morph, but Huey laid two back-to-back hard-cast Battering Craghorns. Maher could only counter with a lone Wall of Mulch and a Wellwisher.

Huey looked at the army of beasts amassed in front of him and flipped his hand insouciantly, casually handing the turn over to Maher - who drew land and laid it, but not much else. At the end of the turn, Huey morphed into his Snarling Undorak, creating a slight advantage in creatures... But not enough to commit to an assault. He instead laid a morph, hoping to outjockey Jensen.

At the end of the turn, the Wellwisher began to pump Maher's life up, three points at a time. Bad news for aggro. 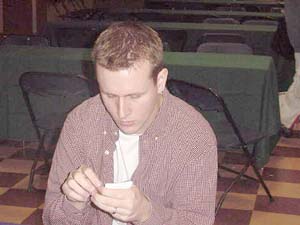 Jensen finally committed to an attack with the pair of Craghorns and the Undorak, leaving mana open to pump in case of some sort of direct damage. Maher threw the wall in front of one Craghorn and everything else before the Undorak... But Jensen unleashed a Pinpoint Avalanche to kill the Champion, causing a complete rout. The Wellwisher squeaked out a final three points of life before she died screaming....

But it wasn't over yet. Maher fired off a Thunder of Hooves to clear the rest of the beast-laden board, leaving only the Undorak and the Wall of Mulch. Huey's Undorak met Maher's Mulch and bounced; he could have pumped him, but opted instead to save mana for the Snapping Thragg.

Maher laid a Barkhide Mauler and a Symbiotic Beast, while Huey laid a Goblin Machinist; despite the clearinghouse sale of the Thunder of Hooves, the board was being rebuilt quickly.

Huey shrugged as a smaller, but still threatening, beetle came into play.

Maher's next turn was a flurry of creatures: Morph, Wirewood Elf, and a Crown of Fury on the Symbiotic Beast. He hadn't built up quite enough of an advantage to attack in, though, so he passed the turn.

Huey ran his fingers through his hair, considering his options; he cycled a Krosan Tusker, hoping to thin his deck and get more land...

And then Erratic Explosioned Maher.

It was only for three, though, and dropped Maher to sixteen.

Maher, smelling some sort of trap, started counting Huey's creatures a lot more closely; what red or green Onslaught card could reduce him from sixteen to zero in a turn? The answer was apparent after a moment's though: Wave of Indifference. Baby Huey was hoping to find a good card to pump the Goblin Machinist and then Wave Bob out of the game... And everyone at the table knew it.

Maher sent in the Symbiotic Beast.

Jensen fell to twelve, and then to seven as Maher attacked again. Jensen kept activating the Machinist, hoping to find some huge card, but found nothing but two- and three-mana cards.

Finally, Jensen blocked with his Wall of Mulch, staving off the Beast assault, then cast leery Fogbeast and Nosy Goblin, hoping to raise his army to a point where all the tricks in the world couldn't save Maher from his Wave. 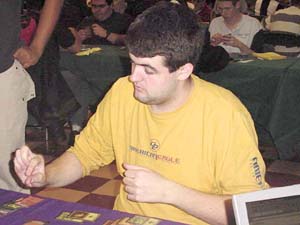 Maher unmorphed Commando and Craghorn, cycled a Forgotten Cave, then kept up his single-Beast assault with the Crowned Symbiotic Beast. Huey tapped his creatures significantly one by one, trying to figure out which one he'd have to lose... Or could he afford to not block, take the damage, and then perhaps fall to a Solar Blast? He counted Maher's graveyard, trying to figure out how many Blasts were left, then chumped with the Goblin.

Sure enough, Huey had the Wave the next turn, sending with everything in an attempt to alpha-strike Maher out of existence.

...But in an even sneakier move, Jensen used a Vitality Charmto regenerate Maher's beast! No chump blockers for you!

However, "cool" does not always equal "effective" in tournament-level Magic - and although it's the kind of play you'd be talking about for weeks in any multiplayer game, the single green mana left Huey with only two open - not enough to activate the Machinist. And without the Machinist, he didn't have a hope of doing enough fatal damage to punch through.

But Maher now had fatal damage on his side, and Huey was utterly tapped out. Sighing, Huey conceded.

Essentially, Jensen had all but told Maher flat-out that he had the Wave of Indifference in his hand - gambling that he could find either Hystrodon, a Krosan Tusker, or the Snapping Thragg in his deck to Machinist Maher out of existence. He needed the Machinist to win, since Maher's hand had three Solar Blasts and a Shock in it, and he could have wiped out a considerable portion of Baby Huey's army in response to the attack. But the cards just weren't on Jensen's side today, and he fell and fell hard, 0-2.