Covering feature matches can be hectic work--three games all going on at once, with no set stops to have mercy on the poor Sideboard reporter who has to get it all on the record. Sometimes you get lucky, and the match you're watching the closest is the one that happens to cinch the Top 4 berth.

This was one of those times.

The two teams competing for the right to play Magic on Sunday were both deserving ones. Zabutan Nemonaut, composed of Eugene Harvey, Gary Wise, and Mike Turian, found themselves very close to Top 4 glory thanks to solid play throughout the tournament. (A tenth round concession from Phoenix Foundation, who had been annihilating everything in their path, was a considerable help as well.) Their opponents, I Thought You Quit, were so named because the members of the team hadn't been playing much competitive Magic of late. In fact, Seat A player Jeff Magid was heard to say that he hadn't played in the last year. It's a testament to his talent, then, that his squad was this close to taking it all.

The draft had been an interesting one. Turian was playing a black-blue build as a result of some metagame drafting out of the traditionally green Seat A. Magid would try to counter with a standard red-green configuration--big monsters, acceleration, and burn. Things started pretty much as quickly as humanly possible--both sides of the table had both a turn 1 and a turn 2 play. Magid came out with Goblin Taskmaster and Wirewood Herald, while Turian answered with Carrion Feeder, Dragon Shadow on the draw. 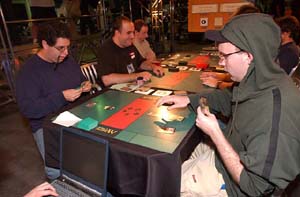 Magid sent for 2 and played a morph, and Turian was quick to answer by lovetapping Jeff right back for a deuce, though he couldn't use his mana on turn 3. Things really started to heat up on Jeff's fourth turn when the red-green mage dumped a Krosan Drover onto the table, threatening a massive body on the next turn. Mike's only rejoinder was to attack for yet another 2, and play his first morph of the match.

Magid threatened trickery on his next turn, attacking with everything, but when Turian blocked Drover with morph and coolly went down to 7 life, he didn't move to save his 2/2 Elf. Surprisingly, he could only follow up with Fierce Empath, searching out Wirewood Guardian.

Turian: "I was hoping you'd find something small. Like Treetop Scout."

Jeff passed the turn. Turian was able to buy himself a lot of time by playing a Noxious Ghoul on his own turn, eliminating Empath, Taskmaster, and Herald. Meanwhile, the Carrion Feeder, now a 3/2, continued to use Dragon Shadow to the fullest, knocking Magid to 11 life.

Suddenly disadvantaged, Jeff took some time to ponder his next turn. He decided to send the morph, and when Turian blocked with his Ghoul, Magid's hands went to his lands in a hurry.

It was, and Noxious Ghoul was the next to feed the Feeder, bringing it up to a 4/3 and putting Magid in imminent danger. Still, Mike would have to deal with the Lorian, and at 7 life it was a risky creature to leave around, especially considering the Torrent of Fire in Magid's deck.

As he decided how to play it, Eugene Harvey reported from two seats away that he had taken his first game. Moments later, Mike's other teammate Gary Wise also paused to deliver happy tidings of victorious joy, having rolled over Rabinowitz's double mulligan with relative ease. If Mike could win, all three members of Zabutan Nemonaut would be up a game!

Turian attacked with the Carrion Feeder to bring Magid to 7 life, and played a morph with a Swamp and an Island open. He used the mana on Jeff's turn, to cycle a Choking Tethers on the Treespring Lorian. Any hopes that the red-green mage had had of racing were doused for the time being--his job was now to stay alive long enough to kill Mike before the unblockable Feeder took it home. After a long deliberation, Magid tried his Wirewood Guardian.

Mike nodded and revealed his morph to be Soul Collector, which in tandem with the Feeder promised to hit for exactly 7 next turn, a number which, coincidentally enough, happened to be the same as Magid's life total. The "I Thought You Quit" A-Seat could only scoop. Zabutan Nemonaut were up a game in all three matches.

Magid came out fast in the second, with a Brigand, Empath opening against Turian's two land. While Jeff was searching his library, word came from the next table that Gary had dropped his second game, leaving his match with Rabinowitz at 1-1. Magid eventually decided on Enormous Baloth. Turian's first play of the game was a mystery 2/2 on the subsequent turn.

After a short deliberation on how to best use his mana, the red-green mage decided to send for 2 (with no blocks by Turian) and play his Krosan Drover, threatening a turn 5 Enormous Baloth. Mike's reply was to play an Aphetto Runecaster, which Magid had to read, drawing a chuckle from Gary Wise at the adjacent table.

Wise: "He's reading cards in the deciding match for Top 4!"

Magid: "No jokes Gary, I haven't played a game of Magic in about a year."

On Jeff's turn 5, the Brigand was forced to swing in, dying an honorable death to the mighty 2/3 Runecaster. Magid had no fifth land with which to cast his Baloth, and so he had to cycle for it. He had four cards in hand.

Jeff followed up the cycling with an Elvish Warrior and passed the turn. Turian did nothing of note on his fifth turn, passing it with oBoBoBoBoU open and a board of Runecaster and a morph.

While both players were going about the business of deciding the correct plays for Jeff Magid's sixth turn, word came down that the Harvey-Mandel match was over--Eugene had taken it in two on the strength of Dragon Scales and white Amplify creatures. The pressure was on Jeff Magid--a loss in this contest, and it would be over for I Thought You Quit. He must have figured it was time to get busy with the winning, because Enormous Baloth was his next play--pretty big. Turian unmorphed Soul Collector at end of turn, drawing himself a card.

Turian's turn was another morph with three mana to spare. His board was a 3/4, a 2/3, and a morph against the Baloth, Elvish Warrior, Krosan Drover, and Fierce Empath.

It was time for Jeff to go for the jugular. He aimed Torrent of Fire at the Soul Collector, and though Turian was able to save it with Echo Tracer (drawing a card in the process), doing so left the CMU Potato low on blocking options. Magid pounced on the opportunity, swinging with everything. The Fierce Empath died and so did the Drover, but Turian took 9, bringing him to a precarious 6 life. The turn was passed. Turian simply laid a land, replayed his Soul Collector facedown, and passed the turn again with three Swamps and an Island untapped.

Now came the most pivotal attack of the entire match. Flashing a potentially game-ending Wave of Indifference, Jeff Magid turned his Enormous Baloth and Elvish Warrior sideways in an attempt to end Turian's game 2 existance. Those who know and fear the Mighty Potato, however, know that he is not so easily defeated.

Turian flipped up his Soul Collector and drew a card.

At this, Mike had to object.

Using his only remaining blue mana, Mike Turian played an elbow-dropping Chain of Vapor, returning his own Echo Tracer and the murderous enemy 7/7. Magid's turn was derailed, and the next two were even worse for the Top 4 hopeful.

Turian wasted no time in blocking the Craghorn with his face-down Echo Tracer. His other morph still loomed ominously. He fell to 2, and used his own turn to play a land and attack for another 5, putting down a morph after combat with five mana to spare.

Magid could only swing in with his Elvish Warrior. When Turian double-blocked with morphs, Magid cycled Gempalm Strider and was obliterated when Turian flipped up Skinthinner to foil him, drawing a card in the process. From there, it was academic. Zabutan Nemonaut had made the Top 4, first in the Swiss!