Round 11:Relics Take On Vials

Last round was a very good one for Shouta Yasooka. With his victory over Martin Juza, Yasooka locked himself up a spot in the Top 4 tomorrow.

Paulo Vitor Damo da Rosa, on the other hand, was still sitting on the outside looking in, hoping to win his next two rounds to guarantee him a spot alongside Yasooka. Tensions were high as the matches went not timed for the final two rounds so that as many matches as possible could be shown on the live video. 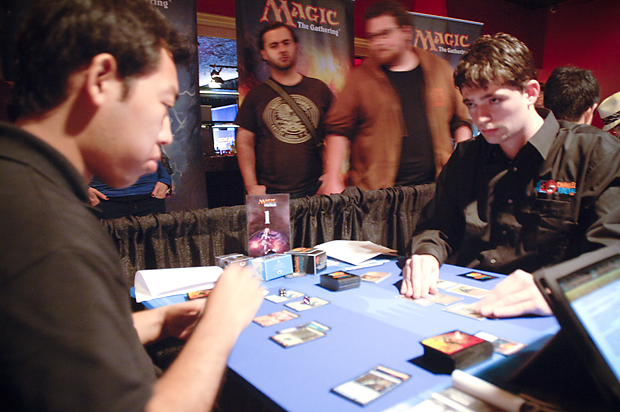 Paulo Vitor Damo da Rosa still had a shot at the Top 4. But there was one very big obstacle standing in his way: Shouta Yasooka.

These were the final elimination rounds, when the initial field would be quartered for the chance to play in the final day.

Damo da Rosa began the game by bolting himself, fetching a Temple Garden with an Arid Mesa to cast a Steppe Lynx. Yasooka used an actual Lightning Bolt to remove the Lynx before it could hit him. Damo da Rosa replaced it with a Tarmogoyf, slipping it in before Yasooka could Spell Snare it, a spell he instead aimed at a Qasali Pridemage on the next turn. Damo da Rosa's last contribution to the board was a Kird Ape, leaving him with two cards in hand.

Yasooka made a Vendilion Clique to start racing, revealing those last two cards to be lands, which he let Damo da Rosa keep. To keep the ground shored up, Yasooka added a pair of Tarmogoyfs to dominate the board. He began attacking with his whole team. Damo da Rosa lined his two blockers up in front of one of the Goyfs, trading his Kird Ape for the much larger attacker but falling to 5 in the process. 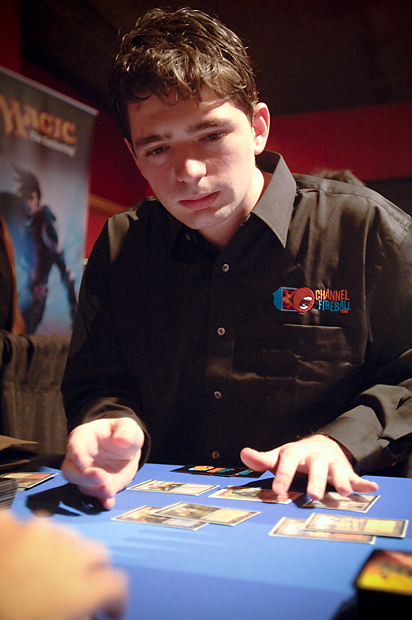 Damo da Rosa presses on with his Domain Zoo deck.

Damo da Rosa found a second Tarmogoyf, which he played to defend while the other attacked Yasooka to 10, but Yasooka had a Vapor Snag (along with a pair of Cryptic Commands in hand) to remove the blocker and leave the alley clear for the final attack.

Yasooka appeared to face a massively difficult decision as he peered at his opening draw for the second game of the match. After a bit of deliberation over a hand that held very little early interaction, he finally decided to throw it back, a wise decision against the aggressive Zoo deck. His next six contained an Æther Vial and some tricks, so he made an easy keep.

Unfortunately, he didn't have much defense for himself, and Damo da Rosa's draw was quite aggressive, using multiple fetch lands to build his mana as he smashed with a Steppe Lynx and Kird Ape. About the only truly beneficial thing he did during the early turns other than adding the Vial was to Mana Leak a Geist of Saint Traft, which would have truly broken the game open. When Damo da Rosa decided to play a Relic of Progenitus, always good against Yasooka's decks, the Japanese player decided to play a Snapcaster Mage to flash back his Mana Leak, which was as good as removed anyway. Damo da Rosa broke his last Scalding Tarn and fetched a Mountain, paying the three mana to keep it around. Yasooka blocked with his Snapcaster rather than take a horrendous amount of damage.

Unfortunately, his life total was already shredded and Damo da Rosa had an army of kittens ready to pounce next turn. Yasooka drew his card, didn't see a Cryptic Command to give him yet another chance to get back into things, and he packed it in, giving Damo da Rosa one final game to keep his hopes of Top 4 alive.

Both players kept their openers for the final game. Yasooka was on the play with an Æther Vial, an enviable position. Damo da Rosa had to go old-fashioned, actually paying mana to cast his cards, though they were very cheap. He made a Kird Ape and a Relic of Progenitus before Yasooka reached two counters on his Vial, allowing him to cast everything that really matters. Damo da Rosa attacked with his Ape and Yasooka had a chance to Vial in a Tarmogoyf, but it was only a 1/2 and would't have been able to block. Instead, he decided to simply Lightning Bolt the second Kird Ape Damo da Rosa played and Vial in the Goyf after combat. He added a second to his team a turn later.

Damo da Rosa was wisely using his Relic of Progenitus, paring his own graveyard to make sure that the Goyfs were as small as possible. When he was presented with the opportunity, he sacrificed it to clear both graveyards, allowing his Kird Ape to kill an attacking Tarmogoyf. After combat, Yasooka began to rebuild his graveyard and his Goyf's by proxy. He also added a third counter to his Vial, indicating a Vendilion Clique or Eternal Witness in the future. He used Combust to kill the Loam Lion that Damo da Rosa played, keeping himself at a slight advantage. 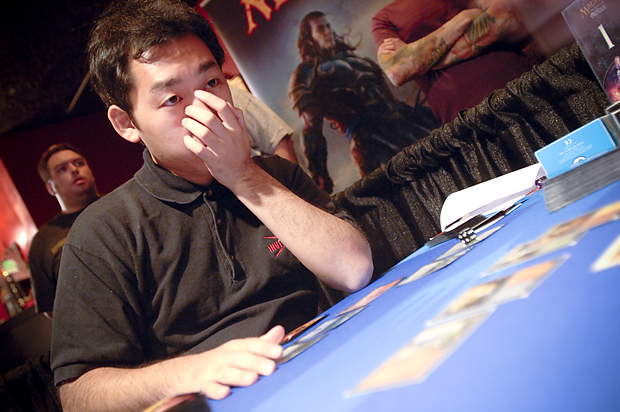 Yasooka has an active Æther Vial, but playing against the graveyard-hating Relic of Progenitus can be tense.

Damo da Rosa took the advantage back, adding a Steppe Lynx to his side, which forced Yasooka to keep his Goyf at home. Yasooka ticked his Vial up to four counters, the threat of something stellar looming in the future. When Damo da Rosa attempted a Relic of Progenitus that would have broken Yasooka, the Japanese player was forced to Mana Leak it.

Neither player was in a particularly advantageous situation, life totals at 13 apiece, both with nearly the same number of cards in hand, and neither really able to attack profitably. Things got interesting when Yasooka threw a Vendilion Clique at Damo da Rosa's hand, seeing a pair of Lightning Helixes, a Tarmogoyf, a Geist of Saint Traft, and a Thrun, the Last Troll. He cycled away a Lightning Helix and began to attack on the next turn. Damo da Rosa had a pair of Kird Apes and a Steppe Lynx, and he decided to try and block Yasooka's Goyf with a Lynx and Lightning Helix it, but Yasooka had a Spell Snare to stop it.

With his Vial on four counters, Yasooka was able to flash in a Glen Elendra Archmage, giving him a cheap way to protect his side, as well as a second flying attacker. He bashed Damo da Rosa down to 4. Able to see that Yasooka had a Cryptic Command in his hand, the game appeared to be over from my seat. Damo da Rosa thought for a minute before sending his recently cast Tarmogoyf and a Kird Ape over to knock Yasooka from his pedestal at 11 life. Yasooka took 2, blocking the Goyf with his own. He then untapped, showed Damo da Rosa a Lightning Bolt, and handshaking ensued. Damo da Rosa had no way to stop both of Yasooka's fliers, likely knocking him out of contention for the Top 4.