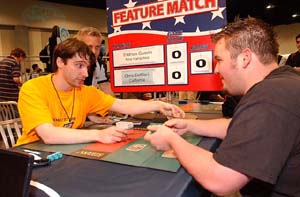 This match was for Top 8. Tom Guevin has been on the Pro Tour since it started, and even came in the finals at the second Pro Tour. He couldn't even remember his last top finish when asked. Chris DeMaci got into Nationals through a grinder, and made a Top 8 back in Grand Prix - Phoenix a while back. The crowd is mostly behind him, since he's a hometown California player.

DeMaci opened with City of Brass and Llanowar Elves. Turn two, Cabal Therapy was cast, naming Smother. It hit one, leaving Guevin with Graveborn Muse, double Nantuko Shade, Withered Wretch and land. DeMaci summoned Wirewood Herald and sacrificed it to flash back Cabal Therapy, getting both Shades out of Guevin's hand. Once this happened, an argument started, since the Therapy had already resolved and DeMaci hadn't searched for another Elf, which he technically needs to do before the Therapy's effect resolves. His argument was that he declared he was activating the Herald, even though he did the effects in the wrong order.

After a long judge meeting, it was decided that DeMaci would get a warning, but would be allowed to search out an Elf, which was Wirewood Herald. Guevin simply shook his head in disbelief at the ruling, taking a few deep breaths. After he composed himself, the game started to slowly take a turn for the worst, with both players sniping at each other. Guevin untapped and played Duress, taking Smother out of DeMaci's hand, leaving him with Smother, Caller of the Claw and Wirewood Herald. Llanowar Elf attacked for a point, and was joined by the Herald. Guevin summoned Withered Wretch, and it died to Smother, clearing the way for another Elf attack. DeMaci then played Birds of Paradise, and ended his turn.

Guevin tapped out for Graveborn Muse, and DeMaci drew, thought for a bit, and said go without doing anything. The Muse got to work giving Guevin an extra card, and his side improved more with Rotlung Reanimator. DeMaci simply played a Llanowar Elf, and did nothing else. This time, Guevin drew two extra cards since he had two Zombies in play, and cast Cabal Therapy. In response, DeMaci played Caller of the Claw, then used Smother to kill the Rotlung. Stronghold Assassin gave Guevin even more dominance over the board, and Unholy Grotto put the Rotlung on top of the library, and back into play.

Faceless Butcher targeted Wirewood Herald, and was sacrificed to the Assassin when the effect went on the stack, making sure the Herald stayed out of play and killing the Caller. DeMaci used Living Wish to search up Phantom Centaur, and put it right into play. Guevin drew four cards and gave DeMaci a long, hard stare, then almost violently shoved all his creatures into the Red Zone, declaring "ALL IN!" DeMaci started to think about how to block, wondering out loud if Guevin had Corrupt. The "ALL IN" declaration particularly irritated him, and he started asking if Guevin felt like a bigger man for it. Guevin- "I've always wondered how Kai stuck a card to his forehead."

After a few moments, Guevin revealed the Corrupt in his hand, showing that he had just been toying with DeMaci.

DeMaci opened with Llanowar Elves, and Guevin played Withered Wretch, which was Smothered.

DeMaci- "You knew I was going to do that!"
Guevin- "I know what all my opponents do before they do it."
DeMaci- "Wow! Hey, make sure you write that quote down!"

DeMaci summoned Ravenous Baloth, sarcastically asking, "Hey did you know I was going to do that too?" Guevin started to take his turn, and DeMaci joking mentioned that he had never actually said he was done. Guevin played Rotlung Reanimator, and both players kept throwing insults back and forth, with DeMaci calling Guevin a "class act", and acting sarcastically self-loathing about what a bad player he is.

DeMaci played Engineered Plague on Zombies, sarcastically turning to me and the judge, and making sure we noted that he called "Zombies" and asking Guevin if he should "write it down somewhere." Chainer's Edict took care of the Baloth, but not before DeMaci gained four life. He played Birds of Paradise, then Llanowar Elves.

At this point, Guevin asked the judge to watch for unsportsmanlike conduct, which got no reaction. The Zombie token was Smothered, clearing the way for an Elf attack. Guevin summoned Graveborn Muse, and cast Cabal Therapy a turn later, naming Caller of the Claw (he only saw Smother and a land). DeMaci's deck was out of fuel, and Graveborn Muse drew Guevin into a Corrupt. On the next turn, DeMaci asked "Do you have another Corrupt?" and Guevin strongly responded with, "Actually I have two."

Guevin- "You got me! But I got the match, so it doesn't matter."