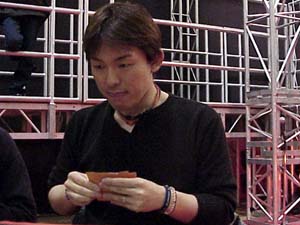 soon as I sat down, Dirk mentioned that Ikeda was his eighth red opponent, and that he had only played against Affinity once.

"That's my good matchup, in case you were wondering."

Ikeda mulliganed down to five, and played a first turn Pyrite Spellbomb. Baberowski played a Cloudpost, then a Talisman and a Chromatic Sphere. Solemn Simalucrum hit play on turn three, and Ikeda played one of his own. They traded in combat, and Baberowski played another, along with a Pyrite Spellbomb. Ikeda tapped out for Arc-Slogger, and on end step Baberowski cycled the Spellbomb. Baberowski played his second Blinkmoth Nexus, and attacked with his first, along with the Simulacrum. Ikeda didn't block, and took three damage. Baberowski played another Simulacrum, which died to a Viridian Shaman. The Slogger got through for damage, and Baberowski swung back with his Nexuses before playing his fourth Simulacrum of the game. Oxidize and Electrostatic Bolt took out both of the copies on the table, and Ikeda attacked with his Shaman and Slogger. Baberowski activated his Nexus, but Ikeda Oxidized it before blockers could be declared. To slow things down a bit, Baberowski bolted the Shaman, but still took four and went down to twelve.

Fireball took down the Slogger, although it was able to shoot Baberowski three times before it headed to the graveyard. Baberowski attacked with his Nexuses, and Ikeda destroyed a Talisman with Viridian Shaman. At six life, it seemed that Baberowski was a burn spell or two away from death, but as it turned out, the exact opposite was true. Thanks to his Cloudposts, Baberowski was able to deal exactly twelve damage with Fireball to win.

Both players had turn four Simulacrums, and Baberowski's died to Viridian Shaman to clear the way for an attack. Baberowski played an Arc-Slogger with one red mana open, and it died to Shrapnel Blast as Ikeda attacked with his team to deal four more damage. Baberowski had another Slogger, but Ikeda had another Shrapnel Blast, this time sacrificing the Simulacrum. Before it died, it shot down the Shaman and dealt two damage to Ikeda. Another Shaman came out, this time with no target. Thanks to two Cloudposts, Baberowski was able to summon Furnace Dragon, which didn't have any artifacts to remove when it came out but was still a large flying 5/5 body. Ikeda cast Journey of Discovery to put two lands into his hand, and ended his turn. It seemed that the game was all but over, as Baberowski targeted Ikeda with a Fireball for nine, which would have put Ikeda on one turn to live with the Dragon around. However, it was sent back to Baberowski with Shunt, bringing him to five where Ikeda's own Fireball did the rest.

Baberowski - "My first four Japanese players didn't have Shunt in their deck. Are you playing the same thing?"
Ikeda- "No, not the same deck." 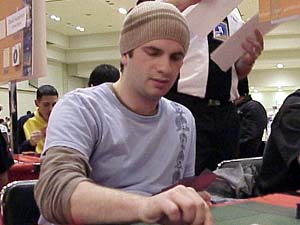 Ikeda mulliganed down to six, but still played a third turn Simulacrum off a Talisman. Baberowski played one of his own, and Ikeda got more lands with Journey of Discovery. He had enough mana left to play a Shaman, killing the Simulacrum. Baberowski summoned Arc-Slogger, and Ikeda sacrificed his Simulacrum to Shrapnel Blast to kill it. A shot in response killed the Shaman to bring the board back to even, but Ikeda pulled ahead with his own Slogger. Baberowski answered back with a Fireball to kill it, and cast Detonate to destroy one of Ikeda's lands. Ikeda played a Simulacrum, and Baberowski attacked with two Nexuses in the air. The Simulacrum swung back for two, and Ikeda played a Shaman to destroy a Talisman. Baberowski played a Spellbomb and cycled it, then played another. On end step, Ikeda sacrificed the Simulacrum to Shrapnel Blast to deal five damage to Baberowski. He then untapped, and used Fireball to deal seven damage, bringing Baberowski to six. Furnace Dragon wasn't too impressive as Baberowski seemed certain Ikeda had a burn spell, and he indeed had another Fireball to take the match.