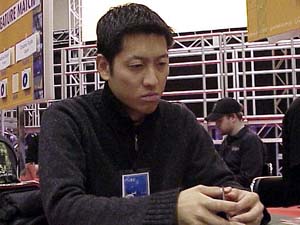 Kuroda's dubious claim to fame is four premier level events with perfect Day One records followed by spectacularly fiery crash and burn finishes. After going 8-0 yesterday he had a few matches to give today to remain within spitting distance of the Top 8. After three rounds he had to be getting that old familiar feeling with an unimpressive 1-2 record on the day. Kuroda was playing Big Red, a deck which sported plenty of Affinity hatred and burn. After the first game he also had Furnace Dragons which put him as the heavy favorite to reverse his losing ways this round.

Ben Stark has also had a couple of perfect Day One records recently. He went 8-0 at both GP Kansas City and GP Anaheim. He finished in the Top 8 of both events. Ben is considered to be one of the finest American players in the game today. He was playing Ravager Affinity and his deck had no good answer to a Furnace Dragon--what Affinity deck does after all? Ben was 3-0 on the day so far after a solid if not spectacular 6-2 start.

Ben lost the die roll and asked his opponent hoping for an unexpected answer, "Going first? The Japanese player smiled and led off with a Mountain. Ben led off with the indestructible Darksteel Citadel and played Chromatic Sphere, Welding Jar, and Ornithopter.
All Kuroda had for turn two was a second Mountain. Ben's turn two on the other hand was explosive. Neil Reeves was playing Dave Humpherys at the next table and he was feeling snubbed by the absence of a reporter at his table. "Why aren't you covering us? We're much more interesting."

Ben smiled as he began to play his cards. He played two Frogmites and turned to Neil, showing off his board, "He wanted to cover this draw. Turn two Myr Enforcer." Ben then drew three cards with Thoughtcast off the Sphere. Kuroda killed the Enforcer with a Bolt. Ben still had four cards.

On his own turn, Kuroda used Barbed Lightning to kill a Frogmite. Ben seemed a little concerned that he had spoken too soon, "You're doing a pretty god job of controlling this draw."

Ben attacked with Frogmite and made it three points of damage with a Tooth of Chiss-Goria. The second main phase saw a Disciple of the Vault and a Ravager hit play. Kuroda Detonated the Ravager and Ben had to consider his next play and considered eating all of his lands to the Ravager to give one of his creatures +4/+4 and tack on some Disciple damage. "This is probably going to be awful since you will just Shatter my guy on the next turn but these lands aren't doing anything for me right now so…"
Ben ate all the lands and Ornithopter and Kuroda fell to twelve. He fell to three on the attack and scooped it up next turn.

Ben followed Kuroda's lead-off Mountain with a Darksteel Citadel, Arcbound Worker and Scale of Chiss-Goria. When Ben played the Scale his opponent responded by Bolting the Worker. Ben used the Welding Jar to save it.

Kuroda untapped and Detonated the Worker. Ben shrugged and played a Frogmite which Kuroda promptly Echoing Ruined on his next turn. Ben came back with a Disciple of the Vault and got in for one.

Ben cycled a Chromatic Sphere and burned for one when he guessed wrong on the mana and drew another Disciple. "It's always a guessing game--blue or black?" He had previously played a Genesis Chamber.

Ben could not attack with his Disciples because Kuroda had an untapped Blinkmoth Nexus. The Japanese player made an Arc-Slogger and passed the turn with one red up. Ben played a Skullclamp and Terrored the Slogger and one of his Disciples fell to the beast's ability.

Kuroda attacked for one with his token from the Genesis Chamber and then played a Furnace Dragon leaving Ben with only a Disciple. "Okay." They were on to the deciding game.

Kuroda was clearly feeling the pressure of his past finishes. He held a clenched fist in front of his face and tried to maintain his composure. He sighed and put his head in his hands and hoped for a good draw. Ben may have unwittingly relaxed his opponent when he kidded with the Japanese player about whether he would play or draw. "I'll play…shocking, right? Nobody ever draws."

Ben debated the merits of his opening hand. He had only one land and no creatures. He did have Oxidize and Terror but his land was a Seat of the Synod. Finally he decided to mulligan, "If there wasn't one stupid card in that hand it was such an easier decision." He saw Skullclamp, mana, and creatures sitting in his next six and quickly announced he was keeping. Kuroda did the same.

Ben led off with Skullclamp and played a Frogmite on the second turn. Kuroda played a Talisman. Ben dug two deep with a Thoughtcast and Clamped his Frogmite and attacked for three. Kuroda had the Solemn Simulacrum on the next turn and ramped to five mana on turn three.

Ben played another Skullclamp and drew four cards off of his Frogmite. He used Glimmervoid to Oxidize the Talisman and played an Arcbound Worker with a full grip to work with next turn. Kuroda played a Blinkmoth Nexus. He was holding a pair of Talismans, Arc-Slogger and an Electrostatic Bolt. The Jens got in for two points of damage and he played out his two Talismans. Ben cast Thoughtcast on his turn and even after playing a Seat of the Synod still had what seemed like infinite cards. He played a Somber Hoverguard and a Myr Enforcer and passed the turn with plenty of action still in hand.

Kuroda looked pained by Ben's board but Stark wasn't buying it, "C'mon …you know you are dragoning next turn."

Kuroda played Arc-Slogger and Ben nodded, "Cool." He cast Thirst for Knowledge EOT and Kuroda considered his plays. He let it resolve with no effects. Ben pitched a Tree of Tales.

Ben went to equip his Worker and Kuroda put his hand up before Ben could draw any cards. Ben nodded, "I know, I know." Kuroda shot the Worker in response with the Slogger and milled past two Furnace Dragons to the delight of the American. "Two Dragons down."

Ben attacked with his flier and waited to see if Kuroda would trade his Nexus for it. Finally he decided not to block and took three. Ben equipped the Enforcer after combat and similarly equipped the Hoverguard. Kuroda responded by killing the Hoverguard with his Slogger. Ben cheered on Kuroda's deck, "Two more dragons c'mon." Kuroda only milled past one but Ben still brightened when it went by.

Kuroda was holding an Electrostatic Bolt and Fireball. He attempted to kill the Enforcer but Ben played a Scale of Chiss-Goria and used it. Kuroda then finished the Enforcer off with his Slogger. He activated his Blinkmoth and attacked for seven. Ben fell to eleven. The American cast Thirst for Knowledge at the end of the turn.

He untapped and played a Myr Enforcer and an Arcbound Ravager. He followed with Frogmite and double equipped the Myr Enforcer and sacrificed it to the Ravager to draw four cards. When he turned the action over to the Japanese player Kuroda apologized, "I am thinking." He counted his library and checked through his removed from game pile. The judge admonished him and asked for speedier play.

Kuroda apologized again and went to his turn with no action. He was still hesitant but eventually Echoing Ruined the Ravager. Ben saved it with a Welding Jar but the creature tapped leaving only Frogmite to guard the gates. A huge gaggle of Japanese fans gathered along the rail to watch the 'action' and admonished anyone in the feature area who obscured their view of the game.

Finally Kuroda attacked with the Slogger and left the Jens in the defensive position. He also had the mana to attack with his Blinkmoth Nexus but chose to keep it in reserve. Now it was Ben's turn for reflection. He was holding seven cards but they would do him no good if he died. He was similarly admonished by the judge but Ben was adamant. "I have been playing really fast. This is very difficult. Besides this game isn't going to last more than two turns one way or the other."

Ben sacrificed one of Skullclamps to the Ravager and then the Ravager to his Frogmite to make it a 5/5 blocker. Kuroda put damage on the stack and shot Ben before his beast died. Ben fell to nine.

The American used Thoughtcast. He played a Ravager and then another. He passed the turn to Kuroda. Who was one point shy of being able to kill him with Fireball. Had he attacked last turn with Blinkmoth Nexus he would have had enough. He attacked with the Jens hoping one of two things would happen. Either the Jens would die and he would draw one of the four remaining cards in his deck--three of which were the land he needed. The other option was that the Ravager would die and he would not be facing a lethal attack next turn. He did not see a third option. Ben blocked with a Ravager and saved Kuroda's Jens with his Scale. He also saved his Ravager after damage was on the stack.

Kuroda played another Solemn Simulacrum and sent the play back to the American. Time was called and Ben tried to talk his way through the situation. He had three attackers and Kuroda had two blockers with only one card in hand. "Why would you attack unless you had an answer? Unless you didn't think I would Scale your guy. I know you have a Fireball left somewhere so I think I have to go for it." 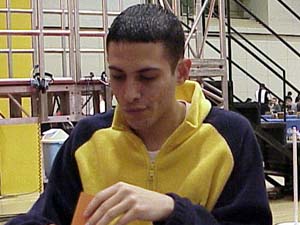 Ben played out a bunch of artifacts and ran through the permutations, "Definitely lethal."

Ben attacked and Kuroda made his Blinkmoth a critter. He contemplated his blocks. Ben tried to get the match over with--one way or the other, "I am going to try and kill you. If you have the bullet just use it and speed things up." Kuroda remained stoic and blocked the two Ravagers letting the Frogmite through. Ben began eating his things and made a 14/14. Kuroda was of course holding the Fireball and slumped in defeat.