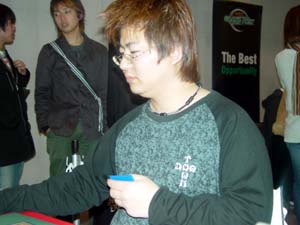 be honest here. A lot of the time, someone unexpected has a really good day one, especially at a limited Grand Prix. We hype him up and speculate that he's going to live out the impossible dream and make Top 8, but that often doesn't happen. Why? It's easy for some random guy to get a broken sealed deck and go undefeated, but it's far harder to draft well. Hiroto Yasutomi is not that random guy. He went 2-1 in his first pod today, and is in prime position to make Top 8 and make a great deal of money from both the amateur prize bonus and the main payout.

In his way this round, however, is "The Last Emperor" Jin Okamoto. If you're Yasutomi, this is not the guy you want to play when you're aiming for your first big tournament accomplishment. To make matters worse, Okamoto has Pentavus, Solar Tide and Betrayal of Flesh.

Okamoto mulliganed down to six. Yasutomi played an Alpha Myr, and Okamoto summoned Emissary of Despair. The Myr came through for two damage, and was joined by a Soldier Replica. The Emissary attacked for two, and Okamoto gained two life. Whispersilk Cloak made the threat even better, but Yasutomi had the perfect answer in Pearl Shard. This kept the Emissary back, and Okamoto played Skeleton Shard, lacking a black mana source. Thanks to the Shard, Yasutomi's team was able to attack past the Emissary, and Auriok Glaivemaster added a little more pressure to the board. Okamoto played Loxodon Mystic and went to move the Cloak to it, but Yasutomi responded by casting Blinding Beam with entwine. This let him force through plenty of damage, and a second Beam was more than enough to take care of the rest.

Both players started with evasion creatures on turn three- Okamoto with the Emissary, and Yasutomi with Neurok Spy. Okamoto attacked for two, and played Pteron Ghost along with Iron Myr. Bonesplitter went on the Spy, and the race was on. Okamoto cracked back for four, gaining a life in the process. On top of that, he played Skeleton Shard. The Spy dealt four more damage, and Yasutomi missed his third land drop. Lacking options and not wanting to fall behind in tempo too much, he cast Blinding Beam to keep Okamoto's creatures tapped for a turn. Okamoto just played a Soldier Replica and ended his turn, while Yasutomi found a fourth land and played Skyhunter Patrol. Okamoto's Replica would seem to be a problem, since he had Skeleton Shard out and could shoot down Yasutomi's creatures at will when they went into combat. He tried to deal three to the Spy, but Yasutomi saved it with Test of Faith, and made it a massive threat in the process. Awe Strike set things back a little, and Okamoto got back the Soldier Replica.

Without any other way to deal with the problem, Okamoto cast Solar Tide on bigger creatures, which killed the Spy. This gave him a little more breathing room, and allowed him to attack with the Ghost and the Emissary, which only provided one life since Yasutomi just had a Bonesplitter. It went on the Patrol and it attacked for four, then Yasutomi played Arcbound Bruiser. Okamoto's Pentavus was easily stopped by Arrest while he was tapped out, and Pulse of the Fields kept Yasutomi in the game while his Patrol and Bruiser attacked for seven. Okamoto counterattacked, and brought out the Replica once again. This time, Yasutomi didn't have a Test of Faith or any other trick to save his creatures, and was forced to stay back.

This brought the game to a stalemate, but gave Okamoto the opportunity to pull ahead, as he played Pewter Golem. Okamoto mana burned to put the Pulse out of range for coming back to Yasutomi's hand, and a second Blinding Beam tapped down his Emissary and Ghost. This left Okamoto with no untapped fliers to block, and with only Soldier Replica as an answer. Yasutomi was looking for an out to force the Patrol past the Replica, as he drew his next card hoping it would be what he was looking for. It wasn't, and Okamoto used Terror to kill the Patrol and Yasutomi's last hope.

Once again, Okamoto mulliganed down to six. He played Pteron Ghost, and Yasutomi had Neurok Prodigy. The Ghost got through for a point, and Okamoto played the Emissary. The Prodigy got past it for two damage, and Yasutomi played Drill-Skimmer. The Emissary came through for damage, and Okamoto played a Skyhunter Cub. Yasutomi cast Blinding Beam with entwine to tap down Okamoto's creatures, and attacked for four before playing Auriok Glaivemaster. The following attack was for five, and Yasutomi kept the pressure coming with Steelshaper Apprentice. Okamoto swung back with his team, dealing five and gaining one off the Emissary. He then cast Solar Tide, wiping all the creatures off the board. He had been setting up for it and had Pentavus ready to charge onto the empty battlefield, but Yasutomi used Altar's Light to deal with it. 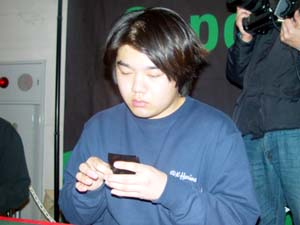 Okamoto played Frogmite, but Yasutomi was able to recover a little better, playing Arcbound Bruiser and giving it a Bonesplitter. Frogmite blocked it, and became 5/5 thanks to Test of Faith. Yasutomi played Viridian Longbow, and put it on the Bruiser. Okamoto attacked for five with the Frogmite, and the Bruiser came right back for five. Thanks to a Morningstar, Okamoto made his Frogmite 7/7, which was good enough to win the race.