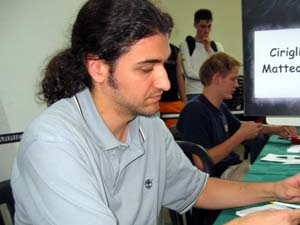 Cirigliano had to send his first hand back. They played "land go" for quite a while, until Manuel played a turn five Oblivion Stone. Matteo used Thirst for Knowledge to draw extra cards and passed the turn back.

When the Swiss tried Solemn Simulacrum, the Italian showed him Condescend. He got his Thirst back with Eternal Witness. The Swiss thought that was a good idea and played his own Witness to get Thoren back.

Viridian Shaman came out to blow the Stone but Bucher blew it himself to see some cards with Tel-Jilad Justice. Sylvan Scrying gave him his second Cloudpost.

Matteo sent his crew in and the Witness traded. They both played Solemn Simulacrums and went back to staring at each other accross the table. Bucher resolved Oblivion Stone, after Matteo stared at his hand for a few seconds.

The Crystal Shard in his hand wasn't as useful with the Stone on the table. He attacked and traded his Shaman for the Thoren. Another Scrying gave Bucher his third Cloudpost.

The Stalking Stones came to life and blocked the Italian Thoren. Bucher attacked with it and tried Mindslaver. A huge Condescend stopped it. With his opponent now tapped out the young Swiss unleashed a entwined Tooth and Nail. Out came two Eternal Witness returning the Mindslaver and Oblivion Stone.

The Swiss tried a second turn Sylvan Scrying but Condescend put an end to that. Or tried to, because on the next turn Eternal Witness brought the spell back. Matteo played Troll Astetic and tried to speed things along. He knew in the long game he would have trouble controlling Bucher's massive spells.

Next he tried Solemn Simulacrum. Annul stopped that. Hiding behind his Troll Cirigliano used Eternal Witness to get his Condescend back. Bucher baited it out with Reap and Sow and the Italian was happy to oblige.

A Viridian Shaman resolved and traded with the Witness. By now the Troll Astetic had Bucher at six. He tried a Reap and Sow and when Matteo Cirigliano showed him Last Word he made the following comment:

Again the Swiss played turn three Oblivion Stone and again the Italian answered with Thirst for Knowledge. Condescend stopped Reap and Sow and Bucher was stuck on four lands.

Matteo risked Troll Astetic and the Swiss found his fifth land. He blew up the Stone but Cirigliano had Echoing Truth to save his amazing creature. The Troll came back, and Manuel played another Oblivion Stone.

Again, Bucher's mana fail him. He was still at five. He blew the Stone and tried Eternal Witness. Last Word put an end to that plan.

The Troll Astetic kept on pounding, while Matteo battled to keep any blocker out of the way. Manuel tried Duplicant next and again Matteo had an answer: Condescend. 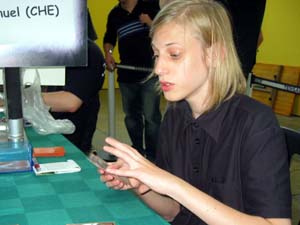 he was four turns away from riding the Troll all the way. Bucher found another land and tried Triskelion. Matteo had Annul. The Swiss went to five. He tried Plated Slagwurm, and the Italian had ANOTHER Condescend.

The Troll marched in, Manuel fell to two. Manuel Bucher had one last chance: he tried an entwined Tooth and Nail. Obviously Matteo had Condescend. Obviously.

Matteo 2-1 Manuel. Matteo Cirigliano is one match win away from the Perfect Swiss.