Round 12: Adam Prosak vs. Josh Shroll 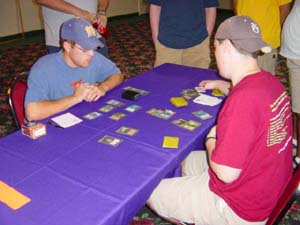 Two relatively unknown players were at the top of the standings, both playing blue/green. The winner would certainly have a good chance at the Top 8 today. Adam Prosak's best tournament finish so far has been top 8 at the Ohio Regional's and 22nd at Nationals, and while Josh Shroll learned the game a while ago, he has only been playing competitively for six months.

Josh started the game with a double mulligan and led with double Cephalid Colesium and an Aquameoba which was met with Adam's Catalyst stone. Josh was able to pitch Wonder in the grave as he attacked. The next time Josh played an Island all his men would gain flying. Josh was able to cast Standstill. With Wonder in the graveyard, Adam would probably have to break the Standstill.

In the blue/green vs. blue/green matchup, if one player gets Wonder and the other doesn't it's a huge advantage, perhaps even enough to make up for a horrible double mulligan and double Cephalid Coliseum/painland start by Josh. Adam was forced to break the Standstill with Mental Note, and he made a wry comment about breaking the Standstill and giving Josh three cards with such a weak card. Adam followed it up with Quiet Speculation, and filled his graveyard with Roar of the Wurm and then cast one of them.

Josh played his first basic land, a forest, Aether Burst the Wurm, and attacked. 11 to 15 life points in Josh's favor. Josh also made a Basking Rootwalla. On Adam's turn was forced to hard cast Wonder, having no way to pitch it into the grave, and Josh had yet another Aether Burst. It looked like Josh would be able to win this race now. Josh attacked and on Adam's turn he hard cast Wonder yet again, and then made another Wurm token from the graveyard. 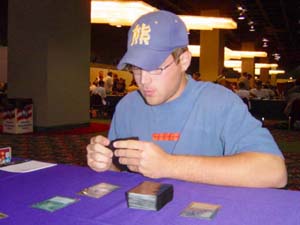 On Adam's next turn he attacked and put the life score 3-4, and then cast Grizzly Fate, tokens which now having flying were able to foil Josh's next all out attack, giving Adam the win.

Game 2 was brutal. Let me tell you Josh's game: Turn 2 Aquameoba. Turn 3 madness Arrogant Wurm, and attack with Aquameoba. Turn 4 make another guy, attack. Turn 5, pitch Wonder kill you. Adam cast three or four spells that game, pretending to fight back as he got stomped into dust. 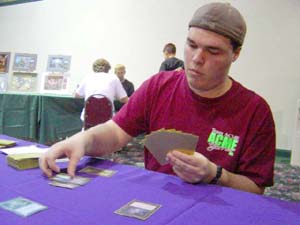 Game 3 Tim Aten walked up next to Josh to observe the match. Adam commented how bad luck Tim was. Sure enough, a double mulligan on Josh's side and a few turns later the game looked like: Josh with 1 creature in play, 4 lands, and a Moment's Peace and a couple other cards in the graveyard, while Adam had two Wild Mongrels, a Werebear with Threshold, five lands in play, Wonder in the graveyard and some Roar of the Wurms in the graveyard. In a couple of turns, Adam was able to maul his opponent, taking advantage of a double mulligan and being able to go first to attack for the win.

In the end, it all turned on that one single error Josh made in the first game. In this block format, especially blue/green on blue/green it's so often whoever wins the die roll to go first or whoever gets Wonder that wins, so it becomes even more critical to try to win the one game in the match where you can outplay your opponent.