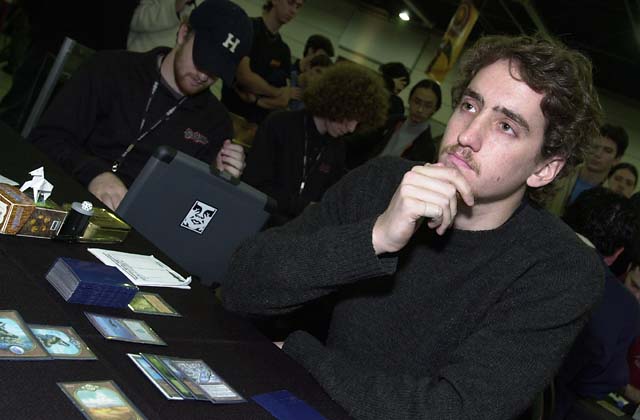 This was the last round of the Swiss portion of the tournament, but these two were in a tricky limbo. They definitely could not advance without a win, but their tiebreakers were borderline. Adrian is playing a unique deck that uses many mana producing green creatures in conjunction with the Orb/Opposition combo. Plus, he even has Rising Waters, which shuts down his opponents and barely matters to him thanks to his non-land mana sources. Dawton is playing Meddling Rebels, which has to be considered the favored deck in this matchup. Meddling Mage by itself can shut down Adrian's combo, and Dawton can use Dismantling Blow to take out any threatening enchantments. However, the Rebels strategy is crippled by Rising Waters, which means it will be a key card for Adrian if he hopes to win.

Dawton played first, and Adrian opened with a Birds of Paradise. Dawton cast Brainstorm during the end step. He then played a plains and Meddling Mage, naming Opposition. Adrian then played Duress, causing Dawton to lose an Abosrb. He used the remaining two mana to summon Utopia Tree. Meddling Mage attacked for two, and was joined by a Defiant Falcon. Adrian now played a very key Rising Waters. Rebels cannot search efficiently when only one land untaps per turn, and Adrian's Bird and Tree helped him to work around the Waters rather easily.

Regardless, the Mage and Falcon continued to attack for damage. Adrian played yet another mana producing creature: Vine Trellis. That was enough to stop the Mage, and only the Falcon attacked on Dawton's turn. He used Dismantling Blow on Adrian's end step to destroy the Rising Waters. This allowed him to untap, and get to the task of searching out Rebels. Dawton summoned a second Meddling Mage, naming Static Orb. With his combo shut down, Adrian went into beatdown mode and played Nemata Grove Guardian. The Falcon searched out Lin Sivvi on end step. On the next turn, Sivvi went up the chain to get Ramosian Sky Marshal. 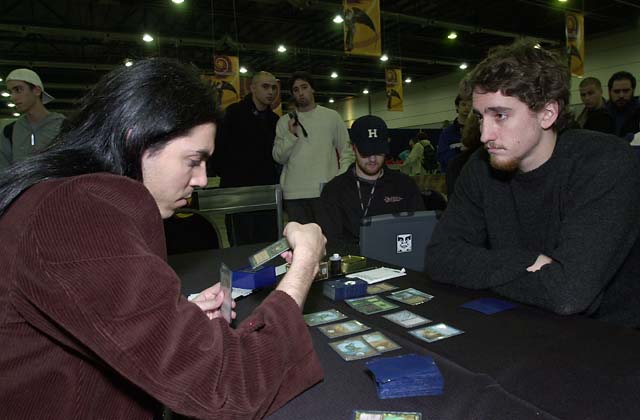 The flying Rebels flew through the air for damage, and Adrian made some Saprolings on end step. Defiant Vanguard was searched out next, ensuring that the Nemata wouldn't attack anytime soon. After Dawton's next turn, Adrian generated more Saprolings, while Sivvi searched out a Lieutenant on end step, and a Vanguard searched out a second Vanguard. Dawton untapped and played Parallax Wave, prompting Adrian to concede.

Adrian played first this game, and summoned a Utopia Tree on Turn 2. Dawton had a play of his own, as he cast Meddling Mage and named Opposition. Adrian then tapped out to play Rising Waters. The following turn saw him build up his non-land mana sources with Vine Trellis, which also stopped the Meddling Mage beatdown. Lin Sivvi was played by Dawton afterwards. Adrian continued to deprive Dawton of resources with the help of Tangle Wire. Dawton searched on upkeep, fetching Defiant Falcon. A third mana producing creature was played by Adrian in Quirion Elves, which was set to produce blue mana.

Static Orb was played by Adrian on the following turn, but Dawton was ready with Counterspell. With Tangle Wire fading away, Dawton started to get to work in the damage department, sending Meddling Mage into the Red Zone. Adrian then swung back with his Quirion Elves. Dawton now Disenchanted the Static Orb and untapped, ready to search out a Rebel army. Meanwhile, Adrian summoned a Squirrel Wrangler. During the end step, Lin Sivvi searched out a Sky Marshal. It attacked along with a Falcon on the next turn, and Dawton followed up with Parallax Wave. During the end step, Adrian activated Squirrel Wrangler twice to get four Squirrels. It was tucked away with Parallax Wave. 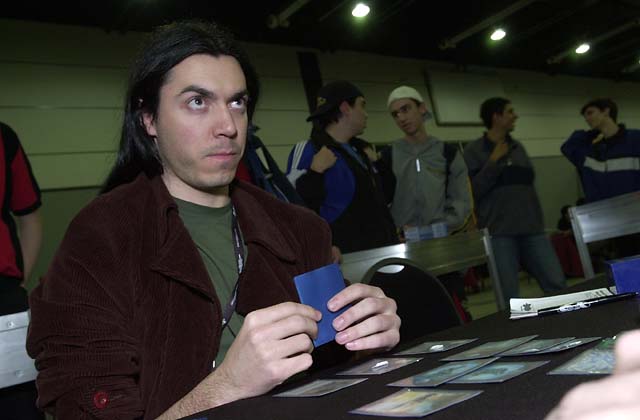 Still, Adrian had no answer to the four points of damage that continued to attack through the sky. Attacking through the ground wasn't much of an option, since Dawton's Rebel forces continued to increase. Adrian realized he could not win in this position, and conceded.