Round 12: Alan Comer vs. Diego Ostrovich 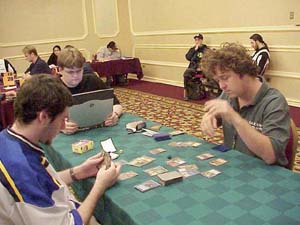 The game started off relatively fast with Comer Icing Diego's Island during his upkeep, and then playing a Goblin Trenches on Turn 3, a rather aggressive move for Comer's slow Control deck. During Comer's end step on Turn 4, Ostrovich played a Worldly Counsel for 3, and after that resolved Comer played a Fact or Fiction, revealing Prophetic Bolt, 2 Fire/Ice, Absorb, and Plains. Alan took the Absorb, Fire/Ice, and Plains, and then Diego just played a land and said go. Comer also played a land and ended his turn, and Diego attempted to cast a Fact or Fiction, but Comer had an Evasive Action. Diego then untapped and played a Global Ruin, and in response Alan sacrificed a land and made 2 Goblin tokens, and both players lost 2 land. Comer attacked for 2, then Iced Diego's land on his upkeep. On Comer's next turn, Diego went down to 14, and Diego tried to Fact or Fiction, but Comer Absorbed it. On Diego's turn, he cast a main phase Worldly Counsel for 3, and then cast a Collective Restraint. Comer let that resolve, deciding to change his game plan to burn. Diego cast a Questing Phelddagrif on his main phase, and Comer responded with a Fact or Fiction, revealing Island, Fire/Ice, Fact or Fiction, Absorb, and Prophetic Bolt. Comer took Fire/Ice and Prophetic Bolt, and let the Phelddagrif resolve, and during Diego's end step, Iced Diego's only remaining Forest. During Comer's main phase, he cast a Prophetic Bolt on the Phelddagrif, and staring only at an Island, Diego was forced to lose the Phelddagrif. On Diego's next turn, he cast a Restock targeting Fact or Fiction and Global Ruin, and Comer let that resolve. Diego opted not to play the Ruin during his main phase, and during Diego's next end step, Comer cast Prophetic Bolt on Diego, which Diego let resolve, taking 4 and going to 10. Comer did the same thing on Diego's next end step, but Diego Evasive Actioned that one. On Alan's next end step, Diego tried to cast a Fact or Fiction, but Comer Absorbed it. Diego cast an Allied Strategies for only 3, still missing his Swamp and Mountain, but he drew a Swamp off of the Strategies and played it. Alan then cast a Fact or Fiction, revealing Coastal Tower, 2 Shivan Reef, Island, and Urza's Rage. Comer took the 4 land, and on his turn he paid 6 mana to attack for 2 with the 2 Goblin Soldier tokens, dropping Ostrovich to 8. Since Alan had only a Mountain and Plains untapped, Diego recast the Global Ruin, forcing Comer to lose 5 lands. Fortunately for Comer, he still had land in hand from that Fact or Fiction, and was still able to attack with his token. On Diego's next turn, he cast a Harrow getting out a Swamp and a Forest, and then cast a Pernicious Deed and an Overgrown Estate. On his next turn, Diego cast a Questing Phelddagrif, but Comer had a Rout, and Diego apparently had nothing whatsoever, as on his next turn he merely played a land and said done. During Comer's End Step, he cast a Worldly Counsel for 4, and after that the game progressed with the players just drawing lands. Finally, Ostrovich drew a Global Ruin, and attempted to cast it, but Comer had an Evasive Action for it. Comer got up to 11 lands the next turn, which means he was just 1 away from starting to cast his Rages with Kicker, but Ostrovich had plenty of lands out to sacrifice to his Overgrown Estate, and was at a relatively comfortable 6 life. After Comer played his 12th land, Ostrovich played a Dromar's Charm to gain 5 life, and with 10 lands out, he was basically at 41. On Ostrovich' s next turn, he cast his 3rd Global Ruin, sacrificing 3 lands in response taking him to 20, which Comer Absorbed, which Ostrovich Dromar's Charmed, which Comer Evasive Actioned. During Ostrovich' s next end step, Comer cast an Urza's Rage with Kicker on Ostrovich, which brought him to 10 life. Comer did it again on his next end step, and in response Ostrovich used a Dromar's Charm to gain 5 life, going to 15, then to 5. On Comer's main phase, he cast Rage with Kicker again, but Diego merely sacrificed 2 lands and went to 1 life. With all of Comer's Rages in the graveyard, Diego cast his 3rd Collective Restraint, and Comer conceded.

Comer sided out a good number of dead cards such as Repulse, Rout, and Exclude in favor of Gainsays, Aura Blasts, Dismantling Blows, and a few Rakavolvers, while Ostrovich sided out a few of his creatures for Voids and Disrupts.

Comer elected to draw first for the second game, and with only 19 minutes left on the clock, he could probably only expect a Draw at best. The first spell played was a Harrow during Comer's End Step, which Comer Absorbed. Ostrovich did not play a land on the next turn, leaving him with just 3 in play, while Comer had 5. Diego again missed a land drop, and Comer played a Rakavolver with both kickers, but Diego had an Evasive Action for it. Diego got his 4th Land the next turn, and cast a main phase Fact or Fiction revealing a Forest, Plains, Island, Evasive Action, and Overgrown Estate. Comer split the piles into Estate or the other 4, and Diego took the other 4 as he needed lands anyways. Comer continued to draw, play a land, and pass the turn, while on Diego's next turn he successfully Harrowed a Forest to complete his Domain. Diego cast a Global Ruin on his next turn, which resolved and was devastating. Comer lost 4 lands while Diego only lost 1. On his next turn, Diego cast a Collective Restraint, and after that the game went back to Draw-Go. Comer was apparently ready for the Ruin, however, as he did not miss a land drop after it was played. A few turns later, Diego resolved an Overgrown Estate, after which Comer cast a Fact or Fiction, revealing Plains, Battlefield Forge, Fact or Fiction, Fact or Fiction, and Urza's Rage. He took the 2 Lands and the Fact or Fiction, and on his next turn cast a Dismantling Blow on the Overgrown Estate. Diego Evasive Actioned, but Comer also had an Evasive Action, so the Estate went to the graveyard. Diego cast Global Ruin again, making Comer sacrifice another 4 lands, but Comer just untapped and Aura Blasted the Restraint. Diego then cast a Worldly Counsel for 5 during Comer's End Step, and in response Comer cast a Fact or Fiction revealing, Exclude, Prophetic Bolt, Aura Blast, and 2 Lands. Comer again opted for the 2 Lands and Aura Blast, and on his turn he cast a Rakavolver with the Blue Kicker. A Counter war was fought over the Rakavolver, but Diego ultimately won it with a Dromar's Charm followed by a Disrupt on Comer's Gainsay. With Comer tapped out, Diego was free to Restock a Collective Restraint and Global Ruin, and things began to look unwinnable for Comer when he ran out of lands to play with only 6 on the board and many of his Burn spells in his Graveyard. Comer attempted to burn him out, but with only 3 minutes on the clock and Diego at 18 life, there just wasn't enough time.