Round 12: Alex Shvartsman vs. Andrew Gordon 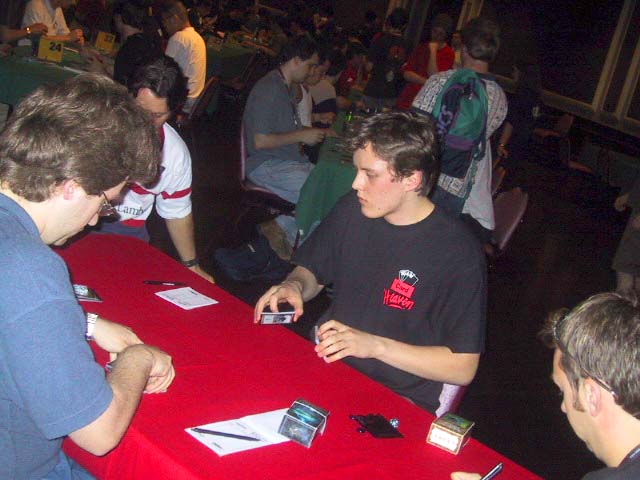 With only two rounds left the fight to make top 8 at GP Brisbane was really heating up, with both players needing to win their two remaining matches to have any chance at making their way into the top 8. Being the only American at the GP, Shvartsman was doing this one for the stars and bars.

Gordon won the die roll and elected to go first, screaming out of the blocks with a turn 2 Cephalid Scout, followed by a turn 4 and 5 Dreamwinder. Shvartsman's turn 3 Bearscape was no match for the monsters and he was forced to AEther Burst one of them at the end of the turn. After attempting to trade one of the Dreamwinders with his Aven Windreader, Gordon cast Shelter on his creature, gaining more advantage. Shvartsman was forced to go into damage control mode, casting a second AEther Burst on the two monsters and casting a Scrivener to return a burst to his hand. There was no relenting from Gordon, casting a Krosan Archer which joined the red zone the very next turn but Shvartsman had a trick up his sleeve. He bursted the scout and the Dreamwinder into Gordon's hand and blocked the archer with the scrivener, using Muscle Burst to finish it off. When Gordon cast Elephant Ambush at the end of the turn and sent his whole team into the red zone, Shvartsman really needed something huge to pull this one out of the fire. He recast Scrivener returning AEther Burst again and when the ambush was flashed back he bounced both the tokens but the damage had already been done. The Dreamwinders smashed him down on life and the Scout picked up the remaining points. 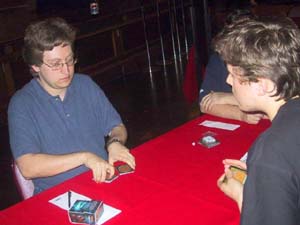 Electing to draw, Shvartsman's first spell was a turn 3 Cephalid Looter that was a more than adequate response for Gordon's turn 2 Cephalid Scout. Gordon once again kept the pressure on with a turn 4 Dreamwinder but during Shvartsman's turn 4 a small disagreement took place. Shvartsman looted during his main phase and accidentally discarded Moments Peace, thinking that it was actually Roar of the Wurm. As soon as he realized what he had done he changed the cards over and attempted to cast Roar of the Wurm. Gordon believed that the card had already been discarded and called a judge to question the play, but the judge ruled in Shvartsman's favor suggesting that it was simply a mistake and gave him a warning for misrepresentation. The game then progressed quickly over the next few turns with Gordon using his Scout to evade the ground bound armies of Shvartsman, pumping it up with a Nantuko Disciple.

Shvartsman, on the other hand, was looting up a frenzy dropping a Puppeteer, Bearscape and a Metamorphic Wurm, not to mention an AEther Burst which forced Gordon to recast his Scout. When Shvartsman finally looted into his archer it looked as though Gordon could no longer force through the last 4 damage that was needed to finish him off. Gordon attacked with the scout once again and Shvartsman blocked with the Archer, however instead of pumping with the discard effect Shvartsman Muscle Bursted the Archer forcing Gordon to sacrifice land to the Scout in the hope of drawing something worthwhile before it went to the graveyard. Shvartsman then bursted Gordon's only blockers and sent his own team into the red zone dealing a massive 10 points of damage for his first blood. When he cast Scrivener after the attack phase, returning an AEther burst. Gordon scooped up his cards and moved onto game 3. 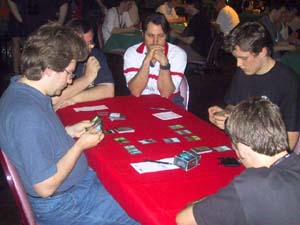 For the third time in the match Gordon cast a second turn Cephalid Scout while Shvartsman started off the deciding game with a Mossfire Egg. Before he could use the egg Gordon cast a Predict in Shvartsman's upkeep naming island and low and behold there it was, an island sitting on the top of Shvartsman's deck. After cracking the egg a Puppeteer joined the fray and all Gordon could do during his turn was to attack back with the Scout and say done. Shvartsman summoned an Krosan Archer and sent his Puppeteer to attack but it was met with an Elephant Ambush from Gordon taking it straight to the graveyard. Gordon cast an archer of his own and charged with the elephant and the scout dropping Shvartsman down to 15 life. It was then time for Shvartsman to begin dropping fat creatures with a Rabid Elephant and a Metamorphic Wurm the turn after. Both players then began to dump their hands with Shvartsman dropping down a Skyshooter plus a Cephalid Scout of his own, while Gordon played an Escape Artist and a Thought Eater. With Elephants crashing back and forth from both players the match hung in the balance until Shvartsman drew into a Muscle Burst and sent the token into limbo after blocking it with the Wurm. Gordon built his mana and flashed the Elephant back into play along with a Nantuko Disciple to help deal more damage through the Escape Artist. Once again Shvartsman had the second AEther burst and sent the Artist back to Gordon's hand. Gordon tried hard to press the attack once again with the elephant token and the escape artist a turn later but when Shvartsman sacked a land to his scout, and pumped his archer he hit threshold and the Wurm plus the elephant became too much for Gordon to deal with. An AEther Burst a turn later removed the last blockers that Gordon had and Shvartsman attacked for the final damage and the match win.