Round 12: Alex Shvartsman vs. Terry Tsang 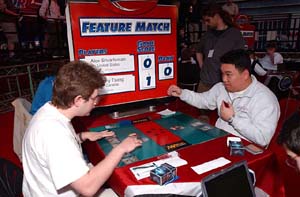 For only the fourth time in the history of the Pro Tour Feature Matches a player chose to flip the playmat around instead of choosing to who plays or draws first. Alex Shvartsman just couldn't make up his mind and despite being in contention for the Top 8 felt confident in taking that chance.

The Canadian got Gloomdrifter and another Organ Grinder on the table while Shvartsman dropped a Dirty Wererat. The next swing brought him down to thirteen and Otarian Juggernaut joined the Canadian army.

Meanwhile Shvartsman sat behind his Wererat using Deep Analysis to refuel his hand. Terry had other plans for the game so he used Aether Burst to get the Wererat out of the way and drop the American to a lowly five with one flier on the table.

Alex: "I was afraid that would happen."

A second turn Fiend from Tsang got Whispering Shade over Gravedigger, Repel, Zombie Trailblazer and Organ Grinder. But the Canadian was locked at two lands. His Fiend was way too little pressure to keep Alex back.

In came Organ Grinder and Repel slow down Tsang even further. The Fiend returned showing Cultural Exchange and Psychatog as well.

He took the Shade again and braced himself for trouble. Shvartsman played Zombie Trailblazer but couldn't stop Tsang from dropping Cephalid Looter. He attacked dropping his opponent to nine and played the big muncher himself: Psychatog. 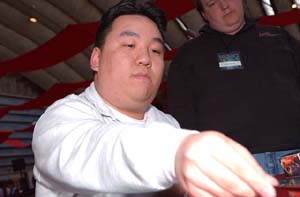 Terry Tsang considered his options for a few moments and dropped Otarian Juggernaut. Still the Zombie Trailblazer was more than enough to let the Psychatog through.

He counted the cards and found he had enough to finish things right there and then.

Shvartsman took a mulligan but was ready to Syncopate Tsang's second turn Mesmeric Fiend. He dropped a Phantom Whelp and the Canadian took the chance to play a better creature: Cephalid Looter.

The American hit his deck but still didn't get another land. Tsang tried to help him out with Words of Wisdom before dropping Dirty Wererat. Shvartsman did indeed find his fourth land and dropped a Patriarch's Desire to take out the annoying Looter. 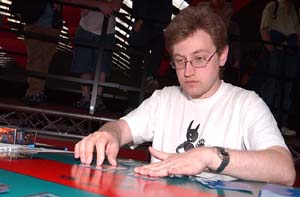 The Wererat started doing damage and Gloomdrifter showed up. But Alex had a bigger creature to drop when he found his fifth land: Aven Windreader. The Whelp and Gloomdrifter traded and Terry Tsang played Childhood Horror two cards away from Threshold.

Svhartsman stared at his hand for quite a while before coming up with a plan. He dropped Wererat on his own and passed the turn over with the table stabilized.

Tsang used the Wererat ability to reach Threshold and killed the Wererat with a big Patriarch's Desire. He then sent his crew in to drag Alex Shvartsman down to eight.

The American got two uses out of Crippling Fatigue to get rid of Childhood Horror going down to five life. He sent his Aven Windreader in and passed the turn.

Terry Tsang had enough to close the match. He attacked to bring Alex down to one and Soul Scourge finish things.

1 Last Rites 1 Roar of the Wurm