Round 12: Antoine Ruel vs. Pierre Malherbaud

This year, for the second time, Pierre Malherbaud won the French National Championship. Antoine Ruel is the calmer half of the Ruel brothers and has been having another great season this year winning Grand Prix Porto by defeating his brother in the finals. Apart from the two great French players I had the pleasure of having Cyril Grillon, Level 4 Judge and international man of mystery, as my sidekick in the feature match area.

Antoine opened up with a Razorfin Hunter and they lapsed back into the fabled French "vas-y" (Go) mode for a few turns. Ruel broke that abruptly with a Kavu Runner and Pierre took his cue by playing a larger problem: Questing Phelddagrif.

That confused Antoine so much he even said "your turn" for a change. The Runner and Phelddagrif ignored each other for a few swings until Malherbaud dropped a Stone Kavu prompting Ruel to punch his deck.

The Lava Runner sped into the Red Zone once again bumping into the Stone Kavu and Antoine replaced it with a kicked Faerie Squadron. Pierre thought long and hard about the way the game was going before sending the pink hippo in and dropping a Kavu Chameleon with no open Green mana.

A kicked Vodalian Serpent from Ruel's side put an end to any thought of ground attack and pushed Malherbaud back into the think tank. As the clock ticked away and Pierre thought Antoine got visibly nervous about losing so much time so early in the round. After what seemed like ages but were closer to a good five minutes Pierre woke up and sent both monsters in.

Ruel decided to rock the boat by blocking the psychedelic hippo with his Serpent. Pierre again thought about it for a long time and suddenly tapped all his mana to kick in a very Explosive Growth to take out the Serpent.

More of a quiet person Antoine attacked with his Faerie Squadron and dropped a second kicked Vodalian Serpent, which promised another long period of silence from Malherbaud.

Sure enough the tick-tocking of the clock and yours truly's keyboard became the only sounds but just for a few seconds. Malherbaud went into overdrive dropping a Gaea's Skyfolk, Spirit Weaver and Urborg Elf to fill up his side of the table. It was Antoine's time to lapse into worried silence.

He played a Bloodfire Infusion on his Razorfin Hunter (who had been nibbling away at Pierre since the third turn), tapped it and sacrificed the enchantment to finish the game of.

They grabbed their sideboard while still discussing the tough decisions on the very last long turns and trading jokes with Cyril. An amusing, yet quiet, shuffling period later they were ready for the second game.

Pierre dropped a Spirit Weaver and Antoine played a Sisay's Ingenuity on it to nullify it. The Weaver attacked alone for a couple of turns until an Aurora Griffin joined him. Antoine finally got a creature on the table in the big shape of a Kavu Runner. 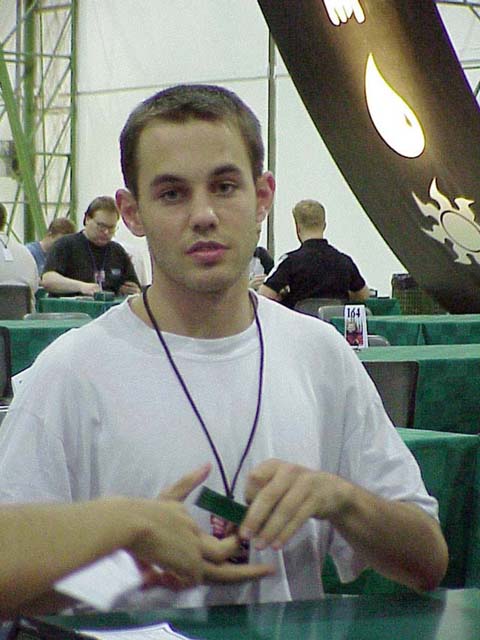 Malherbaud is also a fan of big creatures so he dropped a Stone Kavu. That fitted very nicely in Ruel's plans since he had a Hunting Drake and immediately used it to bounce the Kavu and trade it for the Griffin.

The Stone Kavu came in and Ruel bounced it right back with a second Hunting Drake. Malherbaud played a different creature this time: Questing Phelddagrif. The problem was he had no White mana open after doing that and Antoine was ready with a Terminate.

Pierre: "You have everything!"

Pierre (drawing a land): "I wanted something but it sure wasn't this."

The huge Serpents swam in once again and Pierre's two remaining creatures jumped in the way. He now had no cards in hand or non-lands permanents in play.

Pierre (going into his draw step): "The right card at the right time?"

It wasn't. So he conceded and they went back to discussing their draws and the round.