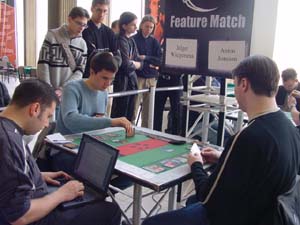 As these 2 PT Top 8'ers sat down Anton opened up the pleasantries with "Do you want to scoop?"

Jelger laughed and declined, to which Anton replied, "There's just no gratitude... you know I gave him the draw in New Orleans."

They went on to talk about Raphael Levy's deck from the same table, but had differing opinions. Anton thought they were both lucky to beat him, whereas Jelger didn't rate Levy's deck too highly having not seen much of it...

These 2 Masters competitors haven't played since the ID in New Orleans that put them both into top 8.

Jelger won the coin flip, and decided to go first.

Both players kept their opening hands, Jelger's being full of gas, with 2 Lavamancer's Skill, an Echo Tracer, Shock and Mages Guile but only 2 lands. He cycled the Guile on turn 3 to find the third land, but missed, and had to pass the turn.

Anton's meanwhile had played a Riptide Biologist and Morph Creature, and on turn 4 traded his Morphed Biologist for Jelger's Morphed Ascending Aven.

Jelger still couldn't find the 4th land, so was forced to make another Morph and pass the turn. Anton Cast Screaming Seahawk and searched for his buddy, and attacked Anton down to 16.

Jelger finally found the 4th Land, unmorphed his Riptide Entrancer and placed a Lavamancer's skill on it to kill Anton's Morph. Anton Pinpoint Avalanched the threat in his turn, and passed the turn playing no more creatures.

Jelger unmorphed his Echo Tracer and bounced a Voidmage Prodigy, then Cast the 2nd skill on the echo tracer and tapped it to kill the Seahawk.

Anton commented "wow, that was nice" 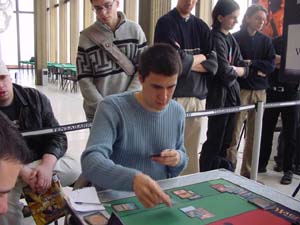 Jelger targeted it with an Erratic Explosion on his turn, flipping the Skittish Valesk, and smiling "It's enough"

The game then changed, as Anton played a Lavamancer's skill on his Mistform Wall, taking out the Echo tracer who impotently had nothing to shoot in response. Jelger answered with a Macetail Hystrodon, looking to race, but Anton had a Craghorn, which in cahoots with the Skilled up wall was enough to finish off the Hystrodon.

The Wall dominated at this point since Jelger had only 2 toughness guys in hand, and Screaming Seahawk was beating down at pace, well 2 a turn at least. Anton was trying to avoid playing his Searing Flesh for the win, but when Jelger dropped the Butcher Orgg, Anton felt it was time to finish the game.

Anton and Jelger talked about the draft during sideboarding, Anton saying that given a choice between Skill and Cruel Revival, he always takes the skill. Jelger didn't agree.

Both players kept their hands for game 2, and both players came out with early drops, Jelger's Imagecrafter and Morph facing off Anton's Alchemist and Mistform Wall. Anton Crucially had no 4th land, and no Red mana, but then Jelger was also stuck at 3 lands so both players played out Morphs with wild abandon.

Jelger unmorphed his Ascending Aven and attacked for first blood on the next turn. Anton attacked back, trading his morphed Battering Craghorn for a Master of the Veil before making another Morph.

Jelger still had only 4 lands, but both colors while Anton only had 3 Islands. Jelger's aerial beats continued to put Anton on 11, but then Jelger dropped the bomb... land number 5 which he used to make Mistform Shrieker.

Anton bounced it by unmorphing Echo Tracer at end of turn, before playing a 4th Island. "How Lucky!" Jelger declared, but chuckled when Anton could only muster another Morph.

Anton finally drew a Mountain on his turn, and cast Lavamancer's skill on his wall, and using the alchemist killed an Echo Tracer and an Ascending Aven. It looked good, but was too late since Jelger attacked Anton to 2, then cast Erratic Explosion for the kill. 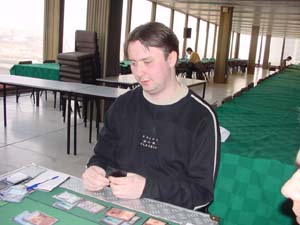 "Stupid Red Lands" Anton moaned as they shuffled up for game 2, knowing that if he'd had the mountain on any of 5 turns earlier, he could have stabilized fairly comfortably.

Anton passed the next 3 turns without doing anything, while Jelger made a Morph and a Warped researcher off the top.

Jelger unmorphed the Valesk on his attack to take Anton to 7, but Anton could only tap his 7 mana and make Kilnmouth Dragon to block the Valesk, which felt like a good trade to Jelger.

With Anton at 4, he played out a Mistform Dreamer to put lethal Damage on the table. Anton had no answers, and revealed his hand of 2 toughness dorks and scooped.