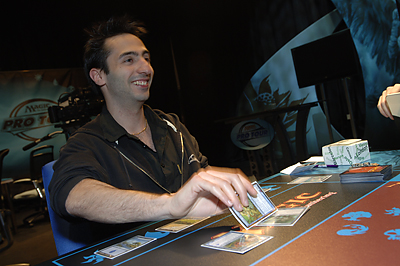 Raphael Levy: Beware a smiling Hall of Famer.Due to the extensive Grand Prix circuit and testing community, European players have formed a strong camaraderie. That being said, they still like to get their jabs in when they can.

"Do you have a good sideboard?" Levy asked Maaten after noticing that they were both peering through their extra cards before the first game.

"Yeah, but I don't think I'll need it against you," Maaten coolly replied, while flashing Levy a little grin.

Raphael got a chance to set himself up for a good game with a Ponder on the first turn, but after he had ordered and almost replaced his deck, he couldn't remember whether or not he had placed them in the correct order.

"Man, I'm so stupid," Levy exclaimed as he reached for the pile again to recheck the order.

Maaten played a Fertile Ground on his Forest, trying to set himself up for a good opening game as well. Things were about to get interesting. A Merrow Commerce from Levy hit the table along with an excited "Ooh!" He sounded like a kid in a candy store. Much like Rogier, I was curious to see what Levy had that made the Commerce worth playing. Whatever it was, it was going to have to show up soon, because Maaten took advantage of his extra fertile soil to grow a Leaf-Crowned Elder. That prompted an "Ooh" from Levy, but this one sounded more like a kid getting punched in the stomach.

After catching his breath, Levy revealed why he was so pleased earlier with his Merrow Commerce. Drowner of Secrets is quite the beating when you get to use his abilities twice a turn! He decided to mill what he could before Maaten could use the Elder's kinship ability. He hit Oakgnarl Warrior and allowed himself a relieved sigh. His second activation revealed a Footbottom Feast that could have put the massive Treefolk Warrior back on top of the deck any time Maaten wanted. I'd say that he made the right decision, even moreso since Maaten's kinship didn't reveal a Treefolk or Shaman.

Maaten, ever the party pooper, decided to end the Drowner before it could do any more damage.

"Shriekmaw! What! You can't do that to me," said Levy. "I had the perfect draw, and you just kill me! I don't want to play in the feature match area anymore."

When he played a Fallowsage the following turn, it all made sense. He dragged the Drowner back to sit nicely between the Merrow Commerce and the Fallowsage. "See, you killed that draw." When Maaten's kinship tossed an Ambassador Oak into play, Levy didn't really want to play the game any further.

"Your draw was so good there. Man, mine was too though," Levy laughed after his drubbing was complete. "I suppose I could have had a Summon the School, but you can't ask for everything." 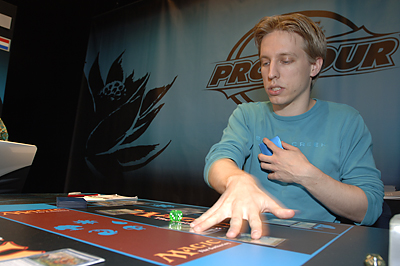 Rogier Maaten's Treefolk are out in force.Levy once again was the first to contribute something to the board, but his second-turn Silvergill Douser got a Lignify. When Levy played another Merrow Commerce the following turn, he sighed at his now useless Douser. "Wah, wah. . ."

Maaten went to town over the next couple of turns adding a Battlewand Oak and a Bog-Strider Ash to his team. All Levy could muster was an Avian Changeling. He was really struggling to catch back up, and his deck wasn't really cooperating. He wasn't able to find a land to play on either turn four or five. He was able to counter an attempted Shriekmaw with a Faerie Trickery, keeping his lone blocker around. When he used Burrneton Bombardiers to reinforce his Changeling and take out Maaten's Bog-Strider Ash, all of a sudden he had a decent presence. Avian Changeling plus Merrow Commerce plus two reinforcement counters equals a Serra Angel. Not bad for a guy with only three land.

While Levy was busy pumping up his lone creature, Maaten was still adding creatures to the board. Orchard Warden provided him with another fat body and the life needed to keep him ahead of Levy's faux angel. Levy did manage to find a fourth land eventually, and bolstered his own team with a Changeling Sentinel.

Maaten's Orchard Warden ate the Lignified Douser that had just kind of been hanging out blocking Maaten's Battlewand Oak since turn three, and then gained him an impressive 6 life when he played another Orchard Warden after combat. Playing the second Warden left Maaten at only one card, but threatening to gain an absurd amount of life if his deck kept the Treefolk coming.

Levy decided to Ponder a way out of the situation, and found himself a second Plains so he could play the Meadowboon he'd been holding for much of the game. Maaten did find another Treefolk, and the Black Poplar Shaman he drew put him all the way back up to 20, as well as allowing him to send his whole team in on offense. Levy tossed his large Avain Changeling in front of a 3/5 Battlewand Oak and threw his Meadowboon in front of one of the rampaging Wardens. When Maaten showed him an Earthbrawn to reinforce the Battlewand Oak, he let out an exasperated "Come on!" There was nothing he could do form that point, and he conceded rather than continue the ash kicking.