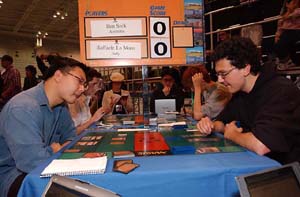 Everyone knows "The" Ben Seck, Australia's goodwill emissary to the Pro Tour. He's a recognized public figure. However, despite the prestige Seck enjoys on the Tour, and his two Grand Prix wins, he's never won a single dollar at the Tour itself. That's about to change with this event, as his performance has put him solidly in the money. He's up against Raffaele Lo Moro, who's not optimistic about his chances. His draft went abominably, and now his mono-black deck is stuck playing some benchwarmers. Seck is much more secure in his red-blue.

Seck led with a morph and Lo Moro answered in kind. Seck played his fourth land and swung, but Lo Moro was willing to risk the Craghorn, so he blocked. They traded Skirk Commando and Spined Basher. Seck set up his deck with Sage Aven. Lo Moro tried another morph, and Seck cracked it with Pinpoint Avalanche. Another Basher.

"What? Who plays with those?" – Ben Seck

Lo Moro tried yet another morph, and Seck took to the sky with Thoughtbound Primoc and a morph of his own. Lo Moro had no play. Seck played a morph and sent for three in the air. At the end of turn, Lo Moro tried to shut down the Primoc with Cruel Revival, but Seck revealed the Willbender he'd just played, turning the Revival on Lo Moro's own morph, yet another Spined Basher. 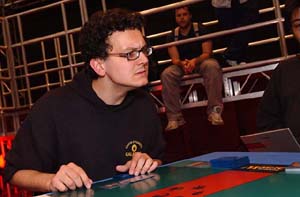 From there things were not pretty. Seck's Echo Tracer and Skirk Marauder ruled the board, while Lo Moro played straight up to eight lands for his Smokespew Invoker. After Seck got rid of it, Embalmed Brawler was too late to salvage things, as Seck had his seventh land for the Searing Flesh in hi hand.

Lo Moro mulliganed, but quickly accepted his new six. Seck was happy with his opener and they were off. Lo Moro opened with Festering Goblin. Seck answered with Skirk Drill Sergeant, but Lo Moro dropped a 5/5 Embalmed Brawler, revealing a hand of 3/1 zombies. That put Seck on the back foot. He made a Mistform Wall and passed it back.

Lo Moro charged. Seck let it by. He added Smokespew Invoker to the table. Seck frowned at his hand, then put out a Battering Craghorn.

Lo Moro was undeterred. He dropped a fifth land and Cruel Revival, before swinging with his 5/5 monstrosity. Seck chumped. He tried a Callous Oppressor, but Lo Moro naturally chose zombies, and it was just another chump blocker. The Drill Sergeant traded with the Invoker, but the Brawler was unrelenting. A morph from Lo Moro signaled what looked like it would be the end. Seck had one last-ditch play. He tried a face-up Willbender ("Dutch Style!"), and planned to Pinpoint the morph on Lo Moro's turn. Lo Moro had other plans. He untapped and showed his morph to be Skinthinner for the poor 'Bender, taking the game. 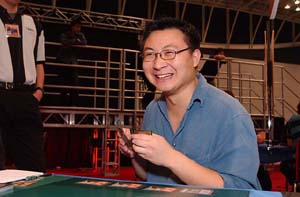 Lo Moro led with Barren Moor, meaning his Festering Goblin got to the party late. Seck got busy with Thoughtbound Primoc and Lo Moro answered with Severed Legion. He took three damage and watched as Seck laid a morph. On his fourth turn, Lo Moro paused before sending for three damage. He played a face-up Haunted Cadaver.

Seck played his fifth land and Pinpoint Avalanche, clearing the way for four more damage. That gave Lo Moro pause, and he merely hit for two. Five mana turned out to mean Noxious Ghoul, not Cruel Revival, and he gave it back to Seck. Seck hit for two in the air and made a morph with three mana open. Lo Moro untapped and then tapped three.

Seck was less than impressed. He unmorphed Echo Tracer to send the Noxious Ghoul home, then untapped and swung in. Festering Goblin tried to take down the morph, but it was Willbender, so it survived. Lo Moro stood at ten. Seck, eleven. Lo Moro couldn't resist the urge to swing with his Legion, and replayed his Ghoul. That was exactly what Seck wanted to see. He busted into the red zone with all his guys, then flipped over the Searing Flesh in his hand.