Round 12: That Bitter Taste

“I don’t know why I keep getting feature matches. The only things I’ve won are FNMs,” PT–Berlin Top 8 competitor Tommi Lindgren said in actual astonished disbelief. “I’ve had two at this Pro Tour.”

“They must like you,” Martin Juza said as he flashed Lindgren a big smile. 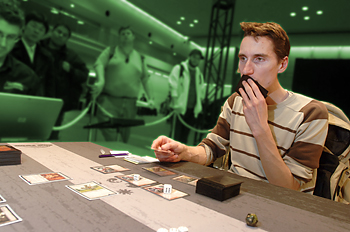 Tommi Lindgren figures it out.Juza started off strong with a Windbrisk Heights and a Bitterblossom. Lindgren had a pretty good start himself, and his Figure of Destiny and Boggart Ram-Gang curved into Juza fairly nicely. Juza had a Marsh Flitter on his turn to grow a few more potential blockers, but it was quickly Incinerated by Lindgren. When Juza stuck two tokens in front of Lindgren’s Figure, a Magma Spray made sure that the losses were all Juza’s.

Juza rebuilt with one spell, as seems to be the theme this weekend. A Cloudgoat Ranger gave him a few Kithkin before meeting its end on the wrong end of a Flame Javelin. His Kithkin avenged him, though, taking the Figure of Destiny out. That left Lindgren with a lone Boggart Ram-Gang with Juza still at 13 life. His Bitterblossom was ticking away, but it was far from life-threatening.

On Juza’s next turn, he played a Soul Warden before playing a Cloudgoat Ranger. Before Juza could gain any life, Lindgren aimed a Magma Spray right at the poor Cleric’s head. Lindgren then sent his Ram-Gang into the swarm of creatures on Juza’s side. It didn’t make it out alive, but at least it took the Cloudgoat Ranger with it. Juza needed to keep as many creatures alive as possible to eventually activate the Windbrisk Heights he had dropped on the first turn.

Lindgren replaced his dead Ram-Gang with the slightly larger Shambling Remains, but it was still his only creature on the board, and Juza wasn’t necessarily in any danger of being burned out just yet. Things definitely swung hard in Juza’s favor on the following turn. A Glorious Anthem hit the table to enhance his six creatures. He sent most of them in and finally activated that Windbrisk Heights to play a very cheap Marsh Flitter.

Lindgren’s Shambling Remains weren’t really designed to hold down the fort, so he sent them into attack. They ate a token, but one token out of like fourteen didn’t really put much of a dent in Juza’s massive army. The Goblin Outlander, while usually good in this matchup, came down a few turns too late to really shine. With the next two attacks coming for a bazillionty in the air, Juza’s massive swarm finally did Lindgren in.

“I think this is one of the worst matchups for me. Well, when you play Bitterblossom,” Lindgren revealed, prompting an incredulous look from Juza.

“Really? I think this is one of the worst matchups for me!”

After a brief discussion on the finer points of selecting a deck that has a difficult matchup against the most popular and arguably strongest deck in the field, the players drew their hands. Less than a second after seeing his opener, Lindgren fired out a quick “Keep.”

Juza’s eyes got a little wider as he pursed his lips. “That was quick.”

Juza’s decision was not so quick. After holding his starting hand about a foot away from a head buried deep in his other palm, he simply declared “Nope” and started to shuffle.

Lindgren started with another very aggressive opening draw. His Figure of Destiny was joined by a second copy and then a third as each of the first two copies were upgraded to level two. Unfortunately for Lindgren, Juza had a Burrenton Forge-Tender and a Knight of Meadowgrain for his first two turns. If there’s anything his aggressive Red deck hates, it’s a deck packing pro-red creatures and lifelink.

The fact that he didn’t have a third land for the Boggart Ram-Gang in his hand didn’t help matters, though he was able to make the most of it. When the Knight of Meadowgrain attacked in for the second time, Lindgren put him to the test. He aimed an Incinerate at it forcing Juza to decide whether or not to save it with Burrenton Forge-Tender. He decided the Forge-Tender was better for him and let the lifelinker die. 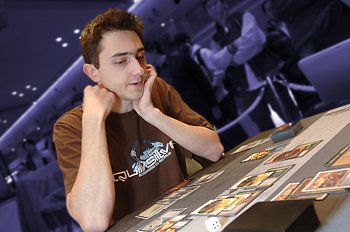 Martin Juza puts up a spirited offense.Juza got himself three copies of a creature on his turn, though the Spirits from his Spectral Procession weren’t exactly in the same league as the Figures of Destiny they were staring down. When Lindgren sent his three Figures across the table, Juza chose to simply block the one that was still a 1/1 rather than get blown out like he had in the first game with a multiple block. Lindgren just pumped his 1/1 to level two and passed the turn back.

Juza completely solidified his control over the mana-screwed Lindgren with a Marsh Flitter that served the dual purpose of giving him an additional flying attacker as well as giving him some groundling blockers to buy him enough time to finish Lindgren off. When Lindgren failed yet again to draw a third land, he had no choice but to pass the turn.

Juza’s team rallied under a Glorious Anthem and smashed the daylights out of Lindgren and his small defenders. Two of the Figures bought the farm to Goblin tokens, and Lindgren dropped to single digits. After combat, Juza played a Tidehollow Sculler that revealed a hand containing two Volcanic Fallouts and multiple copies of Flame Javelin, all just begging for a third land to release them. Unfortunately, it was too late for them to matter. Even if he could somehow draw the land to Volcanic Fallout, the Burrenton Forge-Tender was still around to keep the team kicking. Lindgren knew this and conceded. Afterwards he lamented about how different the game would have been if he had drawn the third land anytime in the early stages of the game.

“I just needed that third land. I could have pumped my Figures more and forced you to save your creatures from the first Fallout before clearing you out with the second.”