Round 12: Blake Quelle vs. Jerry Ellenburg 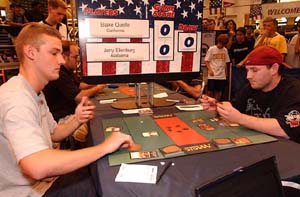 The winner of this match would most likely make Top 8. Quelle is a former JSS competitor who had back-to-back Top 8 finishes in this very venue in 1998 and 1999. Ellenburg arrived in Orlando unqualified, made his way in through a grinder, and now finds himself one match away from the Sunday stage.

Quelle went first, and brought out a second turn Patrol Hound. He followed that up with Skywing Aven, while Ellenburg missed his third land drop, and played Mad Dog. The Dog blocked the Hound, and Quelle Discarded Angelic Wall to give it first strike. He then summoned Hydromorph Guardian. Ellenburg never drew a third land. 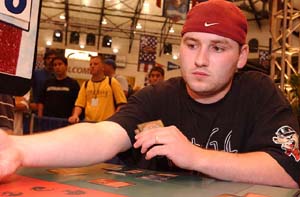 Ellenburg cast a second turn Mad Dog, which Blake matched with Angelic Wall. He then built up his side more with Phantom Nomad. It took a hit from Firey Temper, and Ellenburg summoned Chainflinger. Quelle cast Acorn Harvest, while Chainflinger took down the Nomad. Arcane Teachings made the Mad Dog huge, and at this point, Quelle had still not drawn a blue source of mana. He brought out Rabid Elephant, while Chainflinger took down the other squirrel. Ellenburg played Soulcatcher, while Quelle's Elephant got through for three damage. Still, Ellenburg's army was growing, as he brought out a Barbarian Lunatic. Quelle was still lacking an island. One never came, and Firecat Blitz sealed the game.

Quelle shuffled up, pulled out a beaded Irish Clover necklace, and put it on. 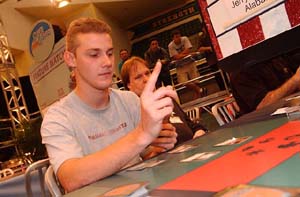 Quelle started off with Compulsion, followed by Hydromorph Guardian. The curve continued with Acorn Harvest, while Ellenburg had Dwarven Driller. The Guardian attacked for two, and Acorn Harvest was flashed back. Quelle discarded Valor to Compulsion and sent his team into the Red Zone. He then cast Keep Watch to draw five cards. Ellenburg still had all the land in the world, and only a Dwarven Driller to show for it. Quelle charged with his whole team, and Ellenburg pitched his hand to Vengeful Dreams for four, discarding three lands and Ray of Distortion. Quelle had a Syncopate to stop it, and easily came through for the win on the next turn.