Round 12: Bob Maher vs. Darwin Kastle 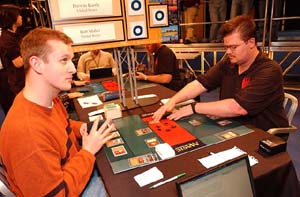 PT Chicago 1999 champion Bob Maher has been on fire since his return to the Pro Tour a few months ago. He has a Grand Prix win and a Pro Tour top 4 under his belt so far this season, and is hot in pursuit of another Pro Tour top 8. Kastle has been a Pro Tour staple. In fact, he remains the only player who has played in all the PT's. He had a poor year and needed a top 32 finish in this tournament just to qualify for Chicago. Kastle started the weekend at 10-0 and is now guaranteed the top 32 he so much needed – the question is which of these players will be able to compete on Sunday. Maher is playing a Sutured Ghoul combo deck he and Neil Reeves got from the Dutch, while Kastle is running The Rock – one of four different decks brought to this tournament by Your Move Games.

Kastle opened with Duress, seeing a bunch of land, Mox Diamond, Sutured Ghoul, Vampiric Tutor and Cabal Therapy in Maher's hand. The real choice came down to Therapy or Tutor, and Kastle elected to take Vampiric Tutor. Maher reciprocated by casting Cabal Therapy, but guessed wrong – he found no Diabolic Edicts in Kastle's hand. He did see a Vampiric Tutor however, which meant Kastle could go get that crucial card at will. 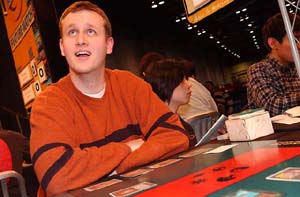 Both players developed their mana base over the next few turns. Kastle summoned Birds of Paradise and a Llanowar Elf while Maher just laid down lands. Kastle hesitated for a few moments wondering if he should Tutor for anything. "Draw phases are good" he commented, dismissing the idea. Kastle attacked with Treetop Village and Llanowar Elves, beginning to put pressure on Maher to try and go off soon.
Tutor finally came in handy when Maher summoned Hermit Druid. Kastle went to get Chainer's Edict. When Kastle cast the Edict, Maher responded to it by casting Entomb to put Anger into his graveyard. This allowed him to activate Hermit Druid and since the only basic land in his deck – a Mountain – was already in play, Maher just dumped his entire library into his graveyard.

During his upkeep, Maher cast Krosan Reclamation with flashback targeting two copies of Exhume. Maher cast it bringing Sutured Ghoul into play and removing a load of creatures from the game to make it 33/32. With Anger still in the graveyard, he was able to immediately attack for the win. 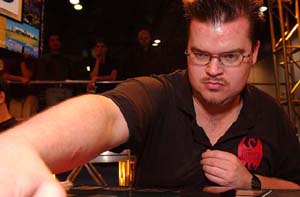 Kastle spent several minutes considering whether or not to keep his draw, consisting of Bird, Yavimaya Elder, and five lands. He finally chose to keep it and opened with Birds of Paradise. Maher's opening hand was much better. He pulled off its signature draw of land, Mox Diamond, Hermit Druid. When Kastle summoned a Yavimaya Elder, Maher tapped the Mox on his upkeep to Vampiric Tutor for Reanimate. After he drew that, Maher activated the Hermit, milling about half his library to get to the lone Mountain.

Going down to nine life (after all the pain land damage), Maher Reanimated the Sutured Ghoul and made it 16/15. He removed Anger from the game as one of the creatures to feed the Ghoul nor did he lay the Mountain, so Kastle got one extra turn to try and deal with the giant monster. Kastle sacrificed Yavimaya Elder and was fortunate enough to draw an Edict off its ability. Edict took out the Hermit, but a 16/15 creature problem still remained. Kastle was a turn behind from being able to Deed away the board – but even if he wasn't, Maher had a Ray of Revelation in his graveyard.

The Ghoul deck pulled off a perfect draw, leaving Maher at the same record as his opponent – 10-2. Each of them needs to win one of the next two matches in order to guarantee themselves a spot in the top 8.