Round 12: Boyd Hardie vs. Jason Howden 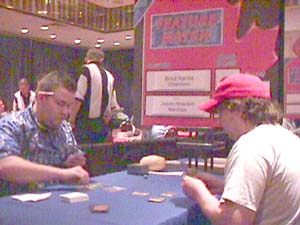 Boyd Hardie came into Nationals with his eyes on the prize, but his outgoing personality kept his attitude light through the first day of play. Not so today. The boisterous bar-hopping behavior of yesterday has been replaced with grim determination. There are no ribald anecdotes, no jokes about his plus-size wardrobe. There is only this match, and then the Top 8. His opponent, Jason Howden, seems dressed with the express purpose of forcing out a chuckle, what with his jaunty chapeau and "Canadian National Drinking Team T-Shirt". However, he's no less thirsty for the win.

Hardie started with Anurid Barkripper and Phantom Nomad, trading damage with Howden's Nantuko Tracer. He threatened to move even with Stern Judge, but Hardie put the kibosh on that with Nantuko Calmer. Howden had nothing further on his fourth turn, and passed it back.

Hardie swung in with Calmer and Nomad. Howden doubled up. Hardie showed him Spirit Flare. Howden's mood darkened. He thought, but had no response. Hardie targetted the Judge. Prismatic Strands for green made the save. Howden counterattacked for four and made a Vigilant Sentry. Hardy returned the favor and made a Militant Monk. 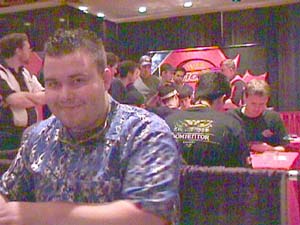 Hardie turned his men sideways, keeping the Monk out of harms way. The Sentry and Judge hit the Calmer, and the Tracer stepped up to the Barkripper. Spirit Flare let the Monk shoot the Sentry. Howden used a Flare of his own to make sure the Calmer died. He reused it to try and kill the Barkripper. Hardie played Sylvan Might. Flashed back Prismatic Strands against green kept Howden alive.

On his turn he had no play. Hardie attacked with all his men. Howden played Elephant Ambush and blocked as best he could, but he had nothing to stand in the way of Sylvan Might out of the graveyard.

The silver flames on Hardie's hundred-dollar shirt reflected the fire in his eyes. He held back a whoop of delight when Howden declared his intention to paris. Howden's six weren't great either, and he stalled at two lands. Hardie windmilled Call of the Herd.

"Pretty proud of that, aren't you?" - Jason Howden 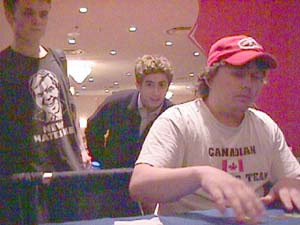 It was flashed back and the beatings began. Hallowed Healer showed up in time to watch Hardie forget to play Mirari's Wake before attacking. His ebullience at his opponent's manascrew was clouding his Judgment.

It just didn't matter at all. Sudden Strenght foiled an attempted double-block, and then Hardie dumped a pair of Calmers on the table. Howden just shook his head and scooped up his cards.

But nothing could have prepared him for what happened next. Hardie strode out of the Feature Match Area and into side events. Along the way he managed to lose his overshirt. His undershirt followed, and he stood shining like a monstrous pink marshmallow, his gut cascading over his belt. With a bellowing "Woooooooooo!" he announced his ascension to the Top 8.