Round 12: Bram Snepvangers vs. Rouven Korzetz 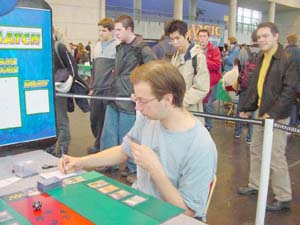 Bram is still reeling from the beating he got last round at the hands of Patrick Mello's Sligh deck and finds himself at 9-1-1 going into this round, still toting his trusty Rock deck. Rouven Korzetz is not that well known internationally but he's been tearing up the opposition here in Reims with a Suicide Black deck featuring Plague Spitters.

Rouven played first, giving him the ability to put Bram on a very fast clock. He had no turn 1 play but he managed to Snuff Out Bram's first turn Bird. A Wretched Anurid came out on turn 2 and was soon to be joined by a Plague Spitter, ready to kill Bram's second Bird.

Bram wrecked Rouven's hand next turn with a Duress and a Therapy, using the Bird that was about to die to get rid of Rouven's Duress and two creatures. The Anurid and the Spitter were still in play though and when Rouven drew a Carnophage off the top, Bram couldn't find a Deed on time and packed it up. 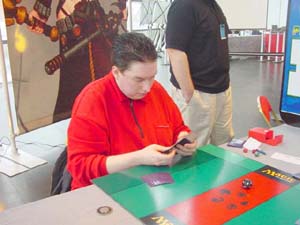 With Bram going first this game his chances to shut down Rouven's offense increased dramatically, once again proving how important the die roll can be in this format. Decks like Suicide Black and Sligh that can kill on turn 5 with disruption backup are a lot easier to handle when you get a chance to play some spells before they get their creatures in play.

All this theorizing is fine and all but when you don't draw lands there's not much you can do against any deck. Bram chose to keep an all forest hand with 4 black spells and paid for his greediness, finding himself on the wrong end of a horde of little black beaters. A last-ditch Masticore got Snuffed Out and there was nothing much he could do.

Game 2 and the match to Rouven who needs to win two more rounds to make top 8. Bram, on the other hand, has to win out after his excellent start after losing to two seemingly favorable matchups. Apparently the idea of the Rock beating beatdown decks is outdated though as Sligh is currently occupying the top two seeds with many Suicide decks not trailing far behind.